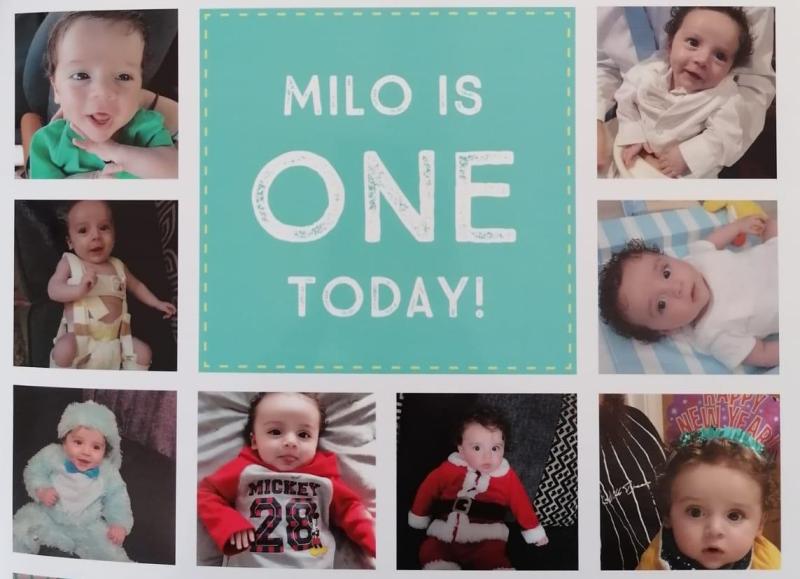 Twelve months ago baby Milo was fighting for his life on a ventilator with his parents by his side.

Last week, his father Sean Johnston and mother Karen Doherty were overjoyed to celebrate their son’s first birthday at home in Derry.

Midway through Karen’s pregnancy it was discovered that her unborn baby had Congenital Diaphragmatic Hernia or CDH for short.

It is a rare potentially fatal abnormality which occurs in approximately 1 in 2,500 births and accounts for around 8% of all major congenital abnormalities.

In these uncommon cases, unborn babies develop a hole in their diaphragm, the thin sheet of muscle separating the chest from the abdomen, which can allow the stomach, liver or bowels to move up through the gap into the chest cavity, squashing the lungs and, in the worst cases, leaving them too underdeveloped to allow breathing after birth.

The past year has been challenging, a journey of ups and downs as Milo recovered from a life-saving operation and overcame bronchitis on several occasions.

While researching and doing everything to ensure their unborn child had the best possible chance of survival, the couple also had to devote time to care for their other much-loved boys Ethan (8) and Jake (2).

Milo’s condition was first detected at Karen’s 20-week scan when they were told that his stomach had been pushed up to his chest cavity and his heart was on the wrong side.

A consultant was able to diagnose CDH but it still had to be confirmed by a specialist at the Royal Victoria Hospital in Belfast.

The couple were given news that no expecting parent wants to hear, that their unborn child had a 50% chance of survival.

It came as a hammer blow and that day was a complete blur.  Sean said: “We were in shock, you just don’t know what to do.  We wanted to know what happens next.”

Making it to full-term was far from certain.

Travelling to Belfast for scans became the norm but they remained positive.

At 28 weeks a lung-to-head ratio was measured to determine a prognosis.  There hopes were diminished.

Karen was admitted to hospital early, May 7.  The baby’s due date was May 24 but leaving it any later would have worsened his chances of survival.

Milo would need an intensive care bed immediately after he was born, there were none available at time of admission which raised concerns that Karen may have to be transferred to a hospital in Dublin or even England.

Fortunately, a bed was free just in time.  Sean explained: “Doctors said that when he is born he will be the sickest child in Northern Ireland at that time until we get him stabilised.

“They don’t know what complications are there until he’s born, does his heart work, if he can breathe or if he can’t or if anything else works.

“They didn’t want Milo to cry when he came out because that allows air into his lungs, which puts more compression on them and is more damaging, but he did.” 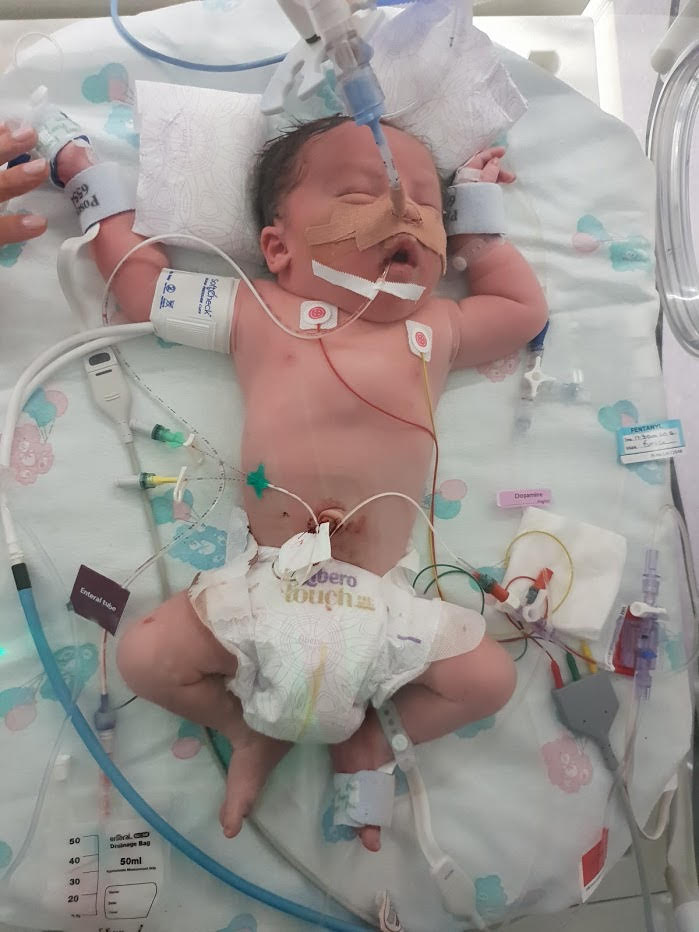 A ventilator was set-up and numerous doctors awaited his arrival.  The couple paid tribute to all staff but in particular consultant paediatrician, Dr Sweet, who was ‘amazing’.

“He kept us positive and assured us he’d do everything in his power to keep him here, ‘as long as he’s willing to help me he’ll survive’,” Sean said.

“He couldn’t make any promises but said, ‘as long as he’s strong enough I’m not going to give up on him no matter how long he stays here with us’.”

As the senior consultant on call that day, Dr Sweet delivered the baby at 4.21pm.

The baby was immediately whisked away to be placed in an incubator and ventilator and they didn’t see him again until 10pm that night.

“It was the longest time of our lives,” Sean recalled.

“You keep checking to see if there’s any word back.  We heard back once in that time that they were still trying to stabilise him.

“We were taken to see him while he was hooked up to a ventilator with lines in his ankles, in his bellybutton, on his wrists.  He was on mountains of medication for his heart, blood pressure, fentanyl for pain relief amongst other things.” 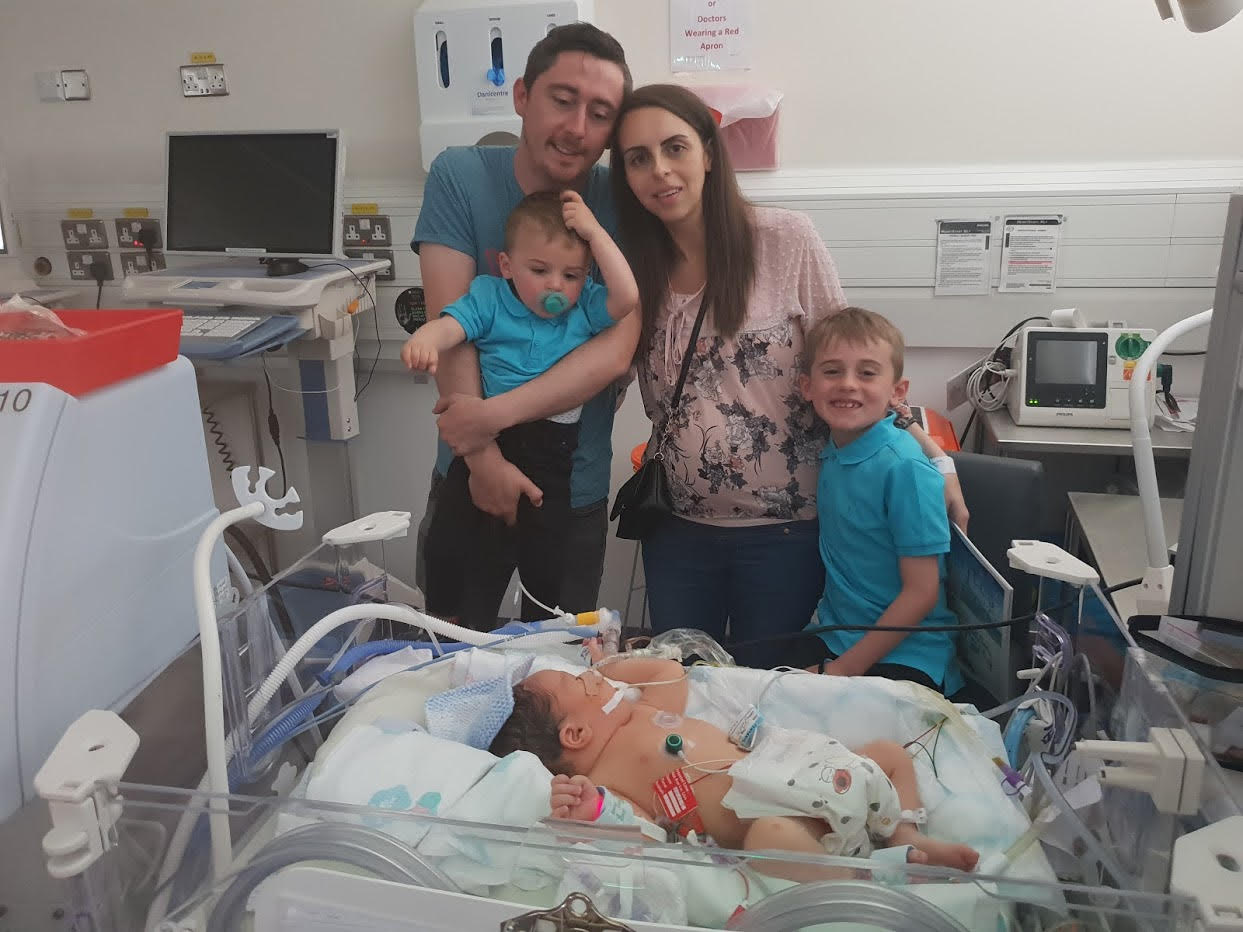 The baby’s grandparents got a chance to see him and they were driving home to Derry when Karen and Sean were told that he may not make it through the night.

A baptism was quickly arranged and their parents were phoned to come back for the service.

Names had been discussed, Milo being shortlisted.  But as if it was a sign from God, a Belfast priest called Father Milo performed the service, their minds were made up.

A short time later doctors told them Milo wasn’t reacting to the treatment and there was nothing more they could do for him.  Karen and Sean stayed by his side through the night.

When morning came Dr Sweet started his shift and vowed to do all he could.

Treatments were adjusted and the couple were told to take short period of respite with the assurance that the baby would be kept alive if anything went wrong.

Around 20 minutes later they were greeted with words they longed to hear, ‘good news’.

Milo was stable, he was off adrenaline and steroids, and his ventilation had been changed.

However, a life-saving surgery was still needed to close the hole in his diaphragm during which he lost a lot of blood and required a transfusion.

It was discovered that all of his organs except his liver had moved into the chest cavity, if the liver had then Milo would’ve died.

He kept fighting post-surgery and showed signs of improvement. 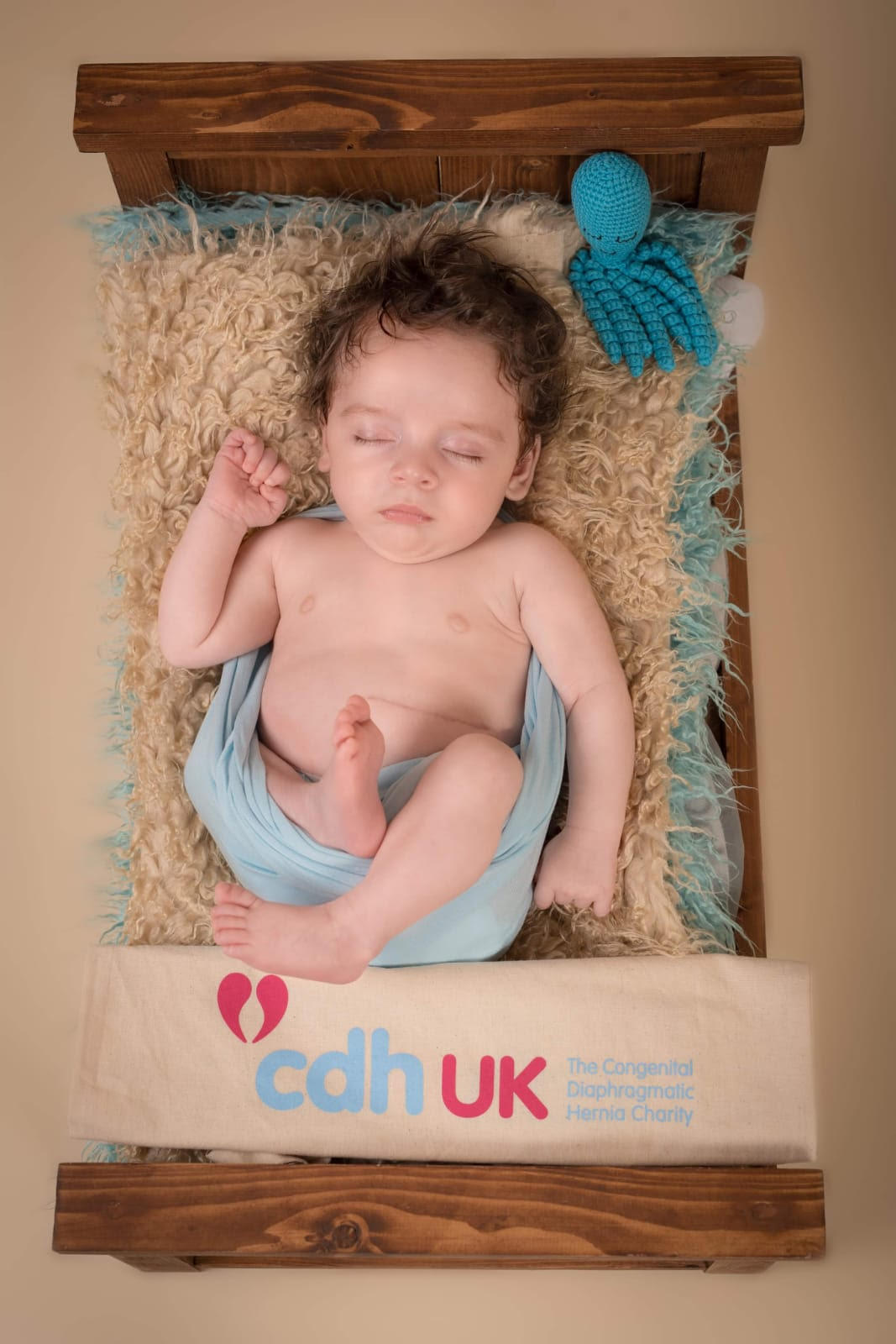 Peace of mind was restored on that fateful day.

To the astonishment, and delight of his parents, Milo was discharged from hospital at age 3 and a half weeks.

A setback came ten days later when he was readmitted to the Royal Victoria Hospital with a potentially fatal bowel obstruction where he spent a further two weeks.

Back home in Derry Milo remained susceptible to infection and has been in and out of Altnagelvin with bronchitis.

It has not been plain sailing but they have watched their baby make gradual improvements and are filled with hope about the future.

Doctors have been stunned at his level of progression.

The charity CDH UK has also been a great support to the family throughout.

The emergence of Coronavirus means that Milo has to be isolated and protected at home but thankfully there are no concerns at the moment.

May 20 was the pinnacle of a tough year, a beautiful moment for all the family as Milo reached his first birthday, a milestone that seemed unreachable just twelve months ago.

“This was a massive moment for us,” Sean said, “knowing everything we’ve been through to get there.

“We thought back to the same time last year when he was in intensive care and what he’s overcome - it made it all the more special.” 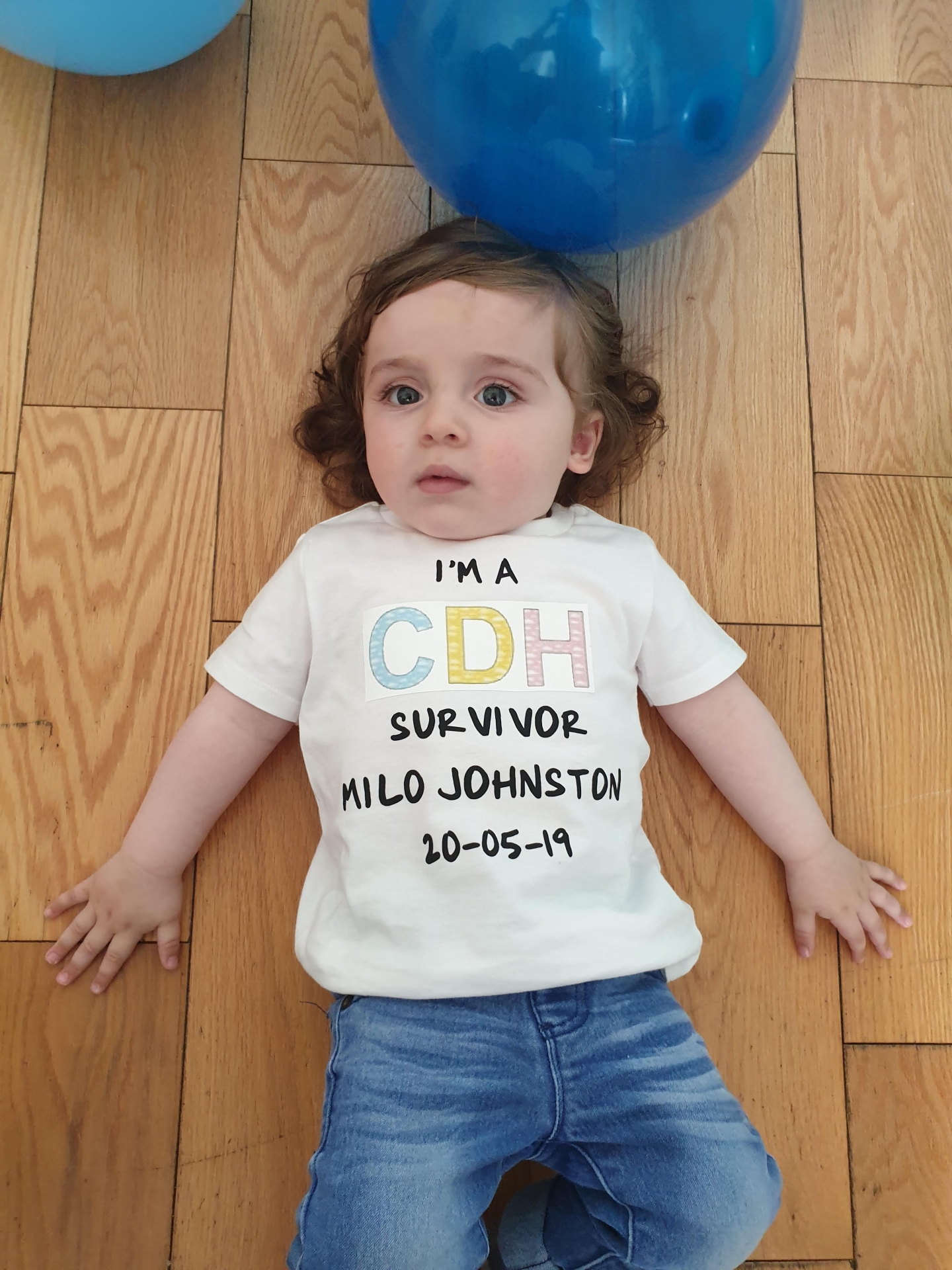