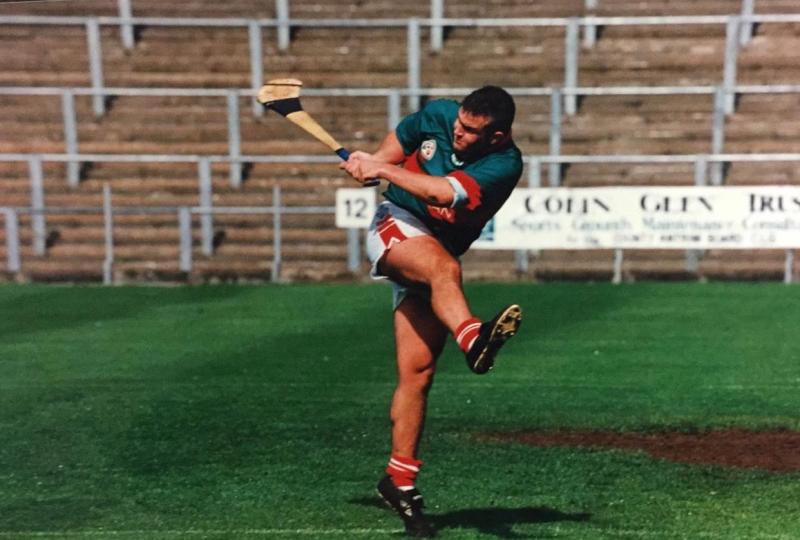 At the turn of the millennium, Derry won the first of their back-to-back Ulster senior hurling titles before running Offaly close in the All-Ireland quarter-final. Kieran Stevenson was man of the match in their win over Antrim and Michael McMullan spoke with the Derry 'keeper, as he rekindled the memories of their golden era.

For 92 years, Derry had wandered around in Ulster's hurling wilderness. Until that moment.

The 2000 Ulster final was ticking towards a conclusion. Mickey Collins won a free which his brother Ollie drove between the posts at the Andersonstown Road end. Derry fans among the 3,000 strong Casement Park attendance exploded into another frenzy, as their caman-wielding heroes hit the front again.

Was this eventually going to be their day? Not just yet. There was time for Antrim to cast the dice one last time.

Gary O'Kane composed himself over a stoppage time sideline cut. The wind carried the sliotar into the danger-zone, where vigilant Derry goalkeeper Kieran Stevenson deflected it wide. It was the last action and the final whistle kick-started an outpouring of emotion for the new Ulster champions.

'Bullfrog' was the 'keeper in Banagher's three-in-a-row winning minor team, before moving into the county scene. An 11-year career began in 1995, as understudy to Lavey's Fergal 'Shorty' McNally. The following year, he was second choice behind Padraig Ó Mianáin when Derry won the All-Ireland 'B' championship.

In 1995, the U21s lost to Antrim (2-17 to 1-4) in the Ulster final. From that team, captain Colin McEldowney, Benny Ward, Mickey Conway, Gary Biggs and Geoffrey McGonigle would help spearhead Derry seniors towards Division One. The minors lost in the final that year, to the Saffrons, by an almost identical margin and Stevenson was the 'keeper on both teams.

In 1997, the U21s took Antrim to a replay and 16 frees from the unerring Dermot Doherty, on his own Emmet Park turf, finished the job as Derry took the title in mid-week extra-time thriller.

“That was a good win,” Stevenson recalls. “Antrim were always the team to beat, in terms of the county.”

Things began to change. They ran Antrim to three points in the 1998 senior final, but lost convincingly the following year.

It was a spell in hurling's top tier that made the wheels of change turn that bit quicker. Promotion at the end of 1999 began a four-year stint in the top flight. They ran Waterford to seven points at Ballinascreen in their first outing, before facing Cork and Kilkenny. The cream of hurling was lifting Derry's standards.

A 20-point slump to Tipperary, in Thurles, was their toughest afternoon. A one-point defeat in Laois was the one that got away, leaving Derry needing to beat Kerry in a relegation play-off to stay afloat before dropping down at end of the 2003 campaign.

“I think it as the Division One hurling that stuck to us and we were on an upward curve,” Stevenson feels. “There were more players added to the panel.

“Derry hurling (before that) was about filling up the numbers and going out to play the matches. Then it changed and everybody was taking it serious. The club scene was improving and you could see the skill level going up from 1995 to 2000.”

In an interview three years ago, Conor Murray painted the Derry hurling scene he played on at the start of the noughties as a family. A unique one, with club rivalry left at the gates of Owenbeg and picked up on the way home. Stevenson agrees.

“No club stuck to themselves, everybody got on well with everybody,” he said.

Other managers weren't chirping in players' ears, telling them not to commit to the 'small ball' game. In the 2000 season, Kieran McKeever threw his lot in with the hurlers, while also playing in an Ulster football final weeks later.

“Players were not restricted in playing for the county, in terms of hurling and everybody gelled,” Stevenson added

A mountain of upside-down kit bags would be erected in the aisle of the team bus, with a coat thrown over it. Hey presto, they had a card table, around which they laughed on their journey to whatever battle they would later brace themselves for. It got more advanced when Stevenson, a kitchen manufacturer by trade, patented a custom-made card table.

“When we were coming home, we were arm-wrestling on it and it was all a bit of craic,” he joked. 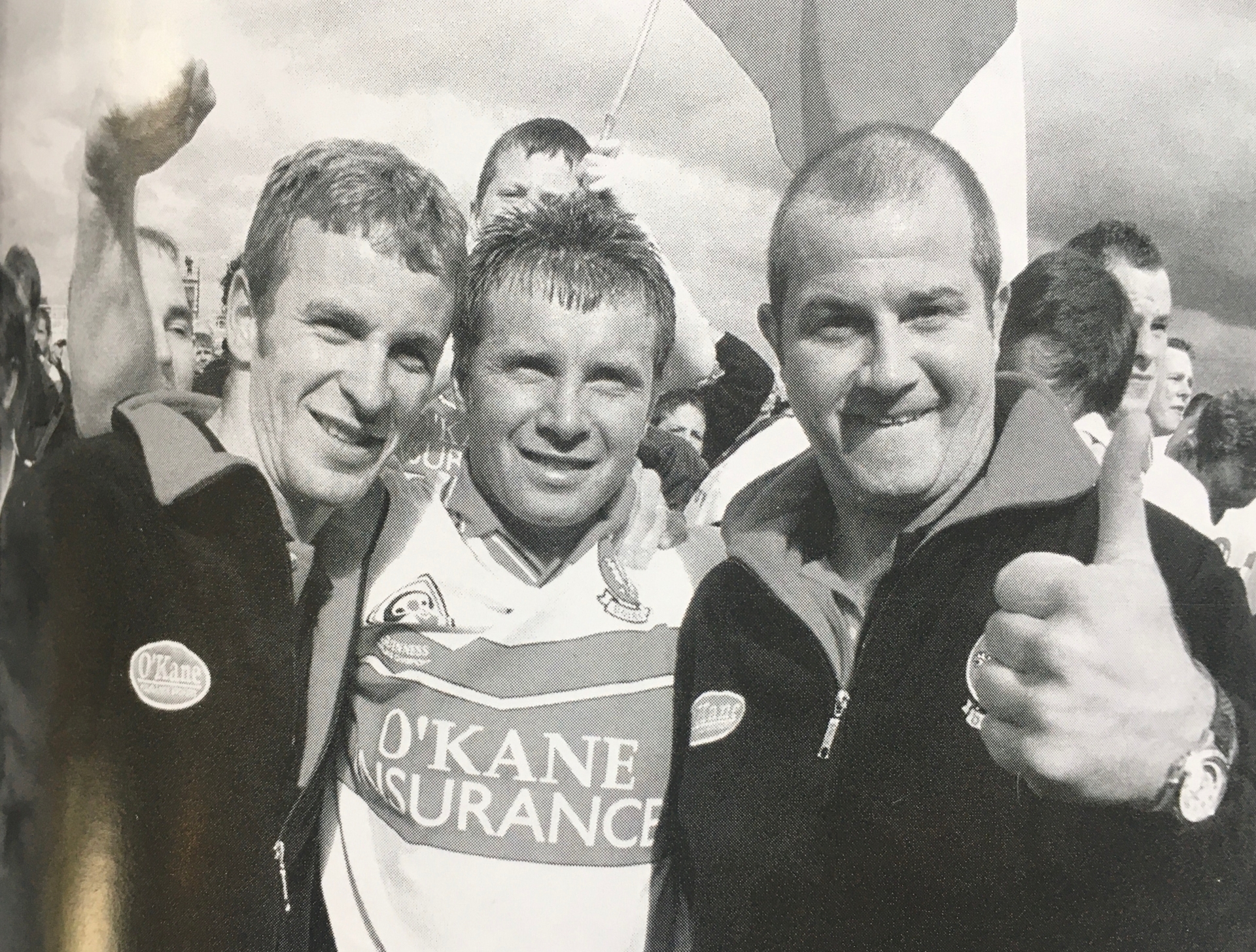 Steering the ship was Cushendall man Kevin McNaughton. After spending time helping foster Swatragh's structures and leading them to back to back intermediate championships, he came on board with Derry at the start of the 1999 season.

Heading up the M2 for the 2000 final, Derry were in a decent place, following a 2-15 to 0-8 win over a Down team who had beaten New York in the quarter-final.

Antrim were 17-point winners over London in their semi-final, but Derry blitzed them in the first half of the decider. Rookie defenders Emmett O'Hara and Declan McKillop were led a merry dance by the Derry attack.

Ace attacker Geoffrey McGonigle and Emmett McKeever were missing through suspension. That told enough of the depth in Derry's squad.

“We were getting better with playing all the better teams. There was plenty of skill, speed and fitness in the team. It was about trying to put it all together...it was a good panel,” Stevenson explained.

McKeever had been suspended after being sent off with Down's Noel Sands in the semi-final, on the advice of a linesman. With high-ranking officials on their July holidays, the appeal – lodged before the end of June – wasn't heard and McKeever would miss the final.

“Beefy (Emmett McKeever) was our best player in defence...he was lethal,” Stevenson said of his captain.

“We wanted to try and win it for him because he was hard done by. He was well-liked and in every match, he'd have put his head in front of the hurl to stop the ball.

“Antrim had Alistair Elliott, Gregory O'Kane was full-forward and Gary O'Kane started at centre half-forward, before going back (to centre-back).”

“We should've been further ahead,” said Stevenson of their 3-4 to 0-5 interval lead. “We had missed a pile of scoring opportunities and we were against the breeze in the second half.

“We knew if the forwards were getting on the ball, they could score goals because they were skilful and quick.”

Derry's backs were to the wall as Antrim notched 11 unanswered points and, with 65 minutes gone, went four points ahead.

Derry replied with points to take the wind out of Antrim's sails. Their case was helped further when John O'Dywer finished to the net for the crucial fourth Oakleafers' goal.

All the press cuttings and programmes were kept too. A raft of memories from the glory years. But the hurl that deflected Gary O'Kane's last minute sideline cut to safety is long gone.

“Some wee Belfast boy stole it,” Stevenson reckons. The Derry squad threw their history-making hurls on the turf to celebrate and within minutes they had vanished.

“When the final was blown, it was more the (release of) pressure, you were always checking the time to see what was left. If the game had went on (any longer) there was less likelihood that we could've won the game.”

Conor Murray accepted the cup in the stand, before taking it down to the pitch for the suspended Emmett McKeever to again hoist it skywards to salute the magical moment.

“We were there on merit,” was Stevenson's assessment of their win.

“We had a good defence and a good forward line. When you take the likes of John O'Dwyer, Geoffrey and Mickey Collins as your front three – you have a good side.

“Conor Murray at full-back was safe, you had Collie (McGurk) and Niall Mullan in the corners.”

Stevenson picked up the man of the match award and added to it with the Ulster hurler of the year accolade the following season when Derry retained their title.

Later that night, the team partied into the wee small hours in Dungiven club. You could barely turn a sweet in your mouth. It was jam packed.

Before that, on the joyous journey home, there was a poignant moment when the players got off the bus to carry the cup over the River Bann in Toome.

“We had talked about it in previous years – the days when we were beaten,” Stevenson remembers. “It was a short walk, the boys were more interested in getting on the bus and heading on home.”

Derry's fallow 92 years was over.