Sporting Stories: Who’d be a referee?

The men in black - universally castigated for their myopia, shunned for poor decision-making, and all too often the painted the perennial pantomime villains. 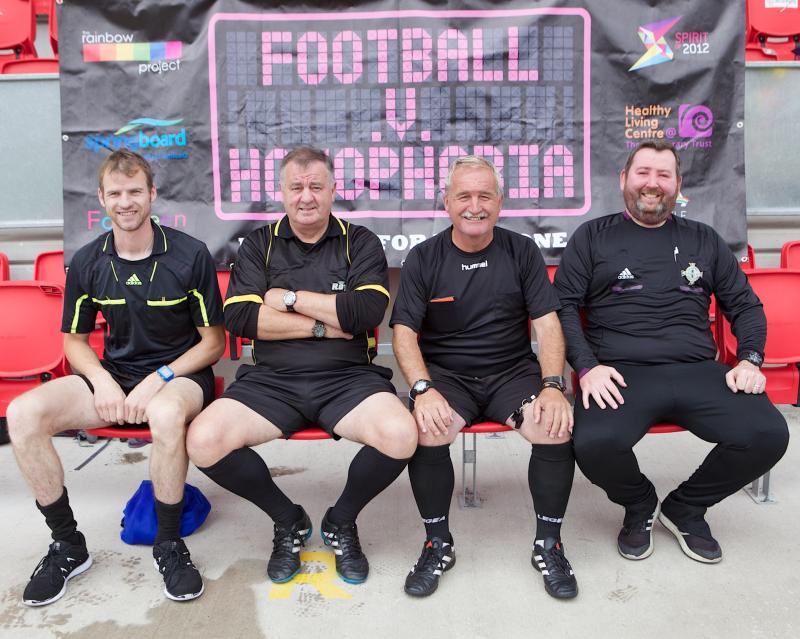 Who'd be a referee? Paul Quigley, Noel Moore, Martin Dunne and Dermot Liddy may be the men to ask.

‘I'd love to wear a rainbow every day,
And tell the world that everything's OK,
But I'll try to carry off a little darkness on my back,
'Till things are brighter, I'm the man In black.’

Who’d be a referee? We’ve all said it at games. And meant it. Surely big Ron Atkinson put it best when he offered: “I never comment on referees and I’m not going to break the habit of a lifetime for that prat.”
The men in black - universally castigated for their myopia, shunned for poor decision-making, and all too often the painted the perennial pantomime villains.
Undeniably society’s last great unprotected minority, perhaps it’s time to redress the balance, to pay tribute to the unloved whistler.
Storm Dennis, Storm Ciara and their exotic cousin Storm Jorge – that unholy Trinity of recent unwelcome weather phenomena, wreaked havoc on the recent sporting scene, and threatened to carpet bomb the entire sporting calendar.
But across this great sports loving city, from Judges Road to Celtic Park our bold referees collectively drew back the curtains on teeth-chatteringly cold weekends. The show must go on, and the much maligned referees were the benevolent ringmasters.

Motivation
Local football referee Dennis O’Connor paints a picture of what would motivate an apparently sane looking man to take up this God-forsaken hobby.
“It’s addictive,” enthuses O’Connor. “When you first start you can’t get enough of it!
“I’ve always enjoyed refereeing Saturday mornings. It’s more local and I enjoy meeting the players. You run into them up the town and you talk about the game, have a laugh. It’s a social thing really.”
Originally from Kent, the love of a local woman brought him to these shores in 1996 where he played for BBOB and Foyle Wanderers.
And like all sportsmen, father time eventually tapped his wicked finger on the shoulder and the time arrived for O’Connor to call it a day.
“I wasn’t enjoying football anymore; you worry about injuries as you get older. And I thought I’ll give refereeing a go.
“The first game I reffed was a DuPont game and I loved it straight away,” says the Englishman with a straight face.
“I don’t know what it is but I’ve always loved the Saturday Morning League. You really look forward to the weekend.”
Boasting six different referee kits these days, the modern refereeing wardrobe is as colourful as some of the language O’Connor would endure at a Tamnaherin Celtic match.
While watching games on television is very much a bus man’s holiday for the affable 55 year old whistler. “You’re watching the referee all the time; you’re even watching the linesman. I find myself calling ‘Offside!’ during games like a lunatic.”

Preference
Greysteel man Sean Curran officiates all codes in GAA and soccer, but has a strong preference. “I love Gaelic games,” he states. “I find the soccer to be a bit boring to be honest. Underage soccer is better because of the level of skill these days, it’s a joy to referee. But definitely Gaelic Games is my first choice.”
Do referees need a thick skin? “Very! You have to be a certain type of person. You have to be strong mentally. You have to be able to deflect all the flack you can get.” 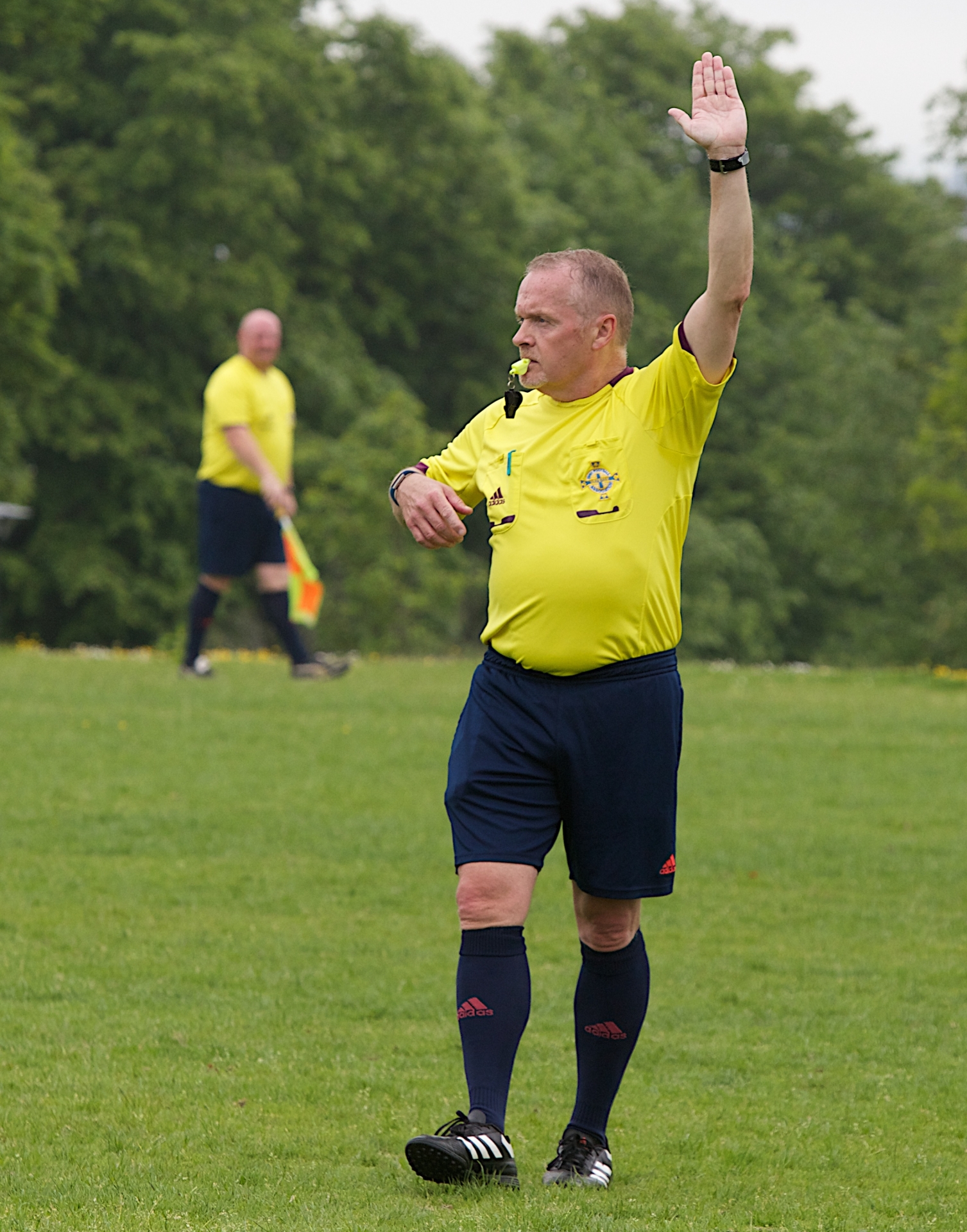 The 58 year old shares Dennis O’Connor’s passion for the officiating trade. “I love it,” he says. “It’s a passion I have. I started out just doing it for my club but then I wanted to do bigger and bigger games. And I wanted to improve my own standards. I’ve refereed over 3000 matches now and I’ve enjoyed every one of them.”
Hurling referee Mark O’Neill agrees with Curran that a hide like a rhinosaurus is crucial to succeed in the refereeing game.
“100%!” he laughs. “Look, I gave it to referees all my life. I argued with referees over most decisions, and I suppose this is now karma coming back at me. As a referee you have to take the higher ground. In the first five seconds after an incident you have to give the player a bit of time to digest a decision he or she may strongly agree with.
“In GAA you can move the ball on 13 metres. You don’t have that in soccer. I find that really helps in GAA, as it turns it back on the player where their team-mates turn on them if the ball is moved forward.
“Rugby has the same idea,” he continues, “but the respect rugby referees get is amazing. There’s nothing worse than slabbering, and the sin bin (in rugby and now in Gaelic football) gives the person ten minutes to simmer down.”

Contrasting
Rugby referee Glenda Mellon cuts a very much contrasting figure on a Saturday afternoon. “I started 4 years ago after I stopped playing and coaching,” she explains. “It gave me a way of being involved in the sport I love without the bruises and pain on a Monday morning.”
Finishing up her own stellar rugby career, Waterside woman faced the same dilemma as many of her refereeing compatriots. What next? 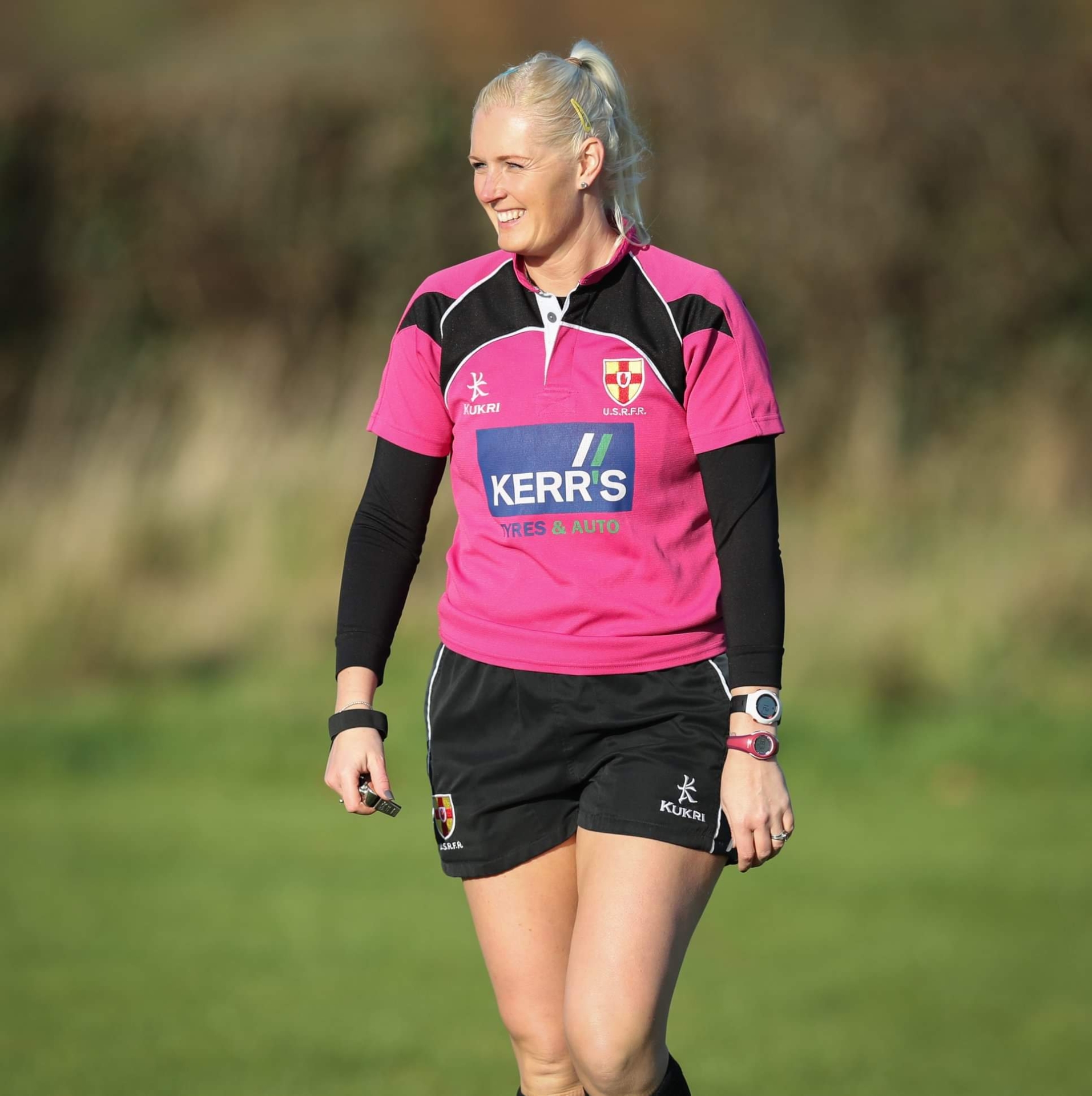 “I really enjoy it as it gives me something to train for,” says the youthful 35 year old. “It's also competitive if you want it to be. You want to improve your assessment scores and get moved up the levels to get better games.”
But refereeing can prove to be a difficult balancing act too for the family woman. “The worst thing is the mummy/wife guilt of being away all day Saturday.
“I enjoy the games most when the players have a bit of banter with me,” she continues.
“But it's usually quite funny when players forget who's reffing and call me ‘Sir’ during a game, and then get very embarrassed when they realise what they have said.”
‘Fail to prepare, prepare to fail’ quoth the great Roy Keane, but he probably hadn’t anticipating this answer from Glenda Mellon on how she readies herself for a rugby match.
“Fake tan, eyelashes and French plaits!” she chortles. Fair to say not the typical response you would hear from a referee, but a welcome addition in life’s rich tapestry. 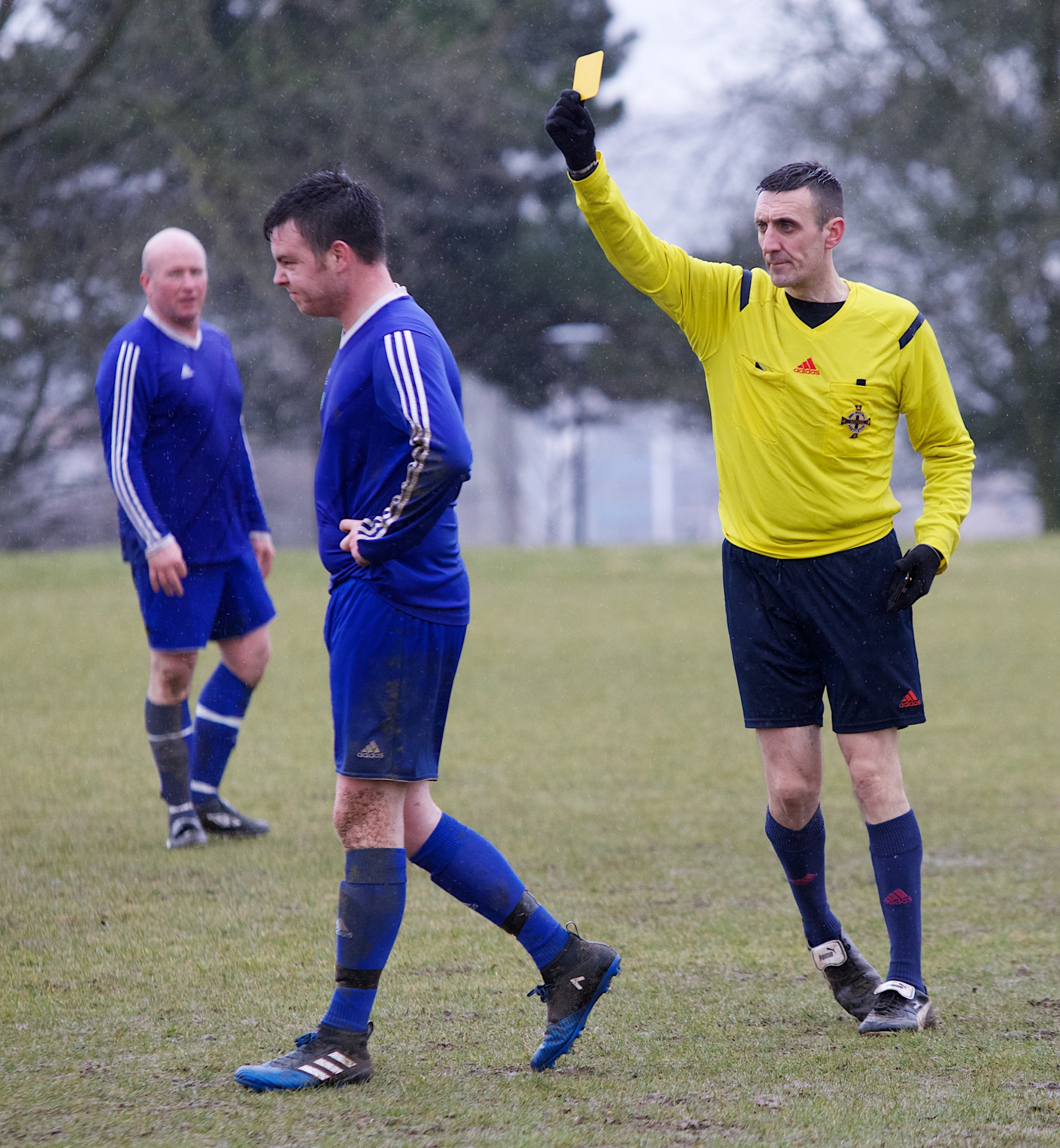 As a potential hobby refereeing might appear as soul destroying as checking your bank balance after a big weekend. Apart from all the grief you endure from players and spectators alike, there’s not much glamour in changing your clothes in a small cattle shed, or in the back of a lorry container in Donemana – where a shower with warm water a dim and distant prospect.
A sunken soggy pitch at Leafair, or a bracingly cold morning at Lisnagelvin where the wind would blow a traveller off his cousin – only the lion-hearted need apply to the reffing trade.
It’s not for everyone. But to the small minority who take up the whistle, and remember we couldn’t play or watch sport without them, referees are an integral part of the game and we should salute them. And just like footballers, hurlers and rugby players across the country, the misery of a poor game can follow them around like a mangy dog.
Playing the game tends to be a selfish act. ‘Love’, ‘passion’, ‘give something back’. These are the collective themes that knit together and resonate when you speak to referees about their motivations.
Somebody once said being a rare boy is not a crime. Well neither is being a referee. 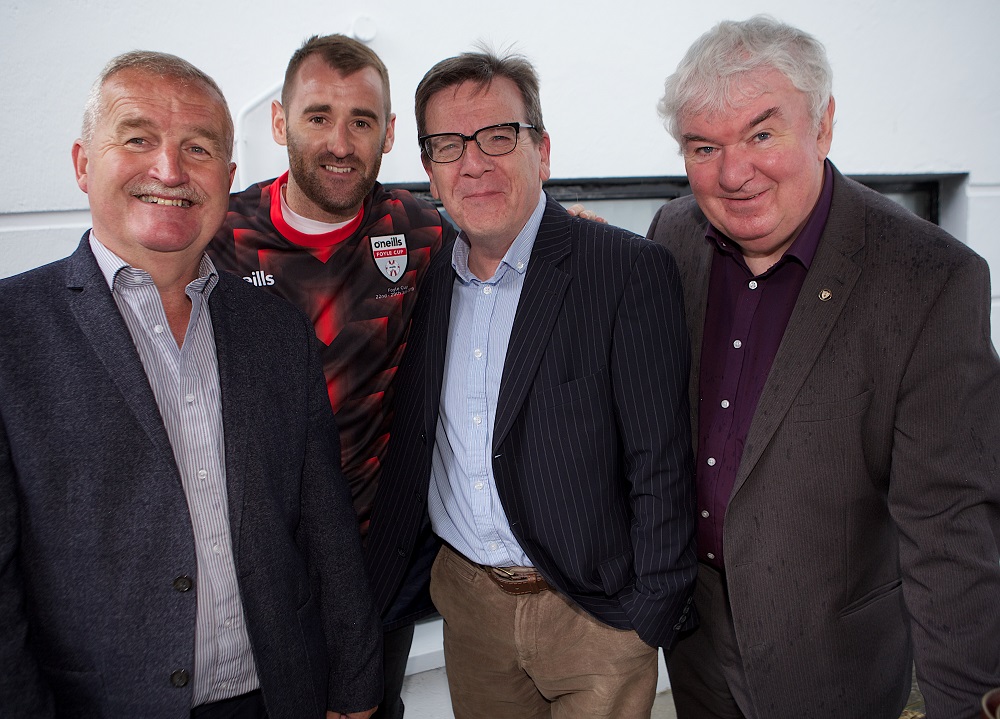