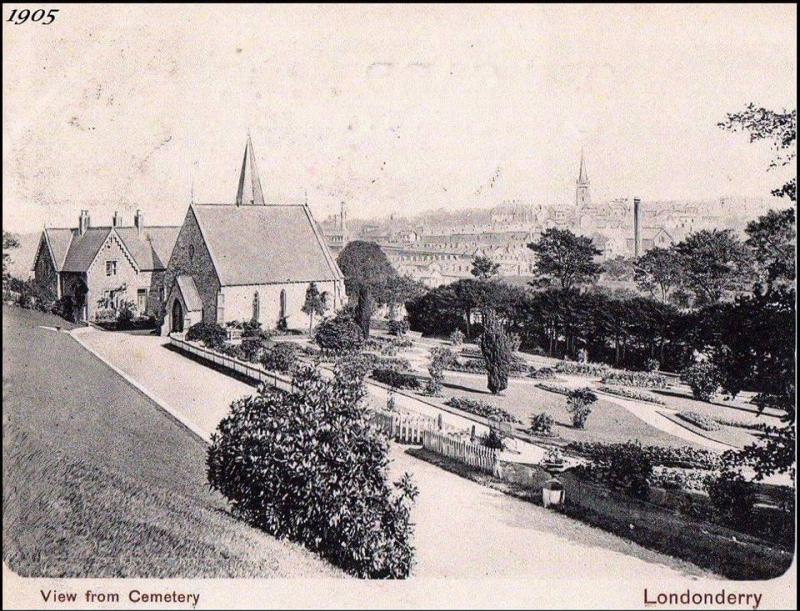 By the middle of the nineteenth century it was becoming clear to the clergy and the city fathers that the graveyards attached to Derry’s churches were reaching their capacity.

At the beginning of 1867, the cemeteries attached to Long Tower, St Columb’s Cathedral and St Augustine’s were closed to new burials and even for those families with rights to graves at those sites were restricted.

The City Cemetery was opened some 14 years earlier in 1853 and would eventually become the main burial ground of the people of the city. Today, in excess of 75,000 people lie at rest on that hill in Creggan overlooking Derry.

The first recorded burial that took place at the City Cemetery was that of 10-month-old child Robert McClelland from Orchard Street who died on December 10, 1853. The first adult buried there on January 12, 1854 was Joseph Bigger.

Mr Bigger’s grandson David would later become Superintendent of the City Cemetery and actually lived in the Gatelodge which is still there on the Lone Moor Road entrance.

Today's article is a general overview of the history of our local burial site before taking a closer look at some of the more specific themes and the personalities.

There are three historical eras reflected in the cemetery’s headstones and monuments-Victorian, Edwardian and later twentieth century.

In the Victorian era the style of headstones and monuments often reflected the status the individual buried there. Many highly ornamental and expensive graves are there throughout the middle and bottom parts of the site.

The Victorian era often included urns, obelisks, broken columns and angels on burial plots and was known as the neo-classical style because it was influenced by Greek and Roman art. Many of the smaller headstones in the nineteenth century also included symbols such as wreaths that depicted eternal life, clasped hands-a symbol of a final farewell or IHS, the first three letters of the spelling of Jesus in Latin form.

A broken column symbolised a young life cut short, the loss of the head of a family or the end of a family line.

Anchors were another popular grave stone symbol that represented hope, confidence and safety. The use of the symbol dated back to the early Christian period when it was used to denote a disguised cross and a marker to guide the way to secret meeting places. And, an anchor tangled in rope symbolised death.

The obelisk is an Egyptian symbol of eternal life, resurrection and regeneration and features heavily over some graves in the older section of the City Cemetery.

The use of Celtic crosses as headstones dates back to the Gaelic revival at the end of the 1800s and that took their inspiration from those used in Irish monasteries in the 8th and 9th centuries. Three types of these crosses were used. The first were plain crosses with very little decoration, the second type were ornamental with surfaces covered by an interlace design and spirals and the third were described as scriptural and carried figures representing elements from the old and new testaments.

However, after the death of Queen Victoria in 1901 a new attitude towards spending large amounts of money on headstones developed amongst the public.

This new style in headstones and monuments was greatly increased by the slaughter of WWI when it now appeared distasteful to display extravagance after such needless loss of life.

The Edwardian era therefore became characterised by smaller, less lavish funerary architecture as it was called and this style prevailed until the 1950s, a few years after the end of the Second World War.

As the twentieth century progressed headstones were increasingly regulated to specific sizes. The stone surrounds often seen on the older style of graves disappeared to allow the development of new sections of lawn. More modern decorations now included an open Bible with a chosen inscription, angels depicting the Resurrection of Christ at Easter that implied hope. Other popular imagery included the Dove of Peace, particularly popular in the where St Columbcille founded an ecclesiastical settlement, and the rose as a sign of love.

Many cemeteries of course share a range of common features and Derry City Cemetery is different in that respect. However, it is the wide ranging diversity of the people buried there that makes the cemetery such a unique record of the history of not just the city but the whole region.

The Derry of today is the result of its growth in the Victorian era as a result of distilling, textiles and agriculture. However, it was the city's port which made it an ideal hub for commerce and trade. Coupled to that the rise of shipbuilding and emigration was closely related to the development of the North West's railway system. The older section of Derry City Cemetery contains many references to these trades through the personalities who were at the forefront of their foundation.

Derry and its citizenry have also played a prominent role in international conflict. Many men from Derry and the North West served in campaigns around the globe. Since WWI the Commonwealth War Graves Commission (CWGC) has been responsible for burying those who fought for Britain.

GWGC records show that Derry City Cemetery has almost 200 such burials-95 from WWI and 99 from WWII. The Cross of Sacrifice is located near to the entrance of the cemetery. It was designed by Sir Reginald Bloomfield and is located in every cemetery with a significant number of war dead.

Like all large urban cemeteries, Derry's main burial there are number of unmarked graves and plots. The poor of the city are remembered by the 'Celtic Cross of St Columba to the Forgotten Dead of Derry' which was erected in 1993. And, on February 20, 2011 a monument in memory of all the stillborn babies buried in unmarked graves was unveiled.

Altogether, there are five unmarked sections in which those deemed as paupers are buried. There are three sections for Catholics and two for Protestants. There are estimated 7,500 adults stillborn infants buried in these plots.

Although the cemetery was founded in the mid 1800s it contains the remains of from the 17th century Siege of Derry unearthed in archaeological digs in the 1970s and 1980s.

The cemetery also bears witness to the 'Troubles' that began in in 1968, but another era of heightened tensions ran from the Home Rule Crisis of the late nineteenth century until the partition of the island in 1921.

The early 20s saw an eruption of violence in the city and that pattern was sporadically repeated until the outbreak of serious unrest 50 years later. It has been well documented that  as tensions rose and divisions between both communities, Protestant people living on the western side of the River Foyle moved to the Waterside en masse. As a result of this fewer and fewer people from that community chose to be buried in the City Cemetery.

In the 166 years since it opened the City Cemetery has also become a haven for wildlife with its grassland, scattered trees, hedgerows and walls.

The Peregrine Falcon has been spotted zooming over the cemetery down the years hunting for food. The plentiful supply of rabbits, the Irish Hare and squirrels in the cemetery make it a fruitful foraging ground for birds of prey.

Derry's City Cemetery is the seat of hundreds of tales that compose the modern history of the city and region. It tells of achievement and of tragedy, of traditions, beliefs and conflict. More importantly it is a microcosm of a shared humanity that may teach us valuable lessons for the future from our past.

CAPTION: A view of Derry City Cemetery circa 1905.
ADVERTISEMENT - CONTINUE READING BELOW