Derry City Cemetery Series: The soldier from the Fountain who saved a group of 1916 rebels 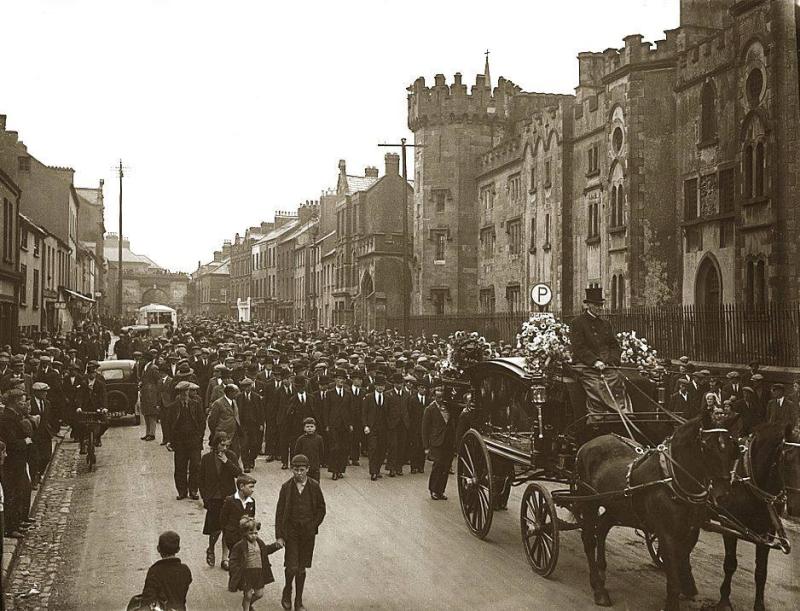 William 'Billy' McGahey was Sergeant Major in the Inniskilling Fusiliers, a member of the UVF, the Orange Order, the Freemasons and when partition kicked in was a training instructor for the local B Specials.

From his birth in 1877 until his death at the age of 55 he remained a staunch Protestant steeped in loyalism and strongly identified with British traditions and identity.

However, the son of the Fountain area is credited with saving the lives of a group of Irish Volunteers in the aftermath of the Easter Rising in 1916.

Billy McGahey was educated at the Cathedral Schools in London Street and for twelve years he represented the East Ward of the city as a Unionist Alderman on the city's Corporation and founded a billposting business as well.

Mr McGahey was also one of Derry's senior magistrates having been called to that position in 1912.

A member of the Foyle Defenders Loyal Orange 1495 McGahey was also a Freemason attached to the St Clair 362 Lodge in Glasgow. He was also a keen debater and a member of St Columb's Cathedral select vestry.

The serviceman was also noted as a string force in the foundation of Derry City FC and was a founder member of the now long gone Corinthians FC in the city and was their trainer in the season when they one the Irish Junior Cup as well as every local trophy on offer.

Billy McGahey also showed strong prowess as a football player and was a senior player for local clubs such as Hibernian. He won an Irish Cup runners-up medal for Derry Celtic in 1910 when played at left-half in a final defeat to Linfield.

As a soldier he was rose to the rank of Company Sergeant Major in the 12th Battalion of the Inniskilling Fusiliers. This was a reserve battalion formed in April, 1915 formed at Enniskillen from companies of the 9th, 10th and 11th battalions.

In June 1915 the 12th Battalion was moved first to Ballyshannon, then Newtonards and back to Enniskillen again as part of the 15th Reserve Brigade.

In 1916 the 12th Battalion were sent back to Finner Camp between Ballyshannon and Bundoran. This Battalion never saw action in the First World War, but instead saw it on a battlefield much closer to home.

The Easter Rising of 1916 began on Monday, April 24. And by the time the week long fighting had ceased both Billy McGahey and the 12th Battalion of the Inniskilling Fusiliers had been in the thick of it.

When the rebellion had been defeated, the commanding officer of the 12th Battalion, Sir John Leslie addressed the troops involved in the fighting and commended them for their bravery.

During this address, Sgt Major McGahey was brought to the front and congratulated by Sir John Leslie for the example he had shown by rallying his men time and again while under heavy fire from republicans. In response McGahey said he had only done his duty.

What was however most certainly unknown to Sir John Leslie was an additional part of Billy McGahey's experience of 1916 in Dublin.

Some years after the Easter Rising a journalist from Derry was on holiday in Dublin and attended a social function at the Mansion House.

When one of those in attendance heard that a group from Derry was present they asked if anyone knew a Sergeant Major McGahey.

It then emerged how the Dubliner who asked the question had come to have known the man from the Fountain. He had been a member of a band of Irish Volunteers who during the fighting in 1916 had occupied buildings on the eastern side of O'Connell Street.

Following the surrender of the republican forces they had tunneled their way through the walls of houses in Talbot Street and taken shelter in a church vault in the hope they could escape after the British searches had ended.

But, the rebels were discovered and captured by soldiers under the control of Billy McGahey who was ordered to take them to the grounds of the Custom House.

As the captive rebels were later led across Eden Quay another group of soldiers threatened to shoot them. Again, McGahey stepped in and said no harm would befall the republicans while they were under his charge.

The man who asked if the Derry journalist knew Sergeant-Major McGahey was convinced that the staunch loyalist from the Fountain had saved his and his comrades lives.

William McGahey died at his home at 43 Fountain Street on August 16, 1933. It was reported that his funeral three days later was one of the largest seen in Derry in many years. Mourners who followed the cortege to Derry City Cemetery contained representatives from all classes and creeds.

Mary McGahey, William's wife, was also a native of Derry. She served the medical profession in the city for more than forty years as a State Registered Midwife. She passed away following a period of illness in May, 1961 at the then recently opened Altnagelvin Hospital. She was 84-years-old.

William and Mary's son also called William also attained the rank of Sergeant and had joined up at the age of 16 and fought in WWI. He again volunteered in September 1939 at the outbreak of WWII and served throughout the conflict with the North Irish Horse in campaigns in North Africa and Italy. He was mentioned in Despatches for his service in the field.