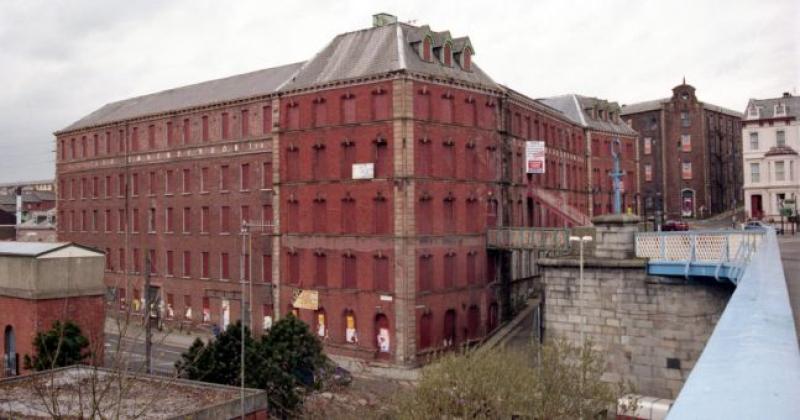 Born in Scotland in 1824, William Tillie was by trade a shirt collar manufacturer in Glasgow. But, a vision of bigger industrial projects saw him arrive in Derry in 1850.

In the following year of 1851, Tillie and his business partner John Henderson established the first shirt factory in the city.

While William Scott is rightly considered to be the founding father of the shirt industry in Derry, it was William Tillie who moved the trade to a much higher business level.

This came from the fact that it was Tillie who first realised the potential of bringing workers together under one roof in a 'one stop shop' for shirt manufacturing as opposed to the outsourced method or 'piece work' method that had existed up until that point.

Since 1845, around 600 women had been employed in their own homes working on different parts of shirts that were distributed by English agents via local managers.

In the memory of most people in Derry, Tillie & Henderson's factory will forever be associated with the huge five story building that existed at Foyle Road. But, in 1851 the manufacturer's first premise opened at the corner of Sackville Street and Little James' Street.

It was almost six years later on December 30, 1856 at a cost of £4,000 that the more famous building opened its doors and was regarded as the biggest shirt factory in the world.

The factory covered over an acre of land and had 19,000 square feet of factory space.

The firm had wholesale warehouses in commercial capitals of London and Glasgow and export markets in Australia, South Africa, North and South America as well as the West Indies and all other far flung corners of the British Empire.

Commercial success at the factory was due largely to the realisation that technological advances in industry were becoming more available.

The investment in new machinery, including the sewing machine itself, coupled with Tillie's own innovations ensured that the firm stayed ahead of the chasing pack of businessmen becoming zoned in on the shirt industry.

Tillie harnessed the new fangled sewing machines in his factory to a steam engine and patented his own invention-the clamping guide-which allowed a single worker to operate several machines at once.

Meanwhile, at the City Factory in Queen Street the owners oversaw the development of the steam powered band-cutting knife which replaced scissors and allowed the cutting of up to 100 pieces of cloth at one time.

By the dawn of the twentieth century Derry had almost 30 shirt factories producing half-a-million garments a year between them.

Fifty years earlier in 1850 part of William Tillie's fact-finding mission to Derry was bringing a large batch of shirts to have them finished and therefore assess the quality of the work being produced here.

Previous trips here had established that the dexterity and skill of the local and predominantly female labour force. So, whilst he was well aware that the finish provided in Derry was of a very high-standard he concluded that the system of outsourcing the work was not as cost effective as it could have been.

This conclusion led William Tillie to approach a friend and fellow Glasweigan shirt manufacturer John Henderson about the viability of opening a factory in Derry.

Both Scots were impressed by what they saw in the city and went ahead with their plans.

Initially, the Foyle Road factory operated with around 450 workers and by 1864 the workforce had risen to 850. Machine workers earned between five shillings and eight shillings a week.

With industrialisation of course came increasing disputes between management and workers. The company for example fined bad timekeepers, but the money was saved and used for 'medical relief' and paid for doctor's bills and for the purchase of fortified wines and meat for workers who suffered from ill health.

But, a more serious dispute arise in 1890 when a Mrs Aveling of the Gas Workers and General Labourers Union accused Tillies & Henderson and other large factories in the city of imposing fines on workers who laughed or looked out of the the windows. However, the companies were cleared of the charges.

Mrs Aveling was in fact, Eleanor Marx Aveling, the daughter of Karl Marx and Tillie & Henderson's operation was sufficiently large to merit a mention in his 1867 work Das Kapital.

Inspired by a walkout by London match girls in 1888, some of the Derry factory girls – with the support of Marx’s daughter, the activist Eleanor Marx Aveling – asked to join the Derry Trades Council.

In 1891 they were admitted, as Derry’s fifth branch of the Gasworkers’ Union.

In a visit that same year, Marx Aveling told the factory workers that “Derry stands higher in regard to the treatment of workers than most of the towns I have been to.”

Despite the assessments of Eleanor Marx, further episodes of adverse industrial relations continue to happen.

In the early 1860s when it transpired that shirts were being stolen from the factory and sold to Derry's pawnbrokers. New garments priced between two shillings and sixpence and three shillings were being offloaded for nine old pence.

In May of 1857, Tillie & Henderson attempted to prosecute an employee over this practice but the case was dismissed because they couldn't make the case stick within the allotted timeframe of four months.

Half-a-century later in 1907 another bitter industrial dispute hit the factory and reflected poorly on the owners. A decision was taken to retire a manager from his job against his wishes. A strike began but did not result in the reinstatement of the man.

This was quickly followed by a decision to cut the pay rate of machine workers by two-pence in every shilling without explanation that caused a furious reaction amongst the women workers. Neither was any opportunity to discuss the wage cut was provided by the company.

The situation got worse when management decreed that anyone who didn't like the wage cut could leave the factory immediately. Thirty-six of the machinists refused to accept the announcement and went on a strike that lasted a month. To add insult to injury the factory bosses went to the local press almost immediately and advertised the striking workers jobs.

In the summer of 1911 Tillie & Henderson however experienced a slice of good fortune. A drought meant that water, necessary to maintain continuous production, was in short supply.

The laundry departments almost ground to a halt and the factory was forced to short-time work. By August, the situation was threatening all production at the Foyle Road site when a well was located beneath the factory containing enough water to keep production ticking over.

Other factories followed suit and searched for underground wells. The employment of a water-diviner by Hogg & Mitchell yielded a well 50 feet beneath the factory at Great James' Street.

At Tille & Henderson's the shirt-cutting department was on the first floor, where six steam-powered cutting machines operated. This was the floor from where putting out the work for the factory's rural outposts took place.

The second-floor was crammed with row upon row of sewing machines-again originally driven by steam. On the third-floor 500 workers were more machines whose operatives turned out collars, fronts and cuffs. The top floor was the cutting. machining and examining department for ladies underclothing.

The Great War of 1914-18 of course provided a boost to the shirt manufacturing industry with the female population putting their shoulders to the industrial wheel even more than before as the male population left to fight. And, this situation was replicated from the late 1930s as the spectre of global conflict loomed once again. It was in this era that Tillie & Henderson's output reached it's peak as contracts to supply all branches of the British forces had to be fulfilled.

Time stands still for no one of course and by the 1970s the advances in technology meant that the imposing structure on Foyle Road had become antiquated in terms of its usefulness to a more streamlined means of production and reduced workforce.

Also, the reputation of Derry as the main producer of high quality shirts began to decline because it could no longer compete with the cheaper garments being produced en masse in other global marketplaces.

The company moved to new premises at Maydown on the outskirts of Derry signalling the beginning of the end for the Foyle Road building that had stood there for over 100 years. In the mid 1980s, Tillie & Henderson's ceased production completely.

The factory had provided employment in the city for over 135 years. Like all major companies it had its share of disputable working practices, but in a city traditionally deprived of work it put food in many mouths and was witness to many historic events as well as contributing to them.

To put it context, when Tillie and Henderson's stopped producing shirts, William Tillie had already been dead for around 80 years. It was he who had made Derry his home while his partner John Henderson largely remained in his native Scotland.

William Tillie died in Derry on March 8, 1904 aged 80 and lies buried in Derry City Cemetery with his wife Agnes, who had died four years before him September 1900.