Derry City Cemetery Series: The best hymn writer in the English language lies buried on a 'green hill' in Derry 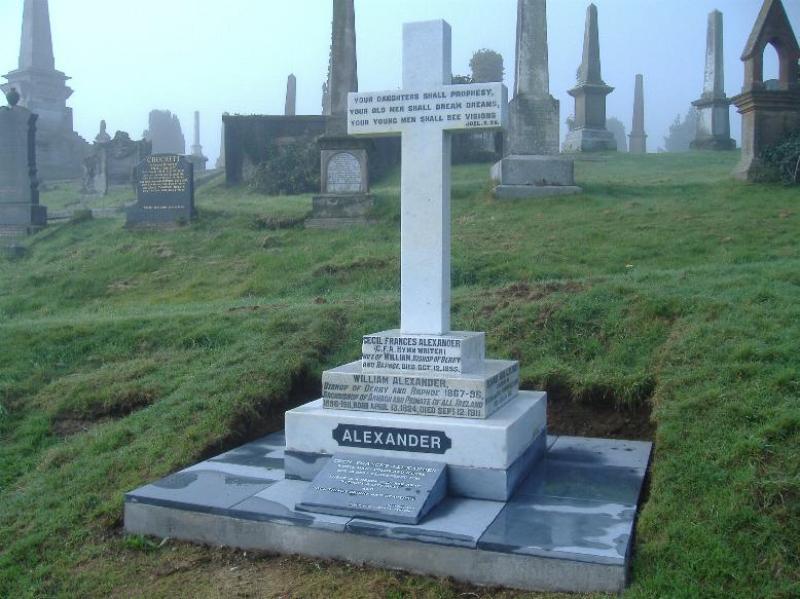 Anyone who has ever set foot in an Irish church will without doubt at some point has either sang or listened to the hymns 'All Things Bright and Beautiful', 'There Is a Green Hill Far Away' and 'Once in Royal David's City.'

But, how many realise that these were written by a woman that lies buried in Derry City Cemetery?

Mrs Cecil Frances Alexander was born at 25 Eccles Street, Dublin in April 1818. She was the third child of Major John Humphrey's of Norfolk and Elizabeth (nee Reed). Major Humphrey's was land agent to the Fourth Earl of Wicklow and also to the Second Marquess of Abercorn.

Cecil Frances love of writing verse began in childhood and some of her inspiration came from a Dr Walter Hook, Dean of Chichester Cathedral. Her father encouraged her writing from a very young age and as a result she began a career as a prolific writer of hymns. By the time of her death at the age of 77 she had penned over 400 such works.

In 1850, Cecil Frances Humprhey's married clergyman William Alexander in Strabane. He was later to become the Church of Ireland Bishop of Derry and Raphoe and the Primate of All Ireland.

Bishop Alexander also wrote several books of poetry, the best known of which was St Augustine's Holiday and Other Poems. The fact that Cecil Frances was six years older than her husband is said to have been a cause for concern within his family.

Mrs Alexander's later religious work was strongly influenced by her contact with the Oxford Movement and particularly John Keeble who edited her most famous anthology-'Hymns for Little Children.' In fact that work had reached it's 69th edition by the close of the 19th century.

By the 1840s, Cecil Frances Alexander had already become famed as a hymn writer. Her compositions became a steadfast feature of Church of Ireland hymnals and she also contributed lyrical and narrative poems to Dublin University Magazine under various pseudonyms.

The poems continue to be accepted and where included in the 1960 and 1987 editions of the Hymnal nearly a century after her death. A posthumous collection of her work was published by her husband in 1896 entitled 'The Poems of the late Mrs Alexander.'

The poet, Alfred Lord Tennyson once said he would have been proud to have written her work 'The Burial of Moses.'

Perhaps the most famous of Mrs Alexander's hymns is 'There Is a Green Hill Far Away.' Inspired by a small hill outside Derry wall's which in her mind was a hill like the one Jesus was crucified on. The reason behind the work was to help her godchildren understand the Creed and was composed while she sat beside the bed of a sick child. Several composers have written tunes for the hymn and it has been pronounced the greatest hymn in the English language because of its simplicity.

One story connected with the hymn is that during the First World War a doctor was in his surgery with patients. As he listened to their anxieties he heard  singing coming from a room upstairs and realised it was his wife singing 'There Is a Green Hill Far Away' and told his patients that if we all believed the truth in the song we would all be less worried.

Mrs Alexander was a involved in charitable work for most of her life and she was involved with sting up the Derry Home for Fallen Women and worked on the development of a district nursing service.

Her classic 'There Is a Green Hill Far Away' has obviously endured the test of time but few realise the part that it has played in transforming the education of deaf children almost 200 years ago in the north of Ireland.

Cecil Frances Alexander and her sister Anne were heavily involved in local church activities in Strabane including their visits to local families.

On one of the visits they met a young deaf boy from a poor home in the area. They were greatly concerned about the loneliness of his existence and the fact he was alienated from learning, especially about Christian way of life.

Both Cecil and Anne persuaded their father to allow them to use a small out building in the grounds of his home-Milltown House so they could establish a school for deaf children.

It was a passion that would Cecil Frances would continue for the rest of her life and she dreamt of establishing a much larger institution of this kind.

The proceeds from 'Hymns for Little Children' made a hefty contribution to to what became known as the Derry and Raphoe Diocesan Institution for the Education of the Deaf and Dumb. Cecil Frances' 'dream' became reality in September 1850 when just a few weeks before she married William the foundation stone of the school was laid.

Despite the onset of the Famine in the 1840s education for deaf children in Ireland flourished and other schools of this nature opened up in Belfast, Dublin and Cork. Frances' school first opened its doors in the summer of 1851.

In the following five years the school took in almost 50 children teaching skills that would help them succeed in a hearing world.

William and Cecil Frances settled happily into life in Strabane and began raising two of their three children in the Co Tyrone town.

But on the night of May 7, 1856 whilst the 18 pupils of the school were asleep in its dormitories a fire broke out in the kitchen and quickly spread throughout the building.

Reports from the time say there was confusion about being able to find the keys top unlock the dormitory doors. The dorms had high windows beyond the reach of small children.

Despite the frantic efforts of local people to break the glass and gain entry to rescue the children, six of them died. The oldest was 15-years-old and the youngest just eight.

It took eight hours to extinguish the fire completely.

Cecil Frances and William were understandably devastated at the deaths of the children and set about a fundraising effort to establish a temporary school for deaf children open with a view to permanently re-establishing another institution. Sadly, it never materialised.

The overall effect on Cecil Frances Alexander was such that any trace of light-heartedness left her for good, but she remains remembered as a pioneer of deaf education in Ireland particularly in the North West region.

Cecil Frances Alexander died on October 12, 1985 and was laid to rest in Derry City Cemetery. Rev Dr William Alexander, who had been born in Devon on April 13,1824 in Devon passed away aged 87 on September 12, 1911 and was buried with his wife.

In 1913, two years after William Alexander's death, a stained glass window by James Powell in memory of Cecil Frances was installed at the northern vestibule of St Columb's Cathedral in Derry financed by public donations.

The three lights of the window refer to three of her hymns-'Once in Royal Davids City', 'There Is a Green Hill Far Away' and 'The Golden Gates Are Lifted Up'. Mrs Alexander is also commemorated by an Ulster History Circle blue plaque on Derry's Bishop Street.

One of her most famous quotes remains: "Do no sinful action, speak no angry word; ye belong to Jesus, children of the Lord."