Keith Buchanan is just 15 votes short of the quota in Mid Ulster. 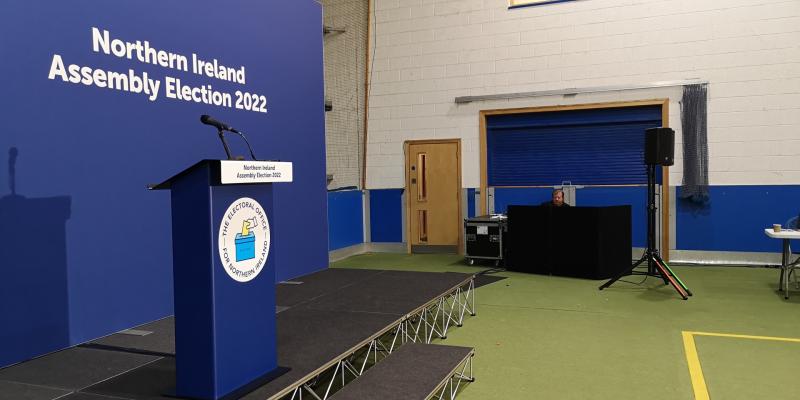 Counting at Magherafelt Count Centre has been suspended.

After a gruelling day of counting in Magherafelt, six candidates have been elected in County Derry's three constituencies.

Delays marked the beginning of the day at Meadowbank Leisure Centre as seven constituencies and their associated press, candidates and election teams flocked to Magherafelt.

By mid-afternoon, Sinn Féin were celebrating their first success as former Deputy First Minister Michelle O'Neill romped home in Mid Ulster with an increased vote of 10,845.

It proved fruitful in Foyle also, where young candidate Pádraig Delargy topped the poll and was elected alongside the SDLP's Mark Durkan.

East Derry proved a slower burn, with the DUP's Maurice Bradley getting over the line shortly before 10.00pm to become the constituency's first elected MLA.

The DUP's Keith Buchanan goes into Saturday just 15 votes short of the quota in Mid Ulster.

As all three counts were suspended, four candidates remained in the running in Mid Ulster, nine in Foyle and seven in East Derry.

Counting will begin again in Magherafelt at 9.00am on Saturday morning.