A joy to be part of Legenderry Relay for Life 2022 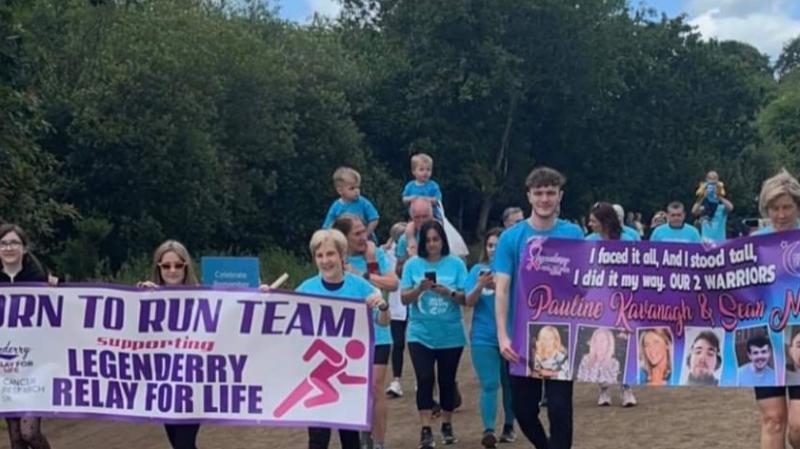 These were the poignantly inspiring words of sisters, Shauna Doherty and Rachael Kavanagh, part of the Born to Run team which took part in the Legenderry Relay for Life 2022, in St Columb's Park at the weekend.

Speaking to Derry Now, Shauna and Rachael's love for their mammy, Pauline Kavanagh, from Chamberlain Street, shone through the whole time. 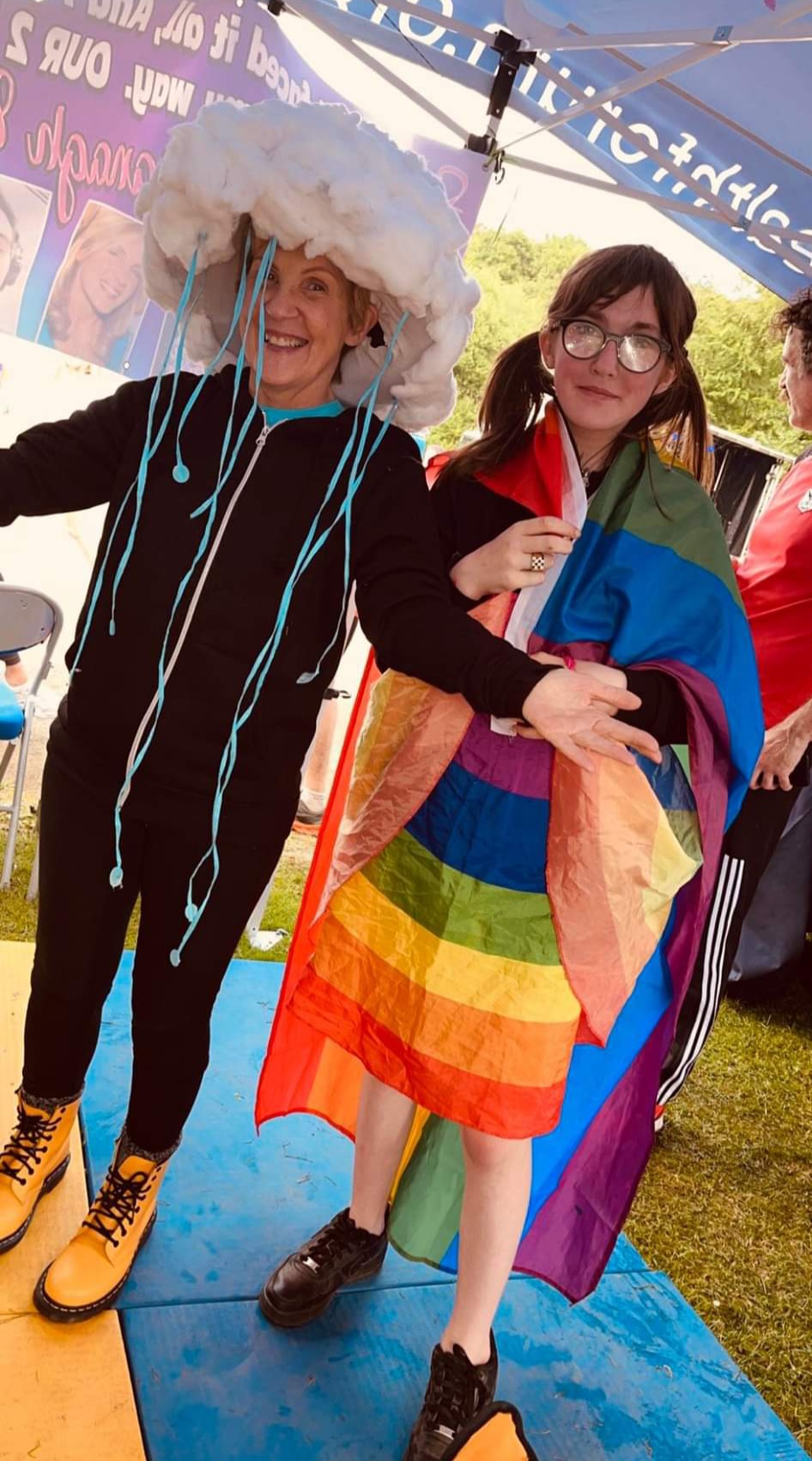 Pauline Kavanagh with her eldest grandchild, Isabella, during the Crazy Hats theme hour wearing a fabulous hat Pauline made herself.

Shauna said: “The story really starts at the end of 2020, when our mammy, Pauline, was diagnosed with Stage 3 breast cancer. Since then, she has undergone extensive treatment and is currently receiving chemotherapy. The early stages of lockdown were very difficult for everyone, but particularly vulnerable adults.

“Mammy is now doing great. She is a very determined woman. We call her our 'Marathon Mammy'. She runs marathons, so the diagnosis came as shock to us all. She was a very healthy woman and had never missed a day of work in her life.

“Then mammy sent us a message, last year, saying she had signed us up for the Cancer Research Legenderry Relay for Life 2022, so we buckled up our seatbelts because we knew she was going to keep us busy.

“But, even then, we really under-estimated how motivated and energetic mammy was going to be in raising money. She has been so determined to do something to give back for all of the treatment she received. She cannot speak highly enough of her nurses. She just thinks they are all incredible,” said Shauna.

She praised the event's 'incredible' organisers and facilitators. 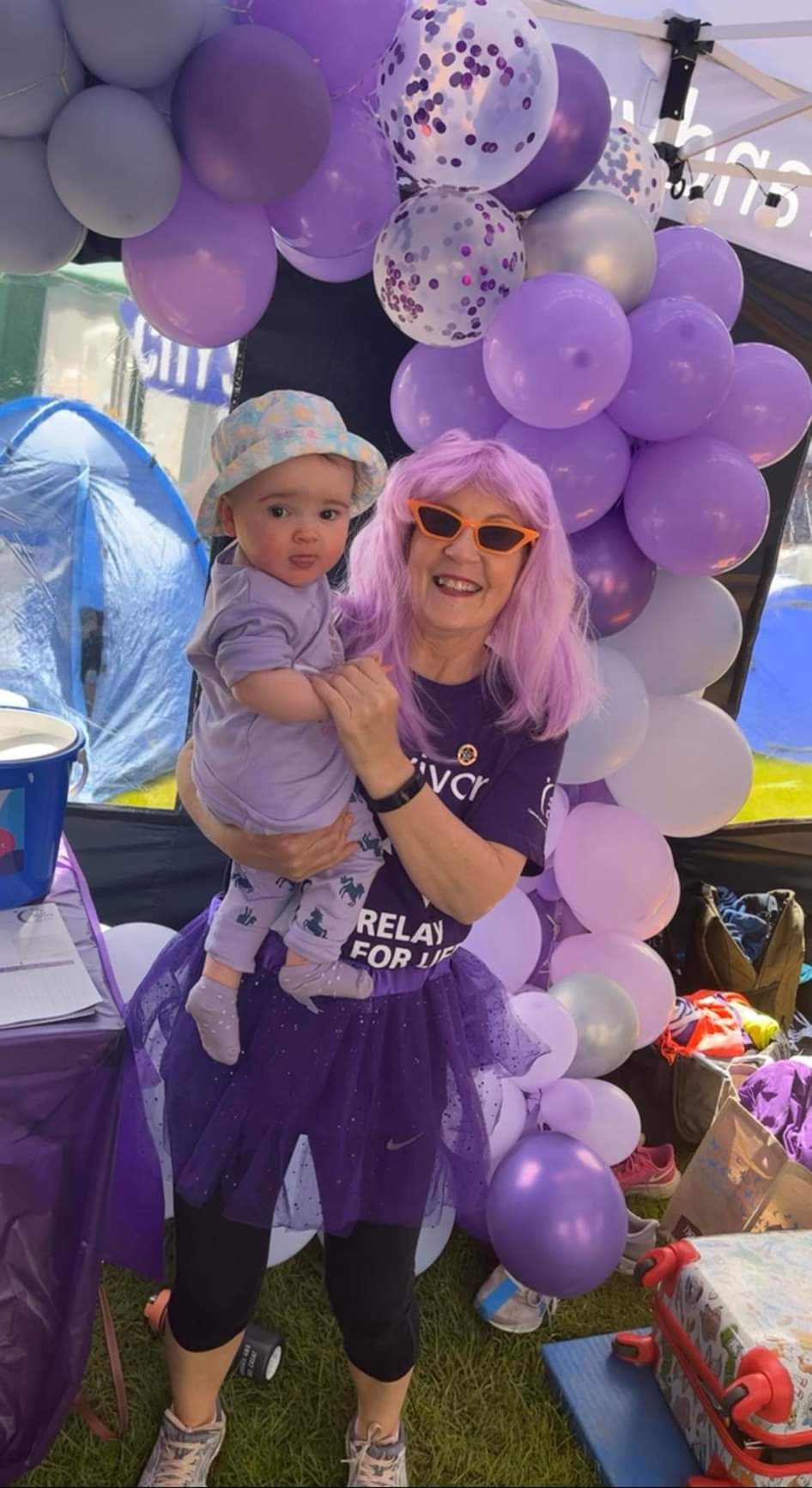 Pauline Kavanagh with her youngest grandchild, Róise, during the Power of Purple theme hour.

“They supported all of the teams that signed up, giving them fundraising ideas and practical support and promoting their events online,” said Rachael. “And the event itself was such a success. It was a joy to be a part of it.

“The first person to donate to the Born to Run team was my mammy's aunt, Peggy Moore, who turned 90 in May. For her 90th birthday, she asked for cash presents and she gave the cash presents to my mammy as her first donation.

“Originally, when we started, the eight people who signed up had a target of £200 each but Pauline just kept everyone really motivated. Two members of the team, Robert Taylor and Sandra McKeever, competed in the Connemara Ultra Marathon. The amazing Sandra was the first woman home.

“Our big sister, Joanne Kavanagh, is the dancing director of Holly and Kavanagh Dance Academy in Dublin. They ran a special school event fundraiser and my mammy's employer, Ladbrokes, donated £2,500. Our target just kept moving and moving. And then, my mammy and my sister did so many raffles and hampers,” said Rachael. 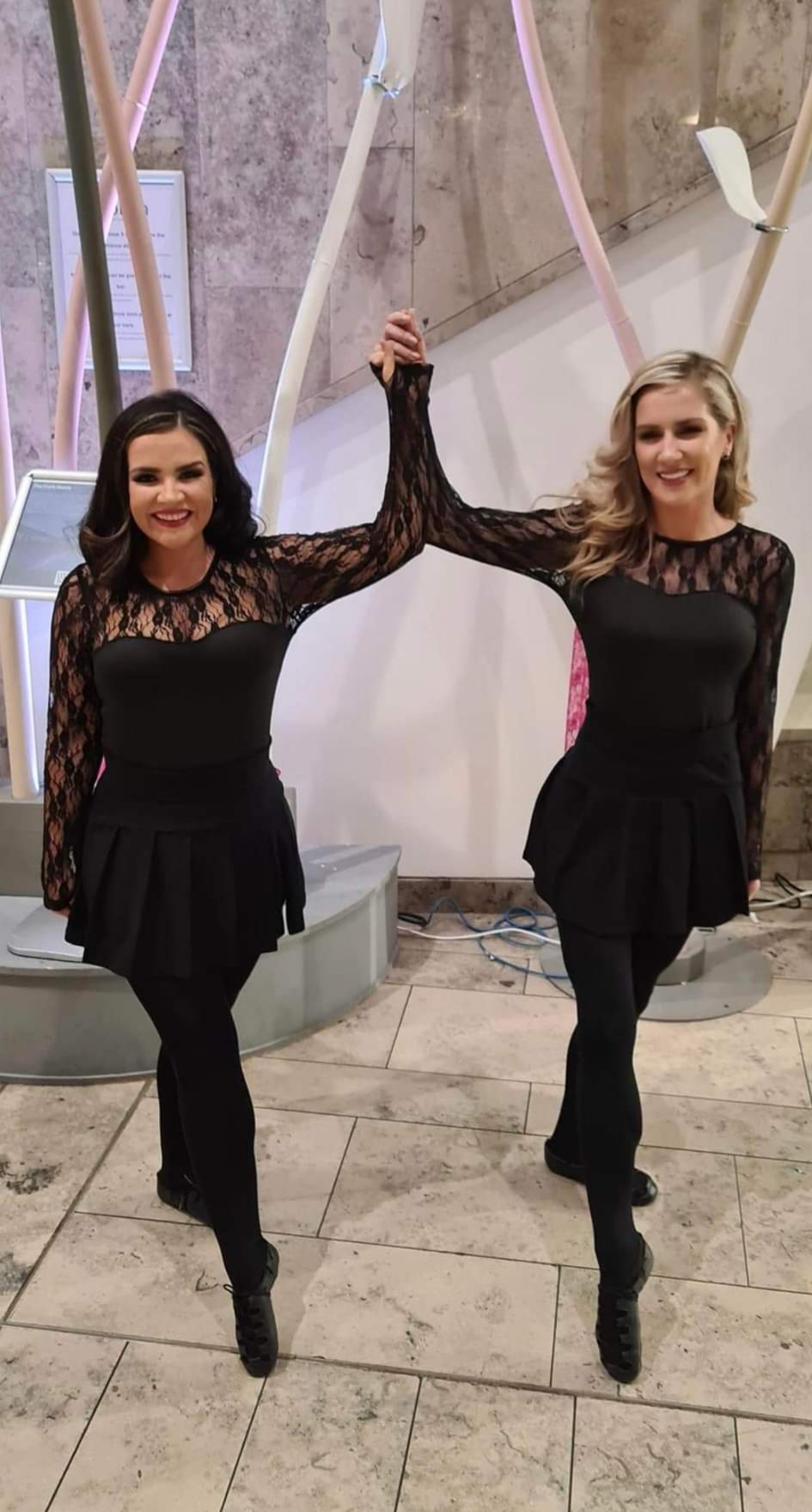 Shauna Doherty and Rachael Kavanagh who won the veteran's competition at Derry Feis this year.

“We won,” said Shauna. “We did a two-hand dance. From we were three, we all danced for the McConomy School of Irish Dancing. Our Joanne is a several time world champion. She was in Michael Flatley's Celtic Tiger. She is an amazing dancer. We have another cousin, Cyra Taylor, who is currently Morrighan, the bad girl, in Riverdance. Cyra was on our Relay for Life team too.

Pauline with her partner Georgie Harkin from the Bogside Brandywell Health Forum.

“Sandra also did a 'How many miles can I run in 24 hours for Relay for Life?' on the day. She was incredible. She ran 100 amazing miles. Everyone was watching in complete admiration.

“As of Tuesday, our fundraising total had exceeded £11,000. Mammy is ecstatic and delighted. She is such a humble, quiet woman but she feels so proud. We feel so proud of her. She is so thankful to everyone for coming together and supporting her. And her positivity and determination is inspiring. She keeps going and going. We think is it because she is off work and she needs something to keep her occupied, that was the reason for all the hampers,” smiled Shauna.

Donations to Relay for Life can be made HERE.

Rachael said 'Born to Run' was also running for Sean Nelis, whose mammy and Pauline are good friends.

She added: “We were all running for lots of reasons. We have all lost and we have all had family members, loved ones, who have been passed away and been affected. We had a beautiful banner made up with a big picture of mammy and a big picture of Sean.

Team member Sandra, who ran 100 miles over the 24hrs at the Relay for Life event, entered the Connemara Ultra Marathon this year alongside Robert Taylor as part of the fundraising efforts and was the first woman to finish.

“Mammy is such a keen runner, she ran home from Altnagelvin after her chemotherapy. She took her trainers and ran home, to Chamberlain Street. We couldn't believe it.

“Mammy is absolutely determined to get back to work and learn the new system they have installed. We are trying to restrain her from breaking into the office while she is still undergoing treatment. Treatment is tough. Our hearts go out to anybody who is going through it at the minute. Mammy is also thankful for the supportive network she has around her. She was overwhelmed with the amount of love. The Legenderry Relay for Life 2022 was a joy to be a part of. I would encourage anyone considering entering it to definitely go ahead. It was fantastic. We will definitely be back. Mammy and all her sisters: Donna, Sandra, Gina, Elaine, Caroline and our granny Isobel came out for the day,” beamed Rachael and Shauna.