Festival's comeback after lockdown brings ghouls, spooks and many more out into the streets in Samhain celebration 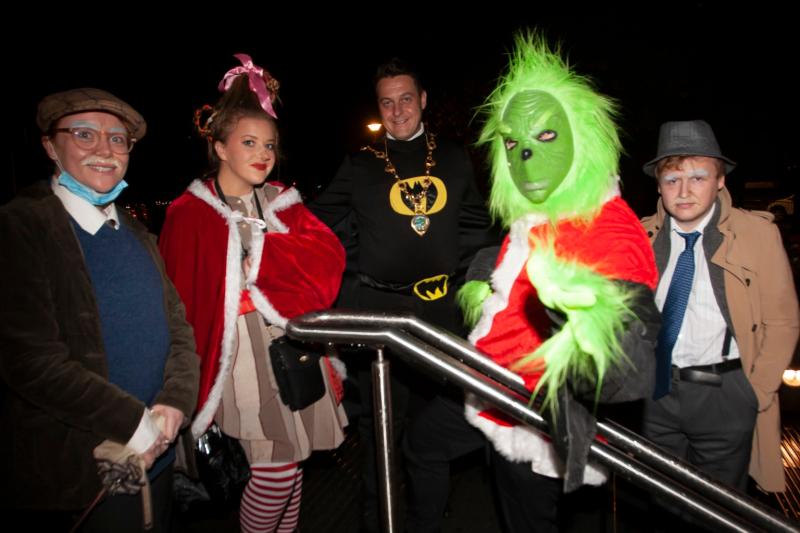 Mayor Graham Warke said it was “such a joy to see people returning to the city's streets” after the Derry Halloween Festival returned with a bang last weekend.

Due to the Covid lockdown cancelling last year's event, many had been eagerly anticipating the festival's comeback with extra effort and planning going into this year's costumes and activities.

And the effort was all worth it with the city putting on a fantastic extravaganza of a weekend that had ghouls and witches crawling out from every dark alley to celebrate this 'spook-tacular' occasion.

Not even the weather could dampen the spirits of the thousands who flocked to Derry – although rumour had it that the rain put off Count Dracula from coming as he didn't want to get his hair wet.

The celebrations came to an explosive end as a dual fireworks display lit up the skies over the River Foyle on Halloween night, bringing the event to a reluctant close. 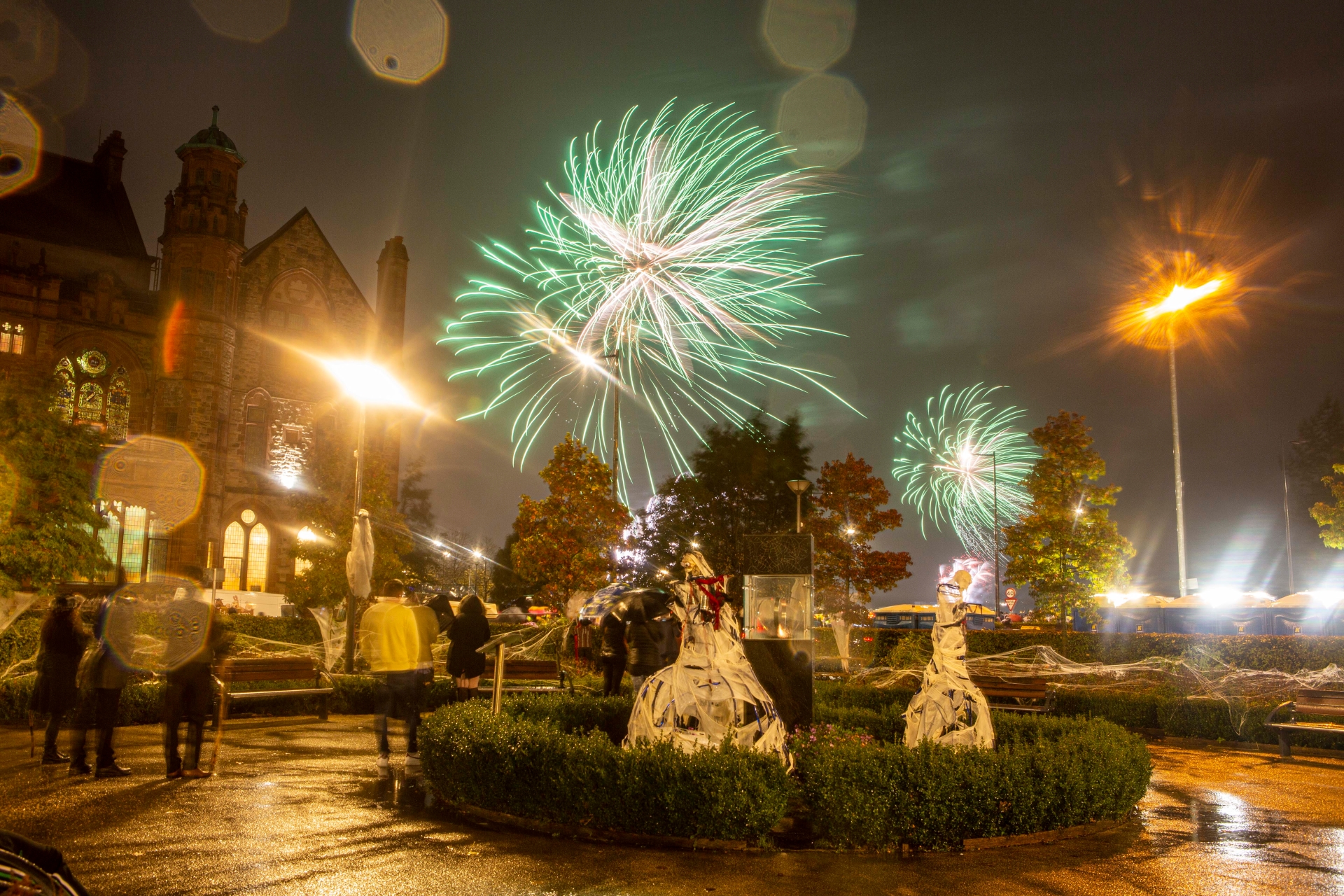 The fireworks are in full flow as the closing of this year's Derry Halloween Festival ended with a big bang. Pic: Lorcan Doherty Photos

A delighted Mayor passed on his congratulations to all involved – organisers, residents, tourists and ghosts – and said the weekend was a fantastic return for Derry's much-loved event.

He said: “We have all had such a challenging 18 months and I know there was great disappointment when the festival couldn't go ahead in full last year, so it has been such a joy to see people returning to the city's streets this year.

“So much has gone into the careful planning of the new format for the event and we are delighted at the support we have received from far and wide.

“Derry Halloween is nothing without the people who make it special, and this year that has been even more important. 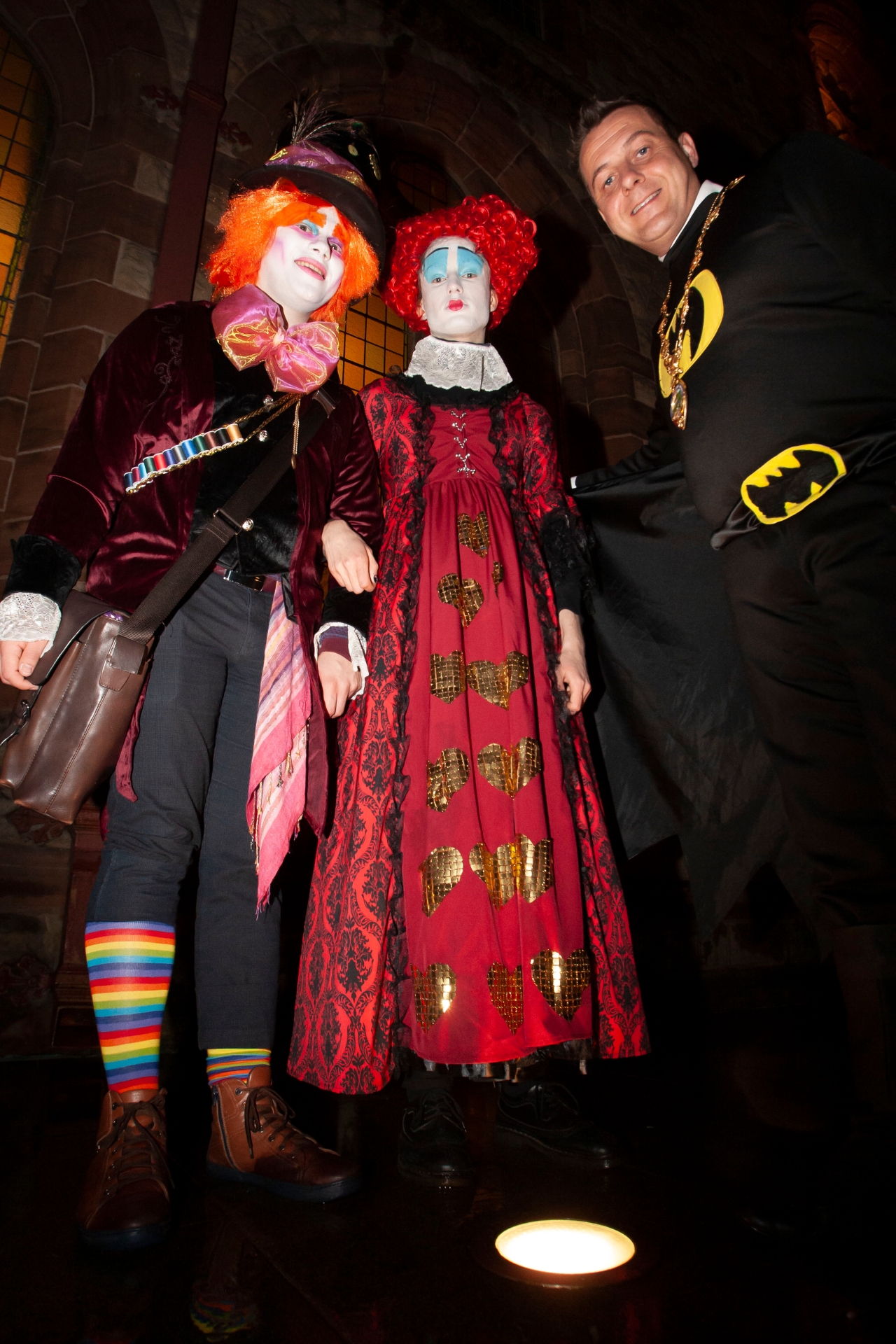 “It's been a celebration of getting together again – albeit with some measures to keep everyone safe – but a fantastic coming together to share something that brings delight and entertainment to so many people.

“I want to thank the Council's team who have worked so hard over the past few months to make this happen.

“I also want to thank all our community and creative partners for sharing their amazing talents, the statutory agencies who made the safe delivery of this event possible, and our government and tourism partners for their dedication to local culture.

“But most of all, thank you to all our visitors, and the people of this City who have turned out this weekend to reawaken the Walled City.” 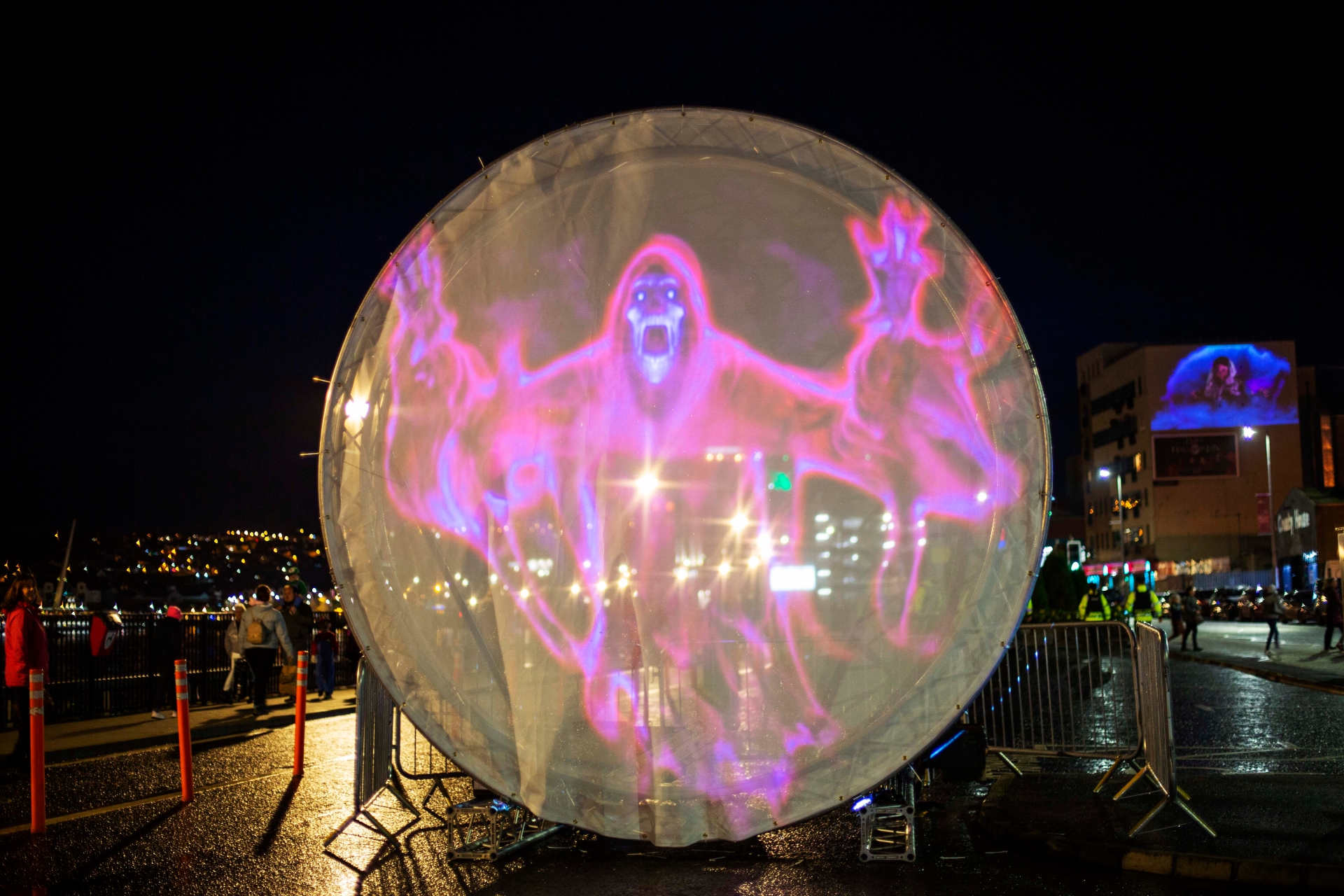 A sure sign it's definitely way past your bedtime when this ghoul illuminates the Derry night. Pic: Lorcan Doherty Photos

Head of Culture with Derry City and Strabane District Council, Aeidin McCarter, said the weekend's planning had been a challenge, but also a huge pleasure to bring the festival back this year.

She added: “Of course we have had to face challenges this year which we worked hard to address, and during all our planning we were mindful that me may have to adapt to changing circumstances.

“If anything the past year and a half has taught us, it's that you can't take anything for granted and flexibility is key.

“The Festival and Events team have worked closely with Tourism Northern Ireland, Tourism Ireland, Northern Ireland Tourism Alliance and other industry bodies in developing a safe plan for this year's event. 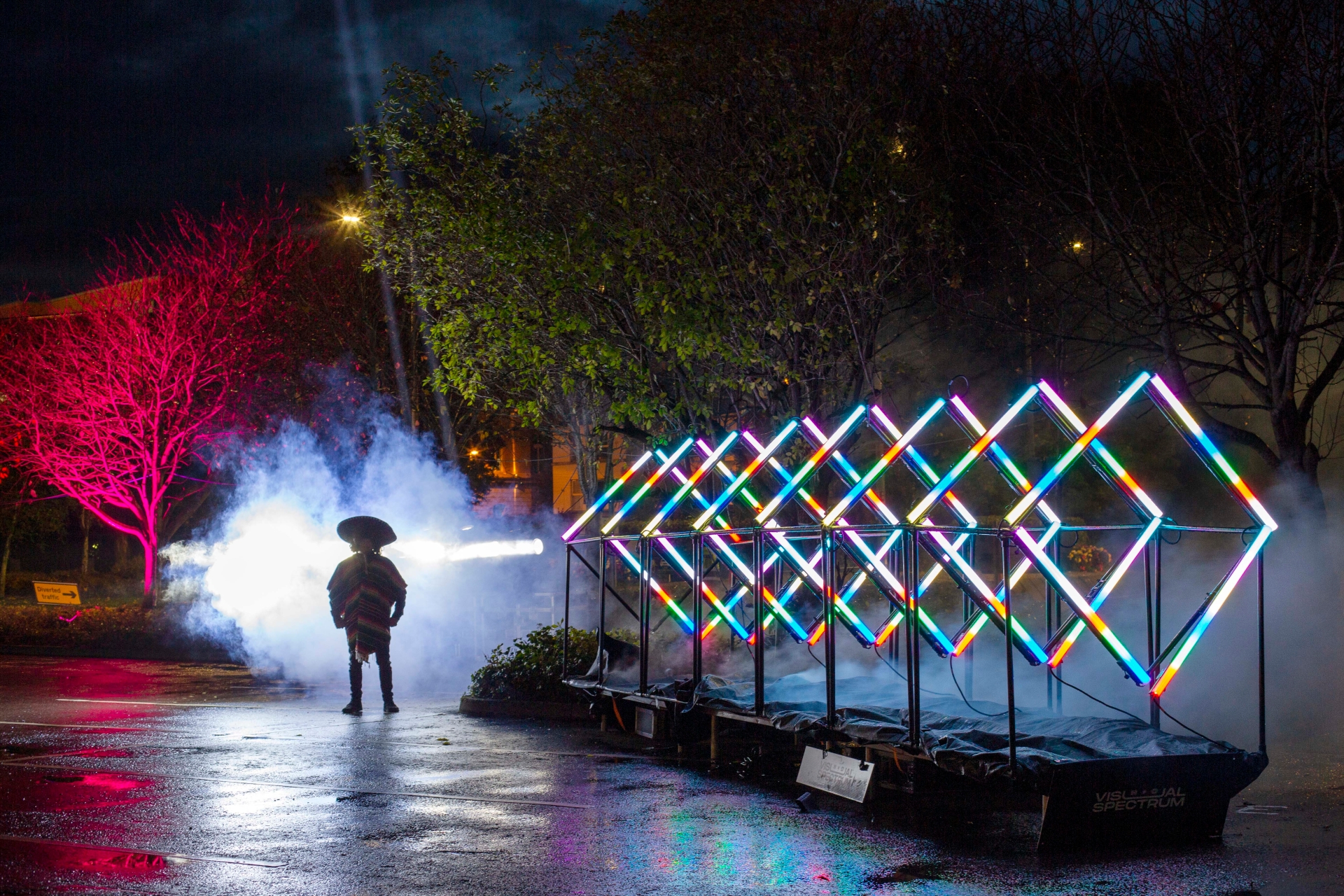 A close encounter with this familiar-looking extra-terrestrial being might make you want to phone home. Pic: Lorcan Doherty Photos

“I am delighted to see that so many people were just waiting for the return of Derry Halloween and we had tens of thousands of visitors here over the course of the weekend.

“Thank you to everyone who followed our guidance in terms of safety, and played their own part in making Derry Halloween a success.

“Local businesses in particular have been thrilled to see the celebration back as it has such an impact on the local economy.

“It has been a real pleasure seeing people embracing the festivities, getting into their Halloween costumes and getting out and about once again.” 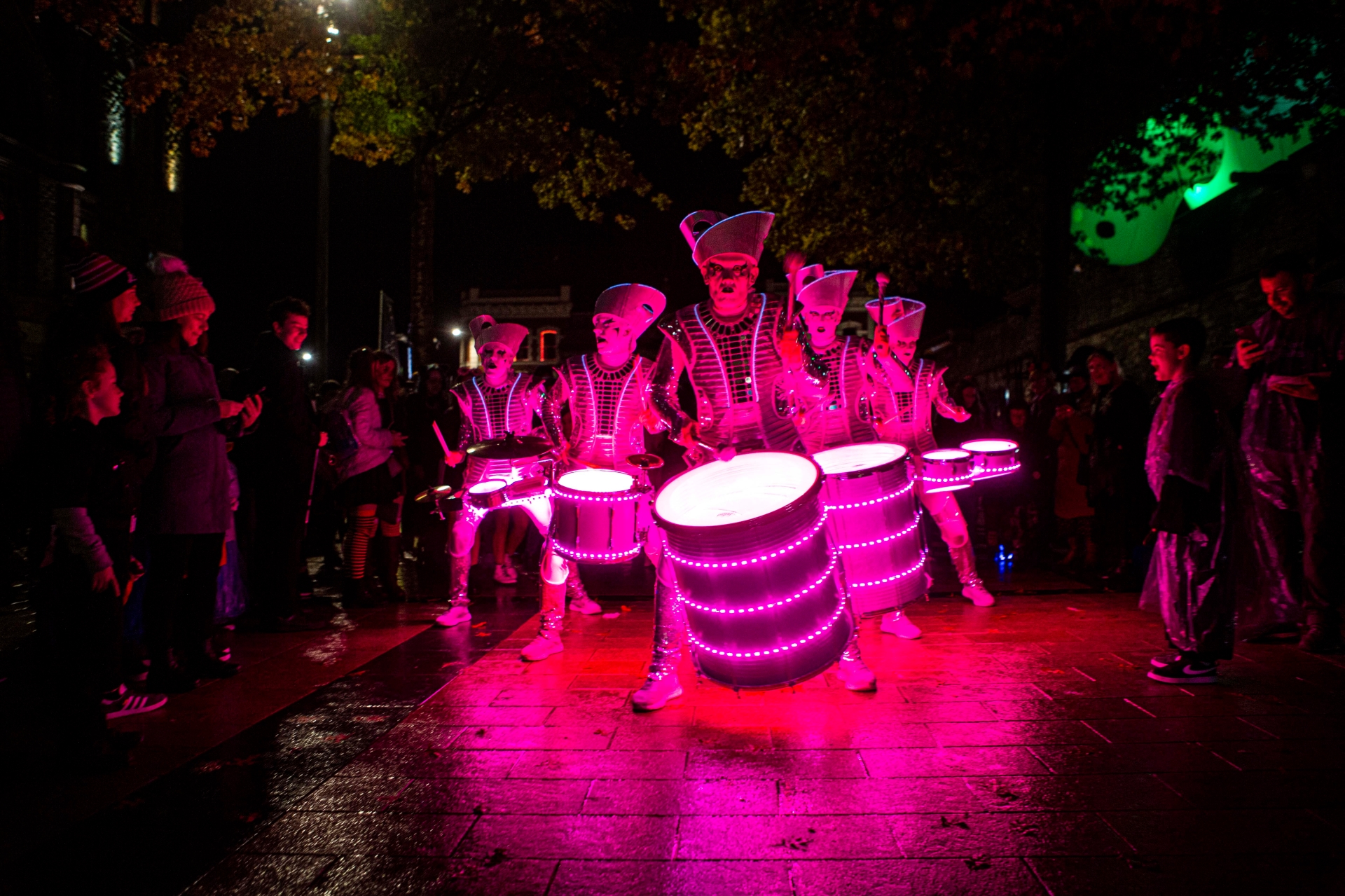 No it's not The Grateful Dead but Spark! This band were anything but horrific as they laid down the beat for the Halloween celebration. Pic: Lorcan Doherty Photos