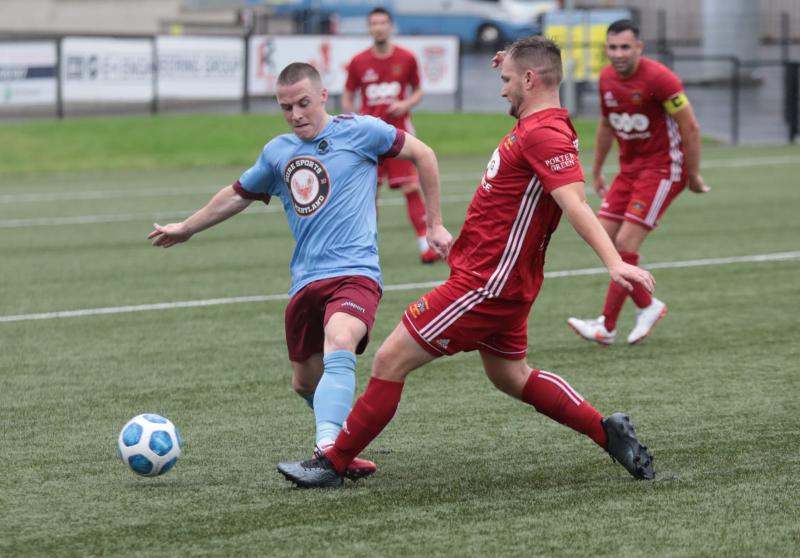 Institute boss, Brian Donaghey, said he got the reaction he wanted from his players after last Saturday's 0-0 draw at Ballyclare Comrades.

The Sky Blues supremo was less then impressed with his team following the previous week's home loss to Newry City and demanded his charges step up to the plate.

Given the fine start Ballyclare had made to this season's NIFL Championship, it looked like getting anything would be a tough ask for Institute but a determined performance brought home a well-deserved point.

Donaghey's men were the better team and could count themselves unlucky not to have won had Liam Walsh not missed from the penalty-spot.

“Listen, better players than Liam Walsh have missed penalties in the past,” said Donaghey.

“We a had a few opportunities later on in the game when they went to ten men.

“I would have taken a point at the start of the week but, going on the balance of play and how we performed, when I woke up on Sunday morning I was probably looking back and felt that was two points missed.

“Our keeper (John Connolly) had two great saves to make late on. Although one of them came after he miskicked a pass from a kick-out.

“We joked about it afterwards and he said 'I had to make the save because of my mistake'.

“But he didn't really have much to do apart from make those saves. I don't remember him making any more outside of those.

“On the whole, during open play, I thought we were very, very good. It's as good as we've played these last few weeks and at a tough, tough venue as well.

“I wanted a reaction from the defeat against Newry the previous week and to be honest, I think I got it.

“Shaun Doherty was excellent – his second-half performance was as good as I've seen at Championship level. Sean Leppard doesn't get much praise but he just goes about his job very unassumingly. He does keeps things very simple and makes it look easy. Rhys McDermott also deserves credit as he kept their playmaker very quiet.

“We knew once we had some of our bigger players back we could get a performance like that. Liam Walsh and Shaun Doherty were missed against Newry and having them back for Ballyclare was a big help.

“We've got Brendan McLaughlin back from suspension for this week's game at Annagh United. To be honest, he could have been the difference for us at Ballyclare had he been playing. However, he had racked up five bookings and had to sit out this game.

“We hope to have Cormac Burke back in training this week which will be a massive lift to have your captain back. Add him and Brendan to any Championship squad and there will be an improvement.

“Once we have our best players on the pitch, then we're definitely a lot more competitive. To be fair, last week against Newry was probably the only time we were not competitive.

“It was also good to get responses from Oran Brogan and Jamie Dunne as well. I spoke to them before the game and said I wasn't happy with the performances of late.

“I said 'listen, we really need a performance from you today because Ballyclare is a tough place to go to and their wide men are a threat. You are going to have to do a lot of work up and down the line and be an attacking threat also'.

“Without being fantastic, they both put in a very honest shift and were much-improved on the previous weeks.”

Institute are back on their travels again this weekend with an away match at Annagh United – a journey that looks to be a tight squeeze in more ways than one.

Donaghey added: “Annagh have a very tight and narrow pitch. I've only had one experience of it when I was at a cup game there with Cliftonville.

“It's a very long pitch too – very strange to look at. But listen, everyone has to go there. That's their home pitch and we will have to deal with it accordingly.

“I think we'll probably have to play a different formation as the pitch wouldn't be wide enough for us to play four-four-two. I always favour four-three-three but you need the players to play that formation – and right now we don't.

“But we'll have a gameplan in place between now and Saturday. I'm looking forward to it already.”