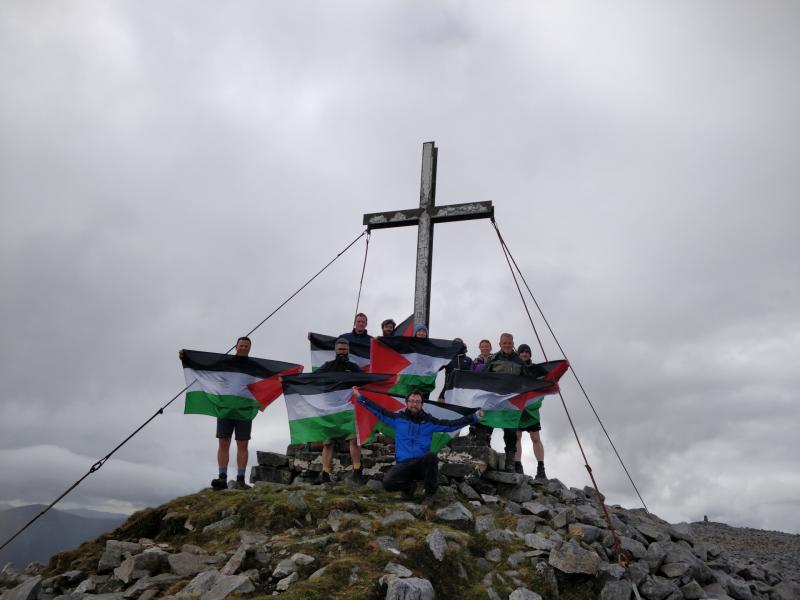 A group of Derry activists scaled the heights not once but twice as they completed a gruelling charity climb.

They were also joined by fellow climbers, Damian Gallagher and Damian Kelly from Co. Donegal and Co. Tyrone respectively.

The group did the “Two Peaks In One Day” challenge to raise funds for the organisation, Medical Aid for Palestinians.

Medical Aid for Palestinians (MAP) works for the health and dignity of Palestinians living under occupation and as refugees.

They provide immediate medical aid to those in great need, while also developing local capacity and skills to ensure the long-term development of the Palestinian healthcare system.

Organiser of the fundraiser, Derry's Gavin Campbell, said: “As a result of living under occupation or having been displaced, Palestinians have had their rights and dignity have been stripped from them.

“Having no access to an effective, sustainable and locally-led system of healthcare is just one of many injustices inflicted upon the Palestinian people by the brutal apartheid Israeli regime."

“At times of humanitarian emergency, 'Medical Aid For Palestinians' are ready to respond rapidly with aid and assistance. We wanted to do something that would bring focus to the everyday realities of people in Palestine while raising funds to support the efforts of those providing vital medical services in Palestine."

“MAP and other organisations bear witness on the ground in Palestine to the injustices caused by occupation, displacement and conflict. We think it is of upmost importance to speak out and act in solidarity internationally with the Palestinian people.

“Israel has the backing of the worlds leaders, whenever and wherever we can, we have to send a clear message – this support for apartheid is not being done in our name."

“There is already immense solidarity with Palestine from Ireland, it is recognised not only here in Ireland but in Palestine too.

“Small acts of everyday solidarity, be it, protesting and speaking out, refusing to buy Israeli goods or fundraising to ease the suffering in Palestine contributes to the global response and defiance to Israeli apartheid.

“If you're in a position to do so, you can donate to MAP and support our efforts this weekend. All donations are welcome and all money goes directly to MAP.”

For anyone wishing to make a donation, you can go to: https://www.justgiving.com/fundraising/twopeaksoneday