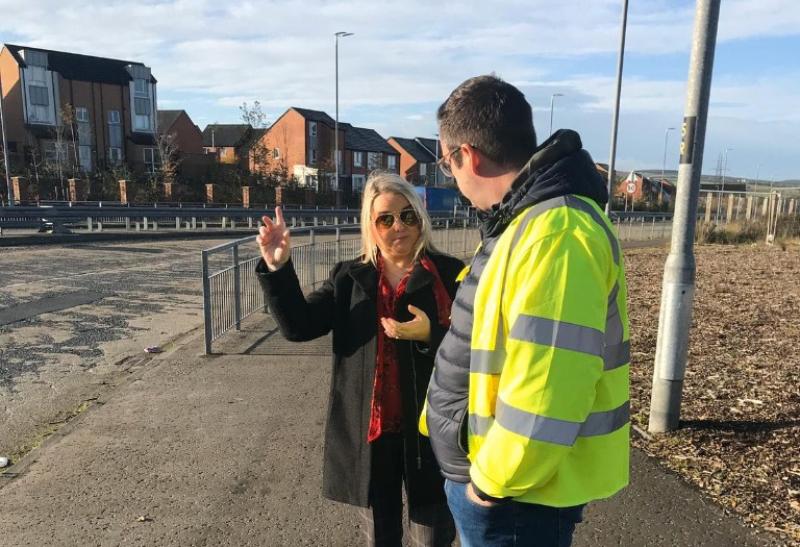 Cllr Sandra Duffy meets with a representative from Roads Service in Skeoge back in 2019 campaigning for a pedestrian crossing to be installed on the Skeoge Link Road. The crossing is now in place.

A pedestrian crossing installed on the Skeoge Link Road will hopefully improve road safety and get motorists to curb their speed, says Councillor Sandra Duffy.

The Sinn Fein councillor who represents the Ballyarnett ward said that over the years, the Skeoge Road has become a hot-spot for 'death-racers' who view it as a racing track as well as normal motorists breaking the speed limit.

The surrounding area has seen more residential properties springing up over the years and with one spot in particular having one grocery store, the Eurospar, residents have had to chance their luck with the speedsters in crossing the road in order to do their shopping.

Because of the speed-merchants, a number of road accidents have occurred and Cllr Duffy has worked tirelessly to get measures put in place to get motorists to take their foot of the gas.

And she is hopeful that the pedestrian crossing, along with other measures, will make the road much more safer for residents.

Cllr Duffy said: “As a local representative for the area, I have been very active with regards to the Skeoge Road in relation to road safety for a number of years.

“We have seen the area become more built up with residential properties and young families moving in and as a result the Skeoge Road has got busier.

“As a result we have seen over the years a number of accidents on the road with cars coming off the road and mounting the roundabout. Such incidents have happened at all times of the day.

“There has been a mixture of people who have been 'death-driving' as well as normal motorists who have just been driving far too fast on a road that they think they can do so on.

“I have been trying to remind motorists for some time that this is a built-up residential area and they do need to take care on the road.

“I have been working with the Skeoge Community Hub in relation to road safety issues and as a party, we recently put up 'Go Slow' signs around the road just to remind motorists to mind their speed.

“I have also been campaigning with Roads Service in relation to them making the road safer – particularly around the Eurospar shop because we see children and older people crossing that road on a daily basis and it's very dangerous at times to the point where they are literally taking their lives into their own hands crossing that road.

“Working with Roads Service, we have now got a pedestrian crossing at the shop which was the aim all along. Roads Service were reluctant to put it there to start with because it would slow down the flow of traffic.

“But because that spot is a point of crossing at the shop, they needed to act. We have seen it installed now and it is active. It is great to see and it is a great road safety measure that we can promote within the community.

“Thankfully there haven't been any fatalities on the Skeoge Road. But I have been saying all along, it is just a matter of time – particularly in the evenings.

“I live quite close to the road myself and you can hear cars revving up and down the road. It is used as a race-track and this is something that I've addressed with the local neighbourhood policing team.

“At times they have set up patrols in the area and have worked with other units in the police to put out a presence to stop runaround cars and people who have been speeding on the road.

Even though Cllr Duffy has been successful in putting in measures to help road safety on the Skeoge Road, the problem of speeding motorists appears to have switched to another nearby road.

She added: “Because we have been pushing through with road safety measures on the Skeoge Road, motorists have been going around the Lenamore Road – to avoid police patrols – which is a much smaller road.

“The Lenamore Road has now become more congested and local residents there have been complaining about speeding motorists as well. I have asked for speed indicator devices to be put on that road. I have also asked the road service to conduct a traffic survey there to see if we can get traffic cameras in as well.

“We don't need to displace problems, we need to solve them.”