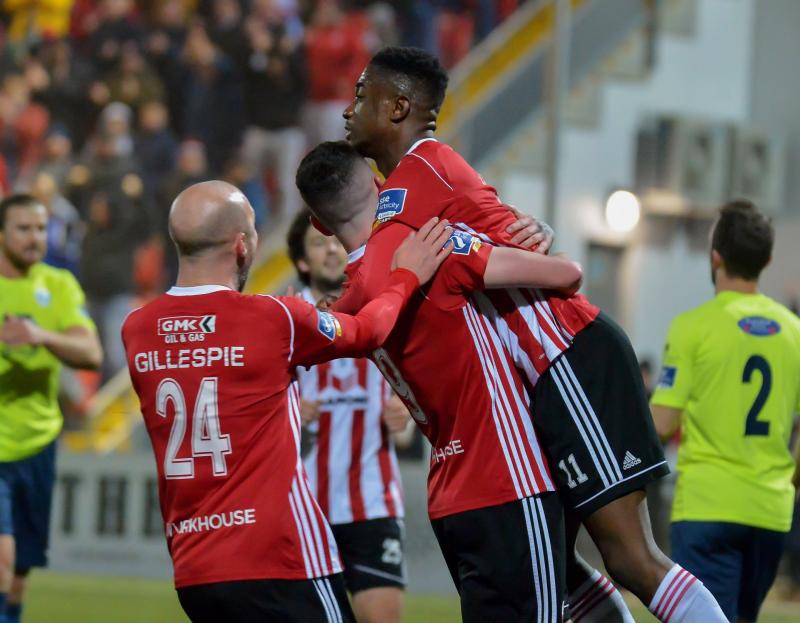 Junior Ogedi-Uzokwe is congratulated by his team mates after opening the scoring against Finn Harps on Friday night. PHOTO: George Sweeney (nwpresspics)

Colchester United may find it impossible to ignore what Junior Ogedi-Uzokwe has done at the Brandywell this season, which could be bad news for Derry City fans everywhere.
Little was known about the 25-year old when he first came to the club earliy in 2019, but he quickly made his mark, impressing in pre-season before becoming a regular starter in Declan Devine's first eleven.
It may have taken longer than expected for Junior to get off the mark at his new club, his first goal coming against Longford in the EA Sports League Cup at the start of April, but since then he has been one of the stars in this new look Candystripes team. Junior has provided some memorable moments along the way, his hat trick at Turner's Cross amongst them, not to mention scoring the most spectacular disallowed goal in Brandywell history when his unbelievable overhead kick against Finn Harps was disallowed for high feet.
Still, there was little, if any, talk about Junior winning the Golden Boot going into the last game of the season until an early double against Harps on Friday night left him tied with Dundalk's Patrick Hoban.
There was a false alarm during the games on Friday night with word coming through from Oriel Park that Hoban had sneaked back into the lead after scoring against St. Patrick's Athletic, but that was quickly deemed an own goal by goalkeeper Brendan Clarke.
Within minutes of that news coming through, Junior took the ball out of the sky from Jamie McDonagh's pass and fired in his third to go clear in the scoring charts, and with Hoban being substituted, the privilege was his. It was a fitting end to a memorabkle night for the forward.
"Before the game I wasn't really thinking about the top scorer,” he admitted. “It was about winning the game, getting into Europe and that's be a massive achievement for us. But obviously when I got two goals at the start of the game, I thought I could get another one and who knows what could happen? That's what happened so I'm very happy about that.
"At first I heard he (Hoban) had scored one and the boys were trying to get me a goal but I thought it's just not going to be. As long as we won and got into Europe I was happy but it's a massive bonus and I'm just happy. It's crazy.”

Unknown
Junior was vehnturing into the unknown somewhat when he first arrived at Derry, but he quickly adapted, with his manager's faith in him helping settle a player who was not only new to the league but to the city.
"I literally came here and bought into the idea the gaffer had,” he continued.
“His plan was to finish in the European spots and thankfully we've achieved that. "For me personally, I thought I probably started the season a bit slow. Obviously it was a new team, a new league and playing out wide was different. But I adapted and the boys made it easy for me.
“I learned when to make runs and movements when certain players had the ball and they made it so easy for me to adapt and get used to the tempo and the way football is played here.
“That's what we set out to do. Individually I thought I could get a few goals and help the team out and it's been great but to finish top scorer is amazing."
Not many players have the experience of scoring a hat trick in front of a packed Brandywell, but Junior, who hita treble at Cork City eralier in the season, will remember that feeling for a long time.
"It felt great, especially at home as my last one was at Cork and the atmosphere wasn't the same,” he explained. “At home it was brilliant, it was electric, I'm so happy.
"Everyone is so happy and buzzing. It's just amazing. We set out to finish on a high and thankfully we done that. It was a tough game but we worked hard for each other and I'm delighted.”
Junior has played in a number of different postions over the course of the 42-game season, but he has never complained, becoming a real team player for the Candystripes.
"I'm used to playing up front but I've enjoyed playing on the wing because football here is played properly,” he stated. “Football is on the floor and it just made it easier for me to settle in and adapt my game. I did the defensive stuff as well. I've enjoyed it and it's been brilliant. I've really enjoyed it. The boys made it easy for me. It's been amazing.
“Coming here, I didn't really know what to expect but it's been a good season overall. It's been amazing and I'm just happy."

Big decision
Every Derry City fan will be waiting anxiously to discover if Junior will come back to the Brandywell next season, but it all depends on a number of factors, one of which is Colchester United.
"I haven't really thought about what's next,2 Junior admitted.
“I've just been focused on the games and getting into Europe so I haven't really thought much about the future. Anything can happen. I don't know what's going to happen but I'm just so delighted with the win.
"Off the pitch it's been good. I've always said that everyone in the city has been brilliant with me. Going out, everyone has been friendly and it's just been a friendly environment and I haven't had any trouble since I've been here. It's been great.”