Dundalk are ready to tempt Greg Sloggett away from the Brandywell. 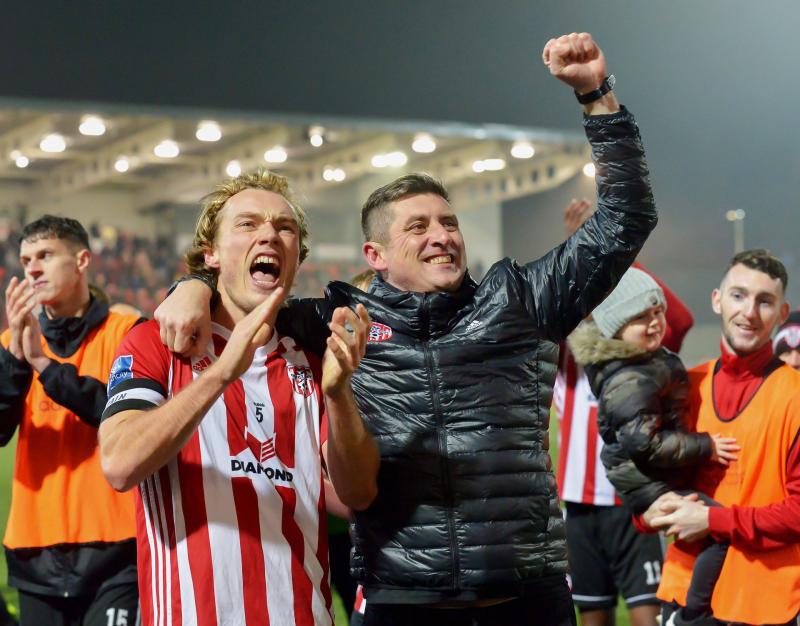 Dundalk are ready to tempt Greg Sloggett away from the Brandywell.
In what has unfortunately become an annual tradition for Derry City fans, the league champions have looked to the Candystripes to upgrade their already significantly talented squad, and Sloggett is the number one target for manager Vinny Perth as he builds towards 2020.
Sloggett, who moved from UCD to City at the start of the 2019 season, was a key part of the success at the Brandywell this year which saw Declan Devine lead the Candystripes to fourth place, European qualification and an EA Sports League Cup final.
The 23-year old is now a free agent after the playing season ended and is considering his options, although it is still possible he could stay at the Brandywell having already had discussions on a new contract with Declan Devine.
Yet with Perth also a big fan of Sloggett, it seems likely that the midfielder will have no shortage of options before he commits to playing next year.
Sloggett, like his manager and team mates, was in celebratory mood after Derry City defeated Finn Harps 4-0 on Friday night to seal European football next season , an achievement which Devine described as his greatest of his managerial career.
"We were selling a pipedream to players in December,” he stated. “The place didn't have the most positive feel about it when we came in last November because of the season last year.
“We've been magnificent. We went to very difficult venues and performed and to see the Brandywell full again, that's definitely my biggest achievement. Let's see where we go in the future but this is a night I'll not forget for a long time."

Change for the better
The feeling at the Brandywell on Friday night was in stark contrast to the mood around the club at this stage just twelve months ago, after an eighth place finish in the Premier Division. So much has changed in such a short time.
"I didn't really think about achieving Europe to be honest," Devine continued.
"I wanted us to get a good start and see where we were. I wanted a team that reflects the passion of the football club and honesty and work ethic of the football club.
"I watched last year and teams were coming from Dublin and Cork and they were walking in here and walking back out with three points and I didn't like that.
"Our guys fight for the club, fight for the city and fight for their families.
“Add into that they're not only fighting but putting on a brilliant display of attacking football, scoring a lot of goals and creating a lot of chances.
“The players deserve huge credit and I'm just over the moon for them."
It has undoubtedly been a successful season for Devine, his staff and his players, but the City boss is not content, and wants even further progress next season.
"We finished fourth but we want to push on and get better next year,” he insisted.
"It takes a lot of effort but I'm very fortunate that I have Kevin (Deery) and Paddy (McCourt) and Marty (McCann) and Declan McIntrye and all the backroom team pulling in the one direction. Those guys have put their life and soul into it.
"There's a lot of good people at this football club. We all share a work ethic and we all work extremely hard.
"Coming off the pitch there was supporters there who were eight, nine, 10 years of age. There were supporters who were in their 70s.
"It's a fantastic night for us but we have to strive to get better and not pat ourselves on the back too much.
“It's going to be harder next year and I'm sure a lot of clubs will put a lot of investment into it.”