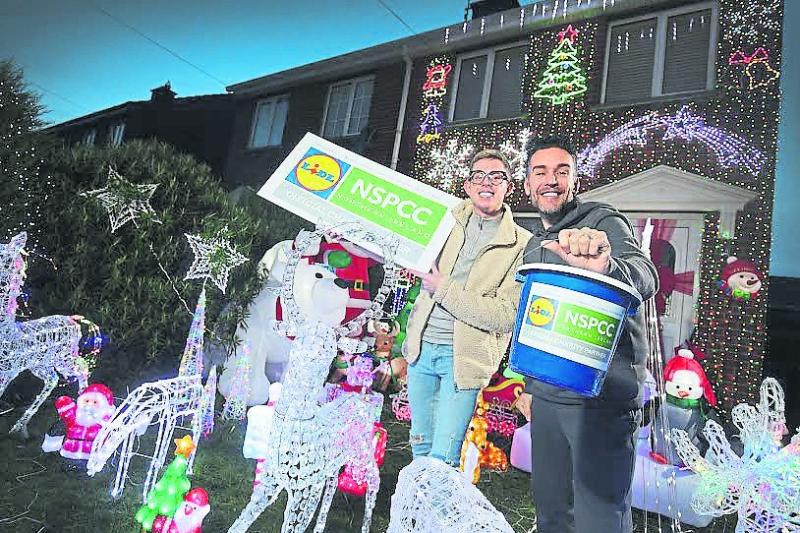 Gary Bailie and Dermot Bradley outside their Brunswick Road home.

A local couple have continued their tradition to light up their home with a Christmas bonanza display of lights and decorations in aid of a children's charity.

They have been decorating their home with spectacular festive displays for almost a decade and hope to smash their previous fundraising record as they reveal their dazzling Christmas light display for the first time at their brand new home in the Waterside area of the city.

Having recently moved to the Brunswick Road, Dermot and Gary have once again decorated their house from top to bottom in fantastic Christmas lights and decorations with a ‘Lidl’ help from local retailer, Lidl Northern Ireland.

Partnering with the retailer as part of its Christmas Lights for Charity campaign, Dermot and Gary are inviting visitors from near and far to enjoy their impressive display to raise vital funds for Lidl Northern Ireland’s charity partner NSPCC Northern Ireland by making a donation to the charity buckets located outside their home.

Dermot said: “We are delighted to partner with Lidl Northern Ireland this year to raise money for NSPCC Northern Ireland. Decorating our home at Christmas just started out as a bit of fun for us, but it has turned into an incredible fundraising initiative which we have now been facilitating for almost a decade.

“We just love Christmas and are thrilled that locals and people from further afield enjoy coming to see our display. We’ve added a few new pieces this year to add a bit of extra sparkle, so we’re hoping that more people than ever come by to visit us and donate to NSPCC Northern Ireland.”

The couple have previously raised funds for local cancer charity Paul’s Campaign and Foyle Search and Rescue. They laugh off any competition or ‘friendly rivalry’ with residents at Racecourse Drive – now branded Christmas Drive - who have also been decorating their street n the Shantallow area of the city to raise funds for charity.

Dermot added: “We have friends who live there actually. We are all raising money for a good cause and people should visit us all to get in the festive spirit, so we can all come together to raise much needed funds for great causes.

“If you’re in the area, or travelling up to see Derry’s dazzling displays, don’t forget to visit us on Brunswick Road and help us reach our fundraising target to support NSPCC Northern Ireland’s amazing work at a crucial time of year.”

“We’re thrilled to light up Christmas this year with a fantastic new initiative and to partner with Dermot and Gary who have created a truly spectacular display at their home.

“We are constantly in awe of the generosity of the local community in supporting Lidl Northern Ireland’s charity fundraising initiatives and we’re thrilled to invite them to experience Dermot and Gary’s incredible display this Christmas. It’s a real feast for the eyes and the perfect way to get into the festive spirit! We wish all of our customers and team a very safe and merry Christmas.”

Dermot and Gary’s Christmas lights display will be operating until the new year at Brunswick Road in the Waterside, with 100% of donations going directly to NSPCC Northern Ireland.