Ruaidhri Higgins thrilled but warns "We've done nothing yet!" 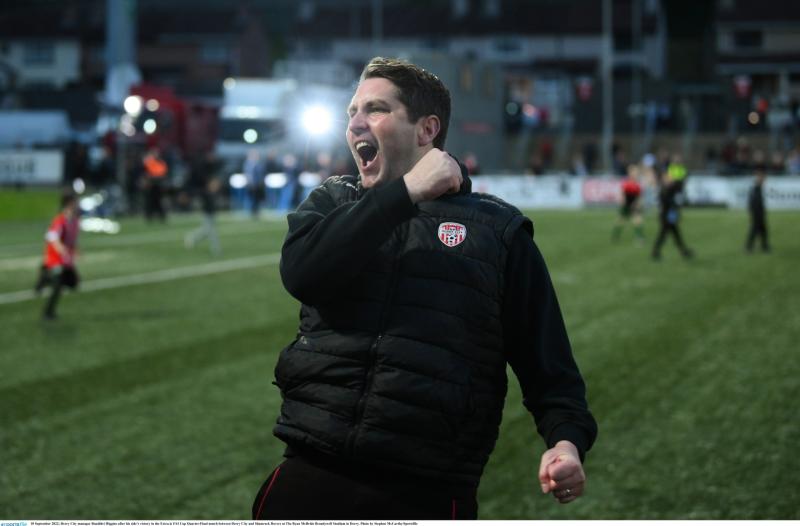 Ruaidhri Higgins has warned that Derry City cannot take First Division Treaty United for granted after the two were paired in the FAI Cup semi-finals.

The Candystripes are into the semi-finals for the first time since 2016 after a thrilling 3-1 win over Shamrock Rovers after extra time, while Treaty hammered UCD 4-1 earlier in the weekend. City will be strong favourites now to make their first FAI Cup final since 2014, but Higgins is not one to be complacent.

"Treaty put UCD away comprehensively," he warned. "I've always said we've done nothing as a team, and if we show any snobbery then we'll get turned over because they have shown what they are capable of."

The draw for the semi-finals came at the end of a pulsating game with Rovers in front of a packed Brandywell, with City seeing off 10-man Rovers after extra time.

"If you want to stay sane, getting into football management is probably not the right way to go. It's nights like these why we're in the game," Higgins continued.

"We like to do it the hard way quite often. We probably should have been further in front at half time. They went to a back four and a narrow midfield in the second half and it took us a while to get to grips with it. They were excellent in the second half and we had to get a foothold in the game and we did that with the two substitutes getting the second and third goal."

Higgins also paid tribute to extra time goal scorers Danny Lafferty and Brandon Kavanagh, who came off the bench to make the difference in extra time.

"That's Brandon's first goal for the club," he said. "He's had a tough time recently because he has found himself pout of the team. He showed real, real composure there to put it away and put the game to bed. Danny has also found himself out of the team since the mid-season break but he's found a big goal and that's something he has done his whole career. They were two big moments and we're delighted we could send this big crowd home happy."

Higgins was also thrilled with the input from the supporters in yesterday's game, and credited them for getting his team over the line.

"Without our supporters, we mightn't have got over the line," he agreed. "They were a credit to themselves and a credit to the club in how they conducted themselves and how they got behind the players. In difficult moments it would have been easy to get frustrated, but they stayed with us and it's a great night for us. We have a home draw now in the semi-final and hopefully we get another packed crowd."