Three in a row for Brian Ogs 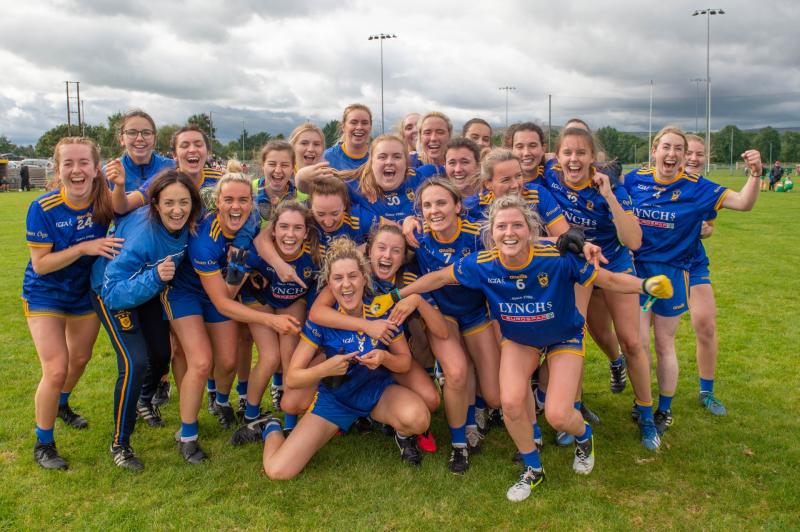 Steelstown Brian Og Ladies are Derry Senior champions for a third year in a row after seeing off a stubborn Ballymaguigan in Glen earlier today.

Last year’s beaten Ulster finalists are determined to put things right in 2022, but first they had to win this one against an opponent who they have become very familiar with over recent years.

After overcoming an early shock, Steelstown went on to dominate, and only some poor finishing and decision making in the second half, they would have ended this final much sooner than they did.

That said, there was no denying them the victory here, as, once again, they were the superior team by some distance, and once Aoife Collins and Orla McGeough scored two goals in two second half minutes to add to Dara McKeever’s first half strike, there was simply no catching them.

There was a disastrous start for Steelstown as they conceded a goal after just 27 seconds. Straight from the throw-in, Ballymaguigan went onto the attack and Nicole Nugent put Aoife McGlone in and she hammered the ball past Molly McBride to give her team the perfect start.

Steelstown responded well and could have been level within two minutes but Orla McGeough’s effort came back off the base of the post with Seona Walls in the Ballymaguigan goal well beaten.

The blue tide just kept coming however, and Steelstown scored five points within the next two minutes to take control of the game. McGeough got Steelstown off the mark, and seconds later Dara McKeever fired the ball past Walls into the net for the first Brian Ogs goal.

It could have become even worse for Ballymaguigan as Orla McGeough then added a point before Ciara McGurk blasted an effort off the post, Brian Ogs denied by the frame of the goal for a second time.

Darragh McKeever, Clodagh Laverty and two from Orlagh McGeough then added points to make it 1-6, 1-0 with 15 minutes played, and already there was a mountain to climb for Ballymaguigan.

St. Treas’ were doing their best to get a foothold in the game but each time they were crowed out by blue shirts, with Aoife McGough and Emma Connolly defending superbly, helped out by sweepers Katy Holly and Emma Doherty, giving them very little to work with at all.

Not even a yellow card for Megan Devine for a high tackle could derail the Steelstown momentum, with Laverty adding another free before Ciara McGurk chipped in ahead of a sensational effort from Aoife Collins to put Brian Ogs into a nine-point lead at the break.

Ballymaguigan had plenty to prove in the second half, and they started the attempt at an unlikely comeback very well, with Anna Martin scoring twice in three points to give St. Treas’ their first points from the very first minute of the game.

Orla McGeough responded with Steelstown’s first point of the half as the champions began to regain control, but they were very wasteful in attack, as they hit five wides in a 10-minute period, not to mention passing up several goal chances, as they failed to kill the game off in the process.

The accurate Anna Martin showed them how it was done with two successive frees to make it a six-point game in the last ten minutes, but just as Ballymaguigan were building some hope, Steelstown struck a killer blow.

Ciara McGurk was found in plenty of space and she ran clear, drawing the last defender before passing to Aoife Collins, who turned and placed the ball past Walls and into the net for Steelstown’s second goal to make it 2-10, 1-4.

Having waited so long for their second goal, Steelstown wasted no time claiming their third, with Orla McGeough and Dara McKeever exchanging passes, before the former ran clear and fired the ball past Walls to seal a third successive championship title for her team. With just over five minutes remaining, there was now no way back for Ballymaguigan at 3-10, 1-4.

Anna Martin hit another free for Ballymaguigan but the final say went to Steelstown with substitute Eimear O’Doherty scoring in the final seconds of the game.

The final whistle brought scenes of celebration which the Steelstown girls are now getting used to, as they continue on an extremely rich period in the clubs’ history. Derry has now been conquered again, and Ulster awaits, just how they planned it.