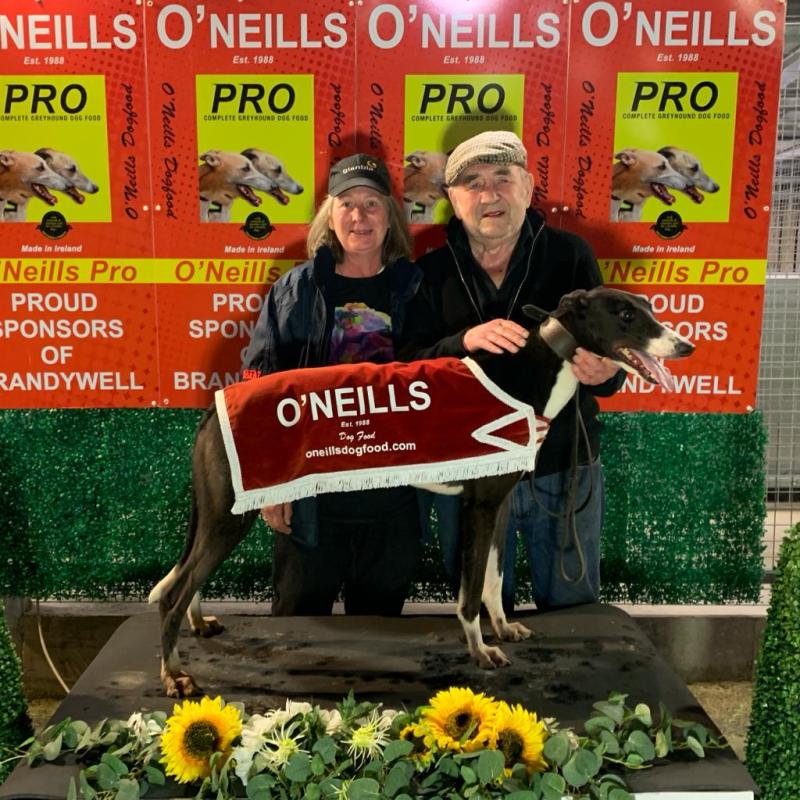 Following an action packed month of sponsored events and competitions at the Brandywell, we returned to normal racing action ahead of the Brandywell Track Lotto Derby, which is the next feature event on the calendar, scheduled to start on 26th September.

There was plenty of promising young talent to admire on track on Monday and first of those was the James Thompson owned Glenhead Tiger (Pestana x Causeway Nancy, Apr ’21).

Tiger was fast away from the 3 box and built on his early lead to win in 16.80. In doing so, he turned the tables on Abrakebabra Soo who he had been runner up to on his track debut. This was a decent run for Tiger who is still more than 6 months shy of his 2nd birthday.

He is the first pup from his litter to win and makes history in being the first Pestana pup to win at the Brandywell.

Aughris (Laughil Blake x Aslaug, Nov ’20) put up a determined display to claim victory in the second race for Harry Eastwood. Moderately away from trap 4, she bravely forged her way into the lead as the field rounded the first bend.

She ran on well up the home straight to win by 1.75 lengths from Rosehill Pete in 16.93. Aughris looks the type to improve with age and experience as this was only her third career start and she will not be 2 years old until November.

She is from a promising litter with three of her siblings already good winners including her brother Corbally Chubbs who has won 3 of his 7 races including a smart 24.35 at Romford which followed on from a classy 21.48 win in Dundalk.

Roco Loco (Pat C Sabbath x Drumcrow Blossom, Mar ’20) made it seventh time lucky when he claimed his first victory in the third race for Into The Woods Syndicate and trainer Joe Hurley.

This striking dark brindle hound has plenty of scope and he certainly catches the eye in the parade ring. Only moderately away from trap 2, Loco showed good pace to drive through on the inside at the first bend to take up the lead. He powered up the home straight, opening up an impressive 5.25 lengths on the rest of the field as he crossed the line in 16.85.

Brendan Millar’s Old Fort Mickmac (Crash x Old Fort Dakota, Oct ’20) made it 2 wins from 5 starts in the fourth race over 500 yards. He was well away from trap 5 and ran a smooth first & second bend on the outside of the early leader Bat Outta Hell. 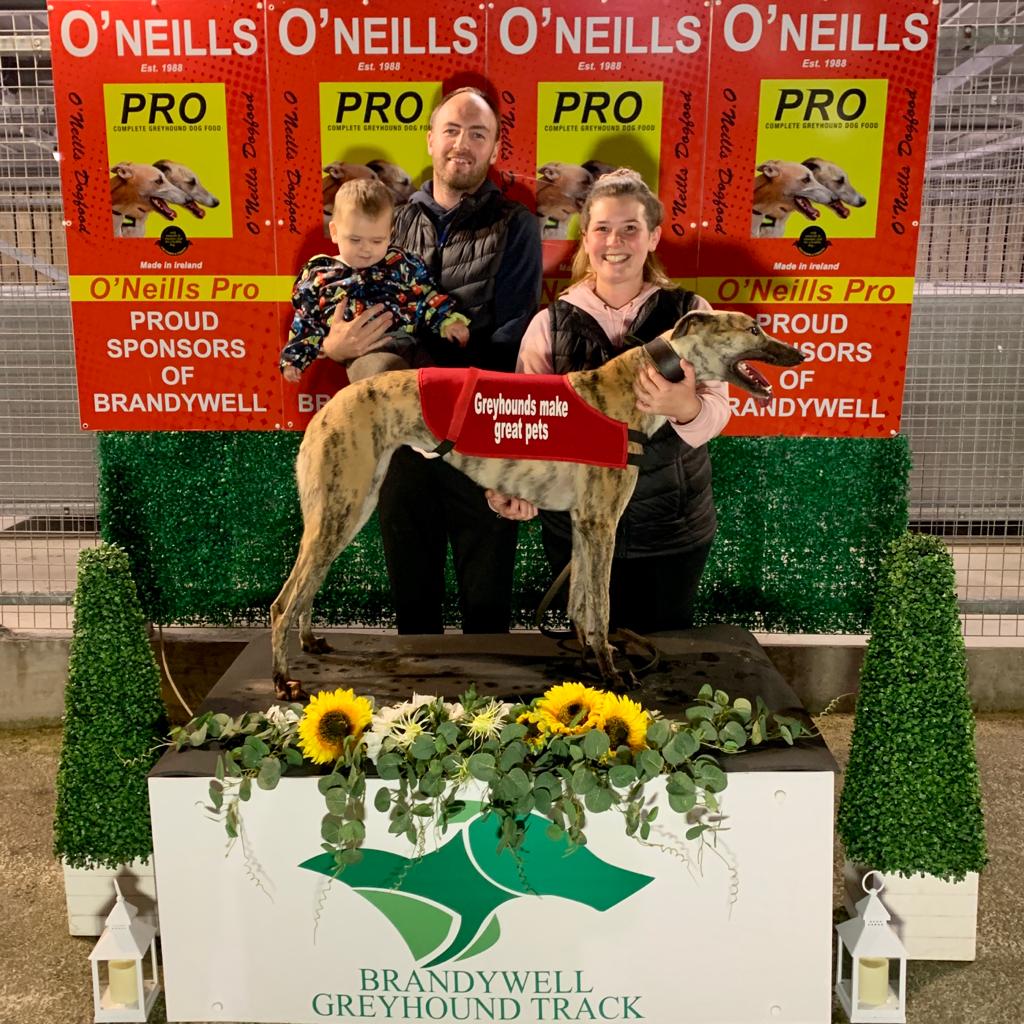 Race 7 Drumdoit Pippa who won the seventh race in 28.36 for Rebecca Porter. Alan Byrne and their son Matthew are also in photo.

Mickmac showed good pace down the back straight and took up the lead going into the third bend. From there he powered up the home straight to win by 4 lengths in 27.86. He looks like a suitable contender for the upcoming Brandywell Derby.

This ex Clonmel/Youghal hound appreciates a test of stamina and after taking an early lead from trap 4, he found himself in a real ding dong battle up the home straight with Titanic Socks who is also a strong finisher over the 525 yards. Jet repelled his challenger by 0.5 lengths to win in 29.43.

Beanos Snowflake (Dorotas Wildcat x Droopys Lagoon, Jun ’20) made it back to back wins with a faultless performance in the the sixth race for Colm Sweeney. She was fast away from trap 2 and ran out a 2.5 length winner in 28.03. She improved on her time on the clock from last week of 28.19 and she is certainly thriving on the competitiveness of racing.

The winner of the seventh race was another promising puppy. Drumdoit Pippa (Droopys Sydney x Our Pebbles, Feb ’21) for Rebecca Porter was moderately away from the 5 box and was in second place as she approached the first bend. 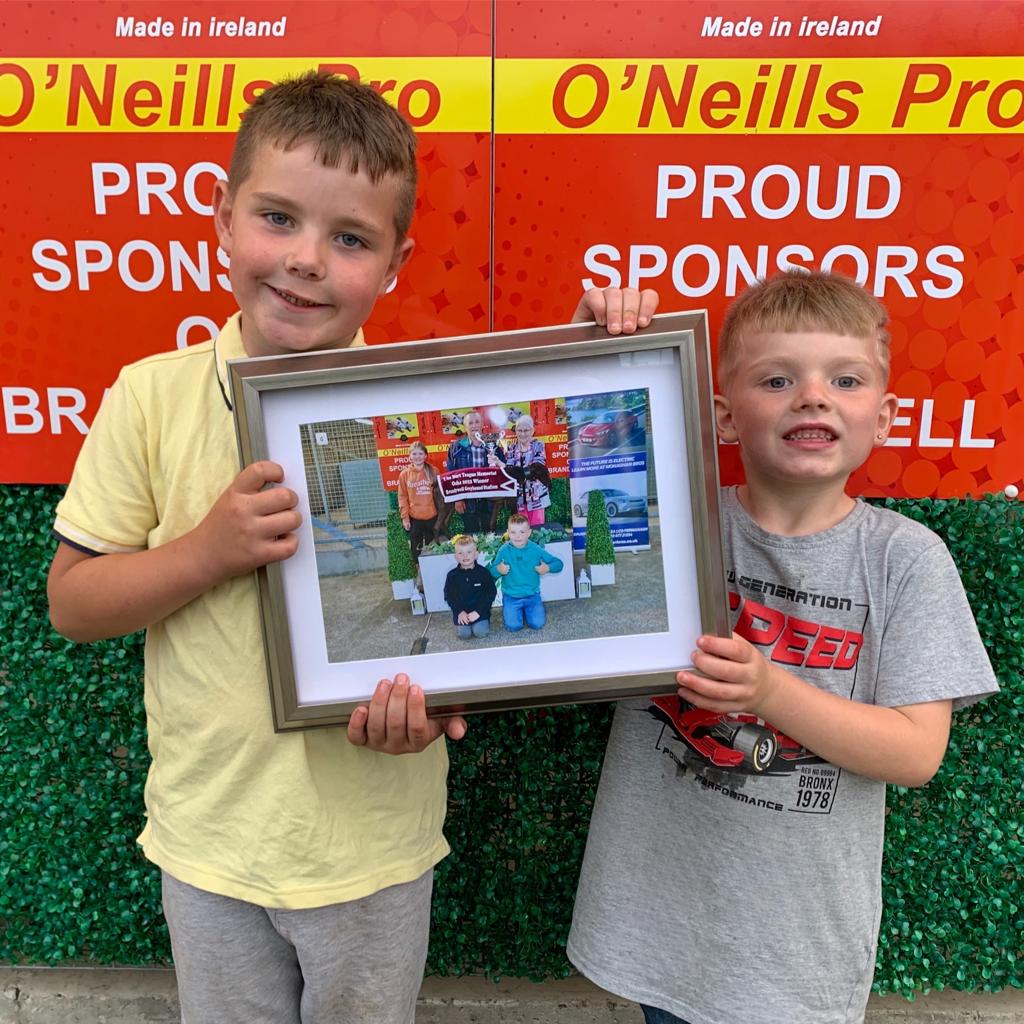 Ethan (left) & Riley with the framed photo they won on Oaks Final Night 2022.

She cleverly took advantage of space on the inside rail to maintain her position and was chasing down the early leader, Arrigle Bally, as they approached the third bend. She showed great track craft for a novice having her first race to overtake the leader on his outside and ran on well up the home straight to win by 0.75 lengths in 28.36. Pippa’s dam, Our Pebbles won her last career race over 575 yards in Lifford and it looks like that stamina has followed through to Pippa.

With 10 of Pebbles offspring already rated from 100 - 135 on Greyhound Data, it is likely that Pippa has a very bright future given her pedigree, young age and natural track craft.

Snipe Drum (Laughil Blake x Colorado April, Jun ’20) earned the accolade of headline act for this week after another terrific display of early pace which put the race beyond the reach of his competitors. He held off the fast finishing Pennylane Syd by 0.5 lengths in 16.67 which was the fastest time of the night.

This was his seventh win this year and he currently tops the Brandywell league table for dog with most wins at the circuit. 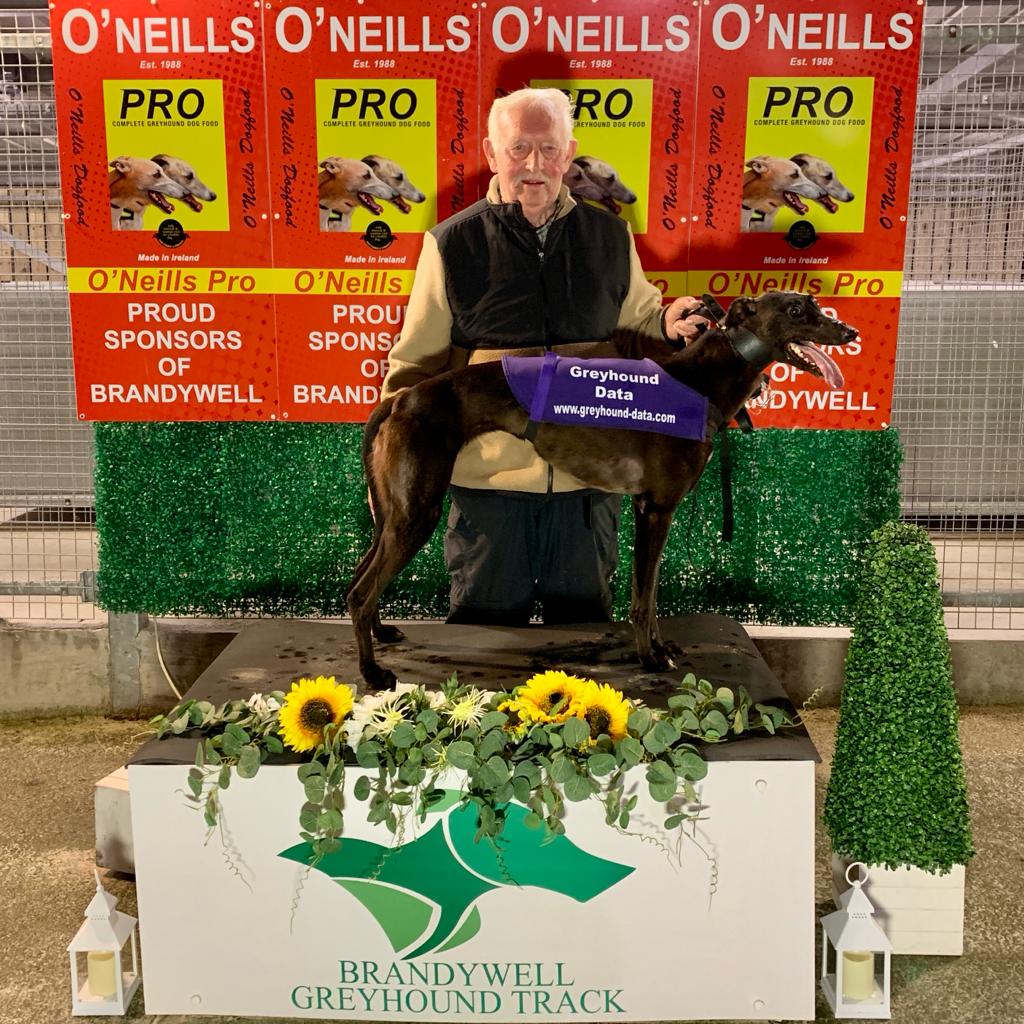 Race 6 Beanos Snowflake who won the sixth race in 28.03 with Colm Sweeney.

Owned by Vincent McGuinness and Juliet Aldridge, he has been a model of consistency throughout the year. He also won the bag of O’Neill’s dog food which was kindly sponsored by Andrew O’Neill.

We were fortunate to have enjoyed another great night’s racing with mild, dry weather. The nights are getting noticeably darker earlier now and the Brandywell patrons are no shrinking violets and will no doubt still be out in force over the Autumn and Winter.