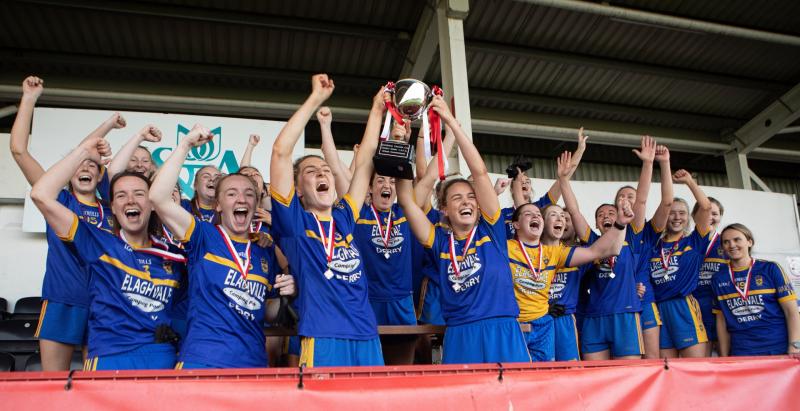 Steelstown Ladies are closing in on THREE Derry Championship titles in a row, which they will achieve if they defeat Ballymaguigan this Sunday.

Thomas Cusack’s all-conquering girls have run rampant over the county in recent years, league title after league title followed by a success at county level that they have only grown more protective of as the years have grown by.

Victory this weekend will make it three Derry titles in a row, a first for the club, and along with it, another shot at Ulster, which they so cruelly lost out on last year in the dying seconds of the final against Fermanagh champions Kinawley.

The Ladies made this year’s final by defeating Magherafelt in the semi-finals and for manager Thomas Cusack, he could not be prouder of a group who continuously push for more.

“It’s an achievement in itself and the girls are pushing on for it themselves,” he said. “Most of the players here have been here for the last three years and a few younger players have come in and are fighting for their position and getting in the starting team, and overall, it’s a strong enough squad.

There are a lot of experienced players; we have ones in their twenties and a couple up around their thirties so it brings that experience into the team.

That painful defeat to Kinawley in the Ulster final has only made them more determined to make things right in 2022, but to do that, they must first win Derry.

“That defeat was the driving force from the start of the year,” Thomas admitted. “We were beat in Ulster last year and we saw Kinawley lift up the trophy. The girls stood and watched that and since then they’ve driven themselves on for that. But all throughout the year the goal has been to win the Derry Championship, and after that you can go out and have a bit of fun.

Ballymaguigan will not be short on incentive to win this year’s final, having played second fiddle to Steelstown on one too many occasions. Having lost the Derry Championship final to Brain Ogs two years ago, they again fell short to their old rivals at the semi-final stage last year. League champions and current Derry champions Steelstown remain the favourites, but Ballymaguigan will be determined to change the record this Sunday. Cusack is well aware of their desire to win this time around.

“Ballymaguigan are a good team,” he acknowledged. “They have been dominant underage for the last four or five years and they were always going to come. We beat them in the semi-finals last year and narrowly beat them the year before in the final so they are a good, young and quick team who play football. Hopefully our experience can get us over the line.

“They’ll be chomping at the bit to beat us. They will not need any motivation after us beating them in the last two years. They will be up for it and we’ll be expecting a good tight game. We drew down there in the league earlier this year so there is very little between us.”

Champions are always there to be shot at, but for Cusack, even reaching a county final remains a special achievement, win or lose.

“Whatever happens, if we make it to a final, we go out and play our game and have a wee bit of a party after it,” he said. “It will be the same again this time, we’ll go out and play the game and hopefully if we win, we’ll be out to party then on Sunday night.”