Candystripes move to within one point of Shamrock Rovers 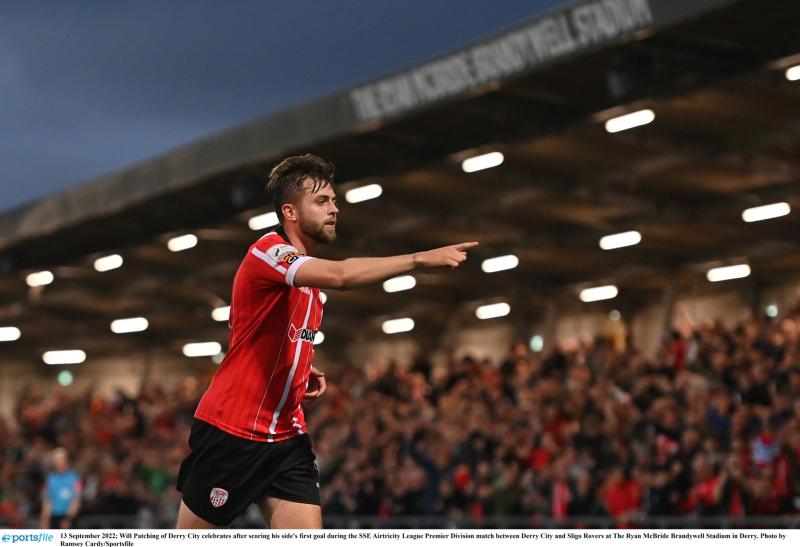 Will Patching celebrates his goal. Pic by Ramsey Cardy/ Sportsfile.

Will Patching's first half free kick was enough to secure another win for Derry City, who are now within one point of Shamrock Rovers at the top of the Premier Division.

It is now four successive league wins and four successive clean sheets for City, who were always in control against a Sligo side that failed to register a single shot on target in the 90 minutes.

City started brightly and should have scored after just nine minutes. Cameron McJannet raced past Lewis Banks brilliantly on the left wing and picked out the perfect cross for Ryan Graydon coming in at the back post, but the winger headed down into the ground from close range with the ball bouncing over the bar.

The Derry City fans did not have to wait long however as their team took the lead on 15 minutes. Will Patching was fouled by Frank Liivak on the edge of the penalty area, to the left of centre, and the midfielder picked himself up before curling a beautiful effort beyond the reach of Luke McNicholas into the top corner of the net. It was his 10th league goal of the season and first in 7 league games.

Jamie McGonigle was given a sight of goal early in the second half when Dummigan dispossessed Nando Pijnaker 10 yards from his own goal, but the striker lashed at the shot early and his left-footed effort sailed over.

A well-worked corner routine then almost caught Sligo out as Patching played the ball low into the area for Dufy to run onto but he didn’t catch his effort filly and McNicholas was able to gather at the second attempt. Moments later McGonigle volleyed just over as City began to really put pressure on the Sligo goal.

Substitute James Akintunde almost scored with his first touch, but he was denied by McNicholas who saved from close range.

Sligo were never out of it however and with substitute Max Mata was really making a difference, they came close to levelling on 78 minutes when Paddy Kirk raced down the left and his cross was almost turned into his own net by Mark Connolly, only for Maher to grab the ball before it crossed the line. A number of Sligo players claimed handball against the defender, but referee Rob Harvey was unmoved.

Max Mata had one final chance for Sligo as he latched onto a pass from Banks, but he sliced wide under pressure and that was it for the visitors.