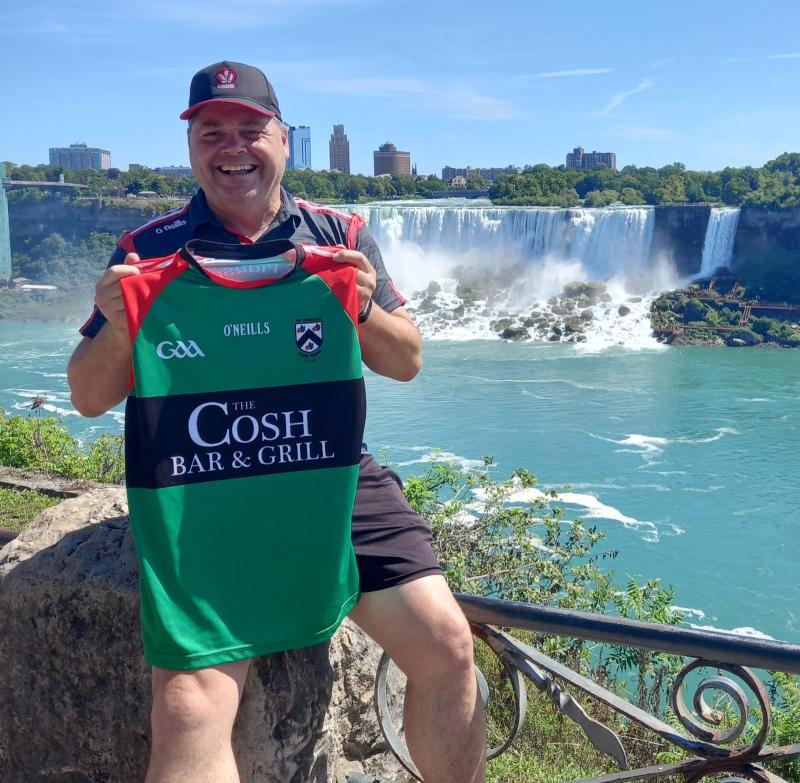 Alan Nash takes his Pearses jersey everywhere, even to the Niagara Falls.

Doire Trasna’s Alan Nash spent a gruelling 24 hours travelling back home from the inaugural Canadian National Championships in Toronto this past week, but instead of going to bed for two days, he was straight back on the pitch, doing what he loves.

The local referee has just written his own part in Canadian sporting history, as one of the visiting officials for the inaugural championships, which consisted of 40 teams and 900 players across the four codes of hurling, camogie, football and ladies football.

Featuring teams from Ottawa, Toronto, Montreal and Vancouver, the Championship was a first of its kind in Canada with Vancouver side JP Ryan’s cleaning up most of the big trophies.

It was an historic, emotional and an exciting occasion for everyone, especially for Alan, and a far cry from his usual assignments across Derry and Donegal.

He admits he had no idea just how popular the GAA was in Canada until he saw it for himself.

“I had no notion at all,” he said. “The first day I arrived I asked what the level was over there, and the response was ‘We’ll let you judge for yourself’. I ended up refereeing all the hurling.

"The first game I refereed was the senior semi-final between JP Ryans of Vancouver and Na Piarsaigh of Toronto. There was a point in it at half time and it was end to end stuff. I went over and talked to a spectator and said ‘That’s a fantastic standard’, and he said ‘I would like to think so, there are ex-county players in that team’.

“There was a Cork senior hurler from five years ago, and about our ex-Tipperary U21s playing so it was an unbelievable hurling standard, as good as you’d get anywhere in Ulster.” 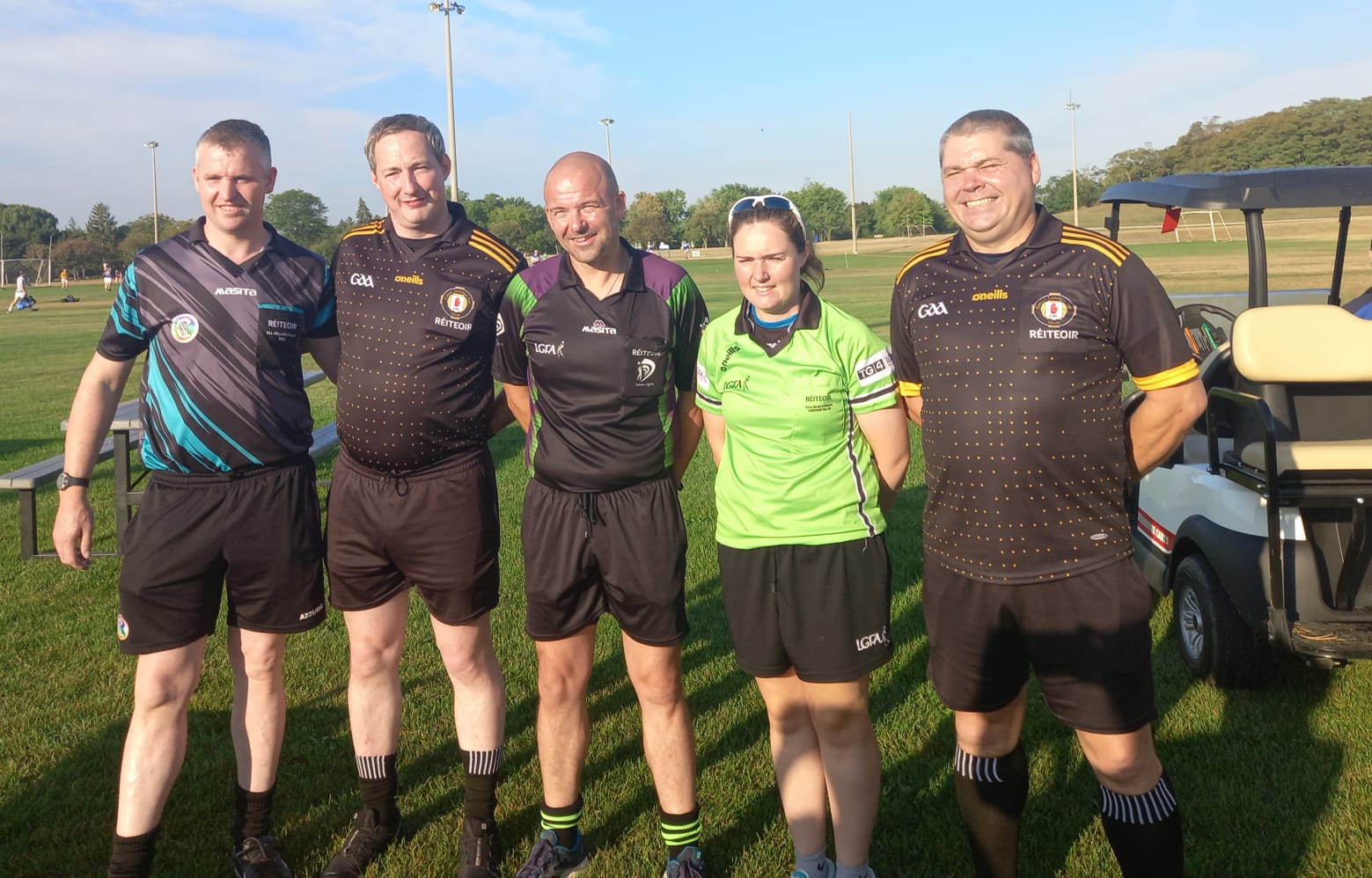 The visiting referees from Ireland at the Canadian Championships.

Not only was the standard high, but the enthusiasm from the spectators was second to none also, adding to the enjoyment of the competition.

“It was unreal,” Alan continued. “I wouldn’t say thousands, but there were hundreds around and there were actually Canadians from Toronto. It was played in a place called Centennial Park, which is basically a big council facility.

"It would be bigger than Owenbeg but basically the same idea, with soccer pitches, gaelic pitches and baseball. It was a massive venue. There were two pitches specifically for gaelic on it and they made two others so there were four pitches going constant for the four codes.

“One time I was doing the line in a game and there were these three guys, from an Asian background, and they were just enthralled by the football, and even hard shoulder or big tackle they were excited, they were really getting into the game.

"I wondered how long would they stay and they stayed for the whole game, they never left. They were just mesmerized by this game. I asked them did they understand it and they said ‘No, but it’s great fun’.”

Alan was one of three Ulster referees who took charge of the concluding stages of the inaugural Championships last weekend, taking charge of both the senior and intermediate hurling finals.

He was accompanied by Donegal’s Siobhan Coyle, who officiated the Junior Ladies’ final, while Sean Laverty of Antrim covered the senior men’s final.

It is the second time that Alan has gone international with the GAA, but a lot of yellow, red and black cards have passed since the officiated at the Intercontinental Youth Games in Philadelphia 10 years ago. A brief scare with the passport renewal aside, Alan can look at this trip as another fantastic experience doing what he loves best.

“I’ve got far more out of the GAA than the GAA got out of me,” he admitted. “I’ve been to Philadelphia, now I’ve been to Toronto. I’ve referred various county finals on Derry, I’ve refereed an Ulster U21 final and I’ve umpired with Barry Cassidy at All-Irelands.

"It’s an amazing adventure I’ve had compared to most people and the generosity from the GAA and the generosity out in Canada was fantastic. They really put on a show and really treated us well. They were appreciative of us coming, but at the end of the day, we’re the ones who got a holiday out of it.” 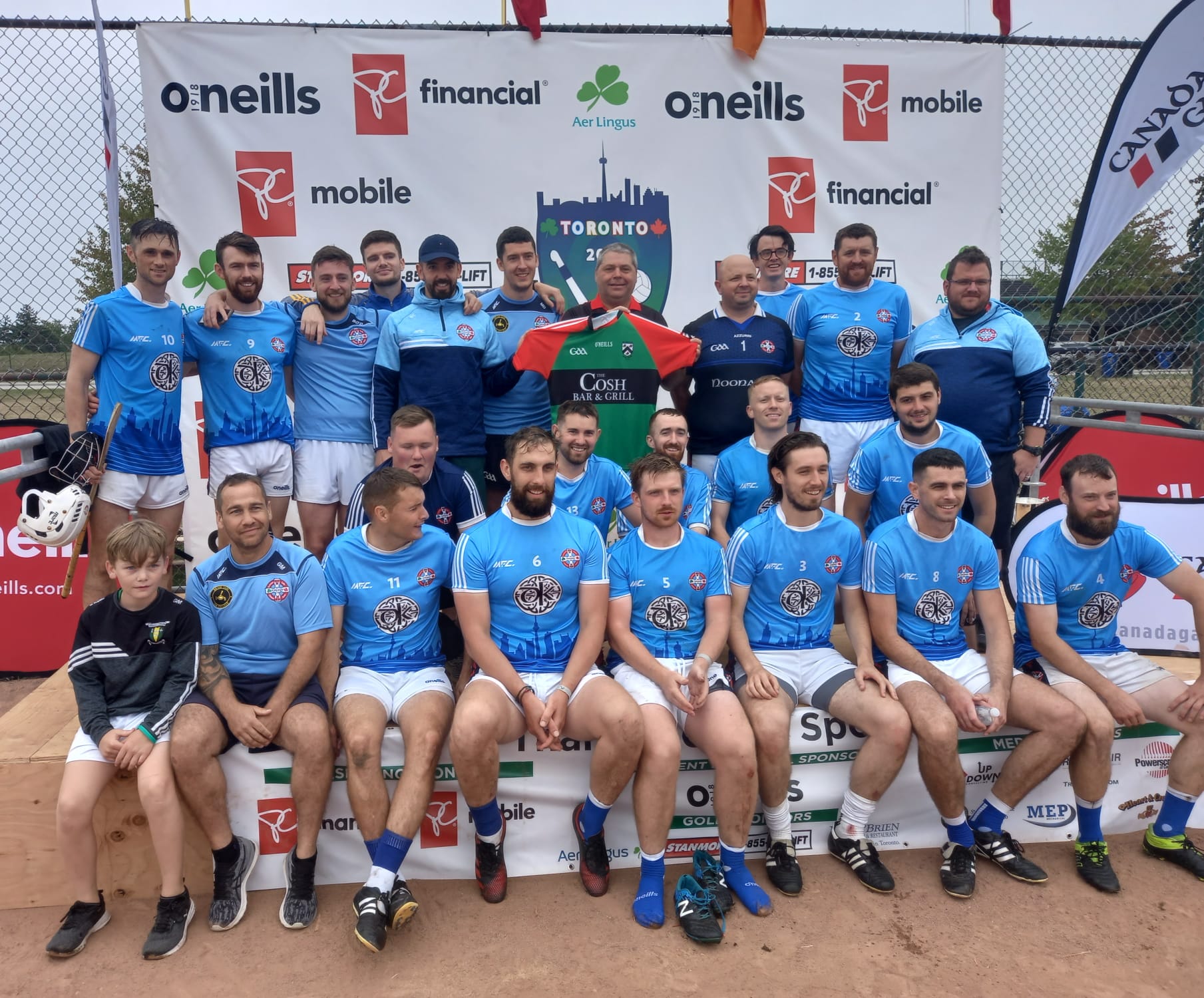 Alan is hopeful that the Canadian hosts can now attend the World Games in Owenbeg next year, but until then he is back doing his thing on local GAA pitches, even opting to go straight out and officiate Coleraine and Ballerin in the U15 hurling Championships just hours after arriving home. Who needs sleep, especially after the week he has just had?

“It was unbelievable. It was the trip of a lifetime and it gave me a lifetime of memories. I’ve volunteered my services for next year already,” he laughed.