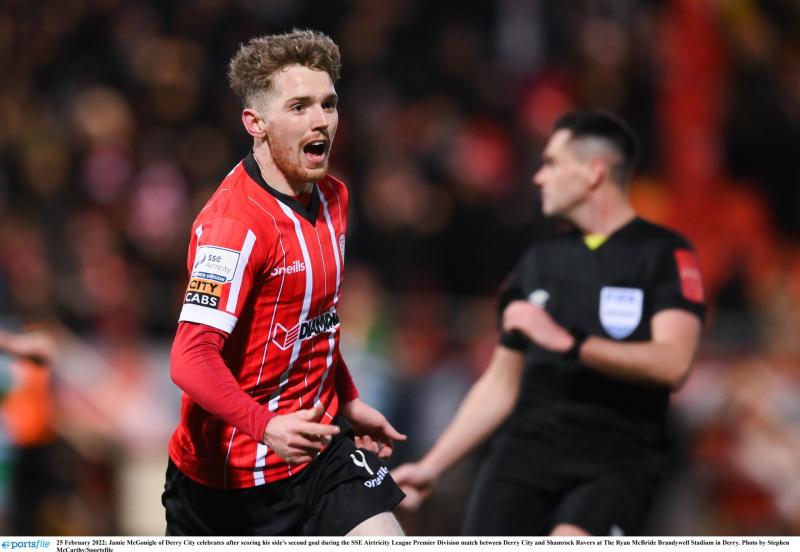 Jamie McGonigle is closing in on 50 appearances for Derry City.

Ruaidhri Higgins has backed Jamie McGonigle to rediscover his goal-scoring form as the Derry City striker approaches his 50th appearance for the club.

McGonigle, with 11 goals in all competitions, remains the club’s top goal scorer this season, but is in the middle of a tough spell having failed to score in his last 10 league appearances. The former Crusaders striker started the season fantastically well, becoming the first City forward to score in five league games in succession since Alex Krstic in 1986, with the club extending his contract until the end of the 2025 season shortly afterwards. In April, he also became the first Derry City player to be named the Soccer Writers’ ‘Player of the Month’ award in 9 years.

McGonigle has 19 goals and 8 assists in 49 appearances at the club, and Higgins remains in absolutely no doubt that the striker will shake off the most difficult stage of his senior career so far.

“I think he looked really sharp when he came on the other night (against UCD),” he stated. “He had two or three really good efforts and he looked sharp and he looked stronger and he just needs one of them to drop for him and I’m sure he can go on another run between now and the end of the season. It’s important that we all keep working with him and helping him. There’s no doubting Jamie’s ability, he just needs something to drop for him and I’m sure he’ll kick on.”

McGonigle will be in contention to start against Bohemians tonight with the Candystripes hoping to maintain pressure on Shamrock Rovers at the top of the Premier Division. Managerless Bohs actually beat the champions 1-0 at Dalymount Park last week to pick up their first win in five league games.

“They have gone and beaten Shamrock Rovers so they’re going to come here with real confidence,” Higgins acknowledged. “It does happen. Unfortunately, that’s the way of the world; a manager can leave and you get an extra edge out of the players for whatever reason, so they’ll come up here full of confidence wanting to win the game. We know their threats, we know what they’re good at so we need to be prepared for it, and we will be hopefully.”

Higgins also paid tribute to Keith Long, who recently lost his job at Bohemians after eight years in charge at Dalymount Park. Long was the second-longest serving manager in the League of Ireland after Finn Harps’ Ollie Horgan.

“I think Keith did a brilliant job there,” he said. “It’s never nice to see people losing their jobs but he can be very proud. Bohs are definitely a better club now than when he started the job and you can see the crowds they’re bringing in.

“To be honest the first five or six years were difficult because he was losing his best players regularly, but that’s football. It’s tough and I think anyone that goes into management, apart from maybe Alex Ferguson who is one of the few all time that was never sacked – when you go into football management you know you’re know you’re going to be sacked.

“I’ll get sacked at some point I’m sure in my career. It will definitely happen. I hope not, but if you’re going by the statistics then it’s going to happen inevitably. Keith should be very proud of the way the club is now that he has left.”

Last week’s results may just have reignited a title race this season, but Higgins remains focused on his team’s results only.

“If I was offered this position at the start of the season with our injury problems and the squad depth at that time I would have taken it without doubt,” he explained. “It is well documented that we had a period in the idle of the season that didn’t go according to plan but I think we’ve recovered really well. We’ve won five and drawn be of the last ten so we’re I good form and hopefully we can continue that type of form between now and the end of the season.