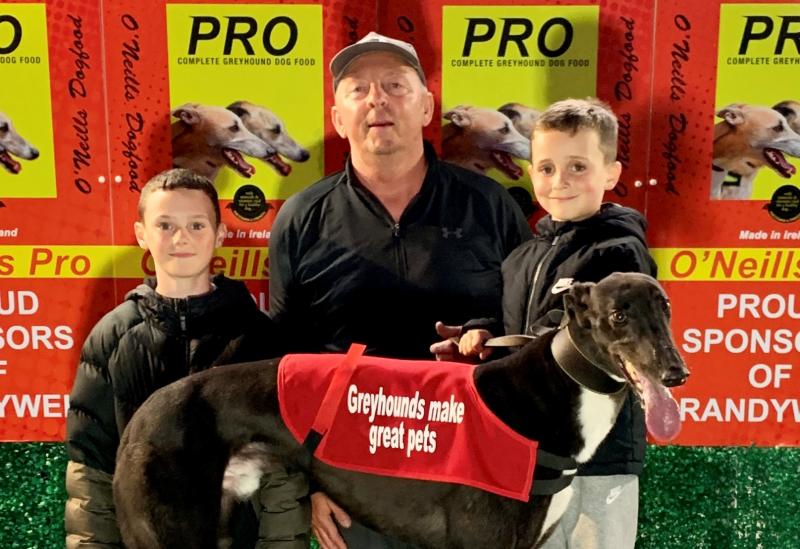 The feature events of Monday evening’s race programme at Brandywell were the semi-finals of the Daniel Canning Memorial 500.

It was a very special evening as the community of greyhound enthusiasts contributed generously towards the fundraiser set up for Odhran Edgar, a local lad who was a regular at the track throughout his life and who has recently been diagnosed with leukaemia. We wish Odhran all the very best as he undergoes his treatment and we hope to see him back on track very soon.

This is the Go Fund Me link should anyone wish to make a donation: https://gofund.me/9b15937c

Racing got underway with sprint action and Mindfull Lally (Droopys Roddick x Foulkscourt Lee, Dec ’20) made up for her slow start from trap 2 by making full use of the space on the inside rail that opened up as she approached the first bend. She ran on well to hold off the late challenge of Zoos Semenya by 0.5 lengths in 17.09 for owner Hugh Mullan.

Whilst Foulkscourt Lee is a proven dam, this was first pup from her Droopys Roddick litter to race and landing the win was particularly satisfying.

Alakazam (Ballymac Best x Manley Girl, Nov ’19) made a return to the track after a 2 month rest. All her career wins have been over this course and the sprint distance and she did her fastest ever time on Monday when winning the second race in 16.95 for owner Robert Montgomery.

Well away from trap 2, Alakazam showed good pace on the run to the first bend. She created an unassailable lead and won by 1.5 lengths from Jamboree. This was her first win in 2022 and hopefully there will be plenty more to come.

The first semi-final of the Daniel Canning Memorial 500 was won by Longvale Bella (Good News x Prints Policy, Sept ’20) for Georgina Gibbons who landed the first half of an excellent double. Bella recorded 27.92 which was the fastest time over 500 yards on the night. 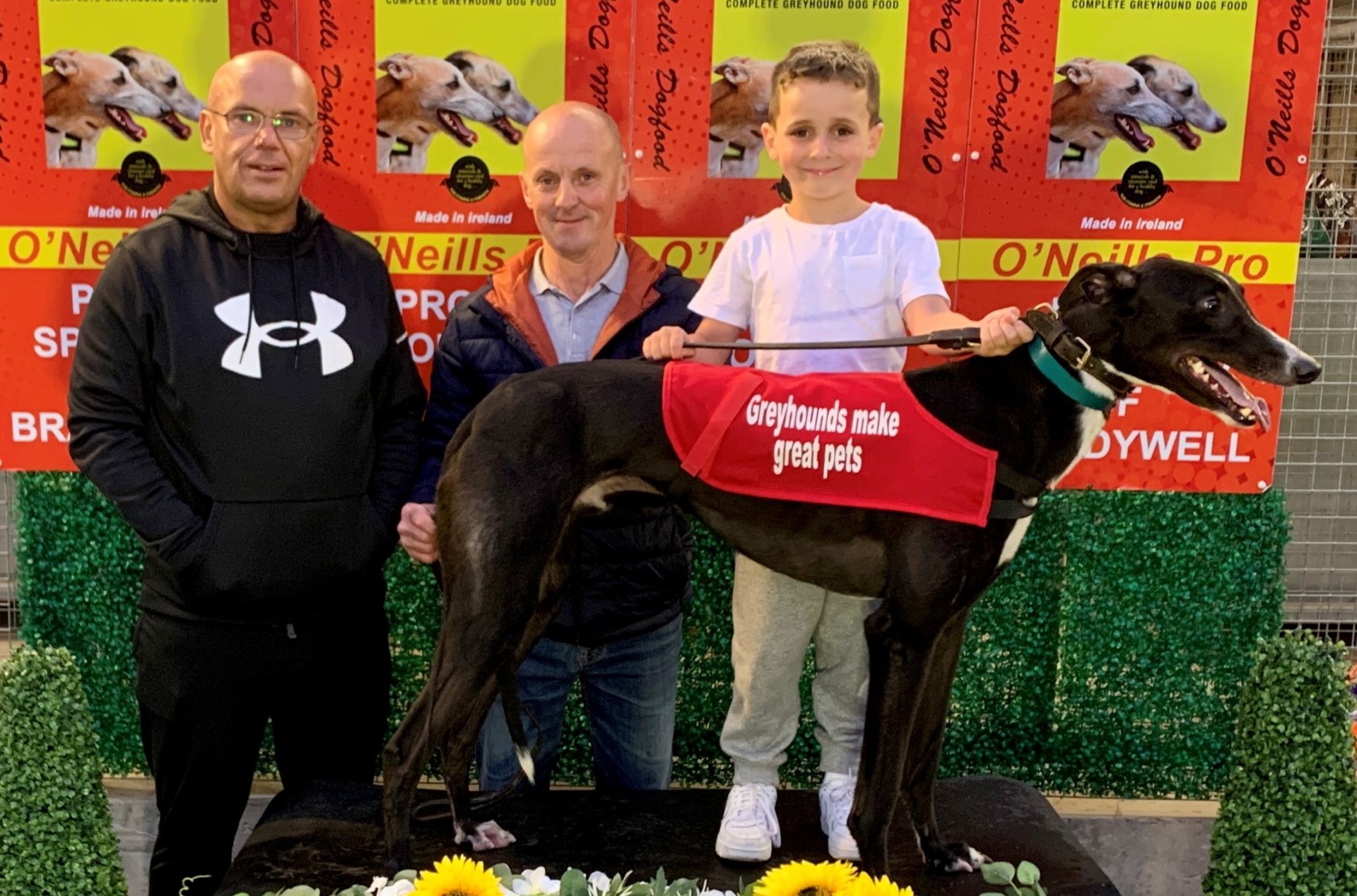 Temple Joe who won the fifth race in 28.18 with (from left to right) Danny McGilloway, William Mullan and Caleb Lafferty.

She trapped just ahead of the field and moved slightly middle from trap 1 on the run to the first bend. She held her leading position going around the bend despite some crowding and ran on well to win by 3.25 lengths from Very Ordinary with Coologue Paddy a further 1.25 lengths back in third. Bella has only had 7 career starts and won 3 of them. She is improving on every race and will be a leading fancy for the final.

When Shaun Eastwood bought Lakeside Model (Tyrur Big Mike x Newquay Delight, Feb ’19) just 3 days before the second semi-final of the Daniel Canning Memorial 500, he could not have dreamed for a better performance in his first race for his new family who have never owned a greyhound before. Fast away from trap 6, Model had enough early pace to clear the first bend in front and ran on well to win in a career best time of 28.00 by 4.5 lengths from Skirk Illusion with Derryveen Hill 3.5 lengths back in third.

Skirk Illusion won this event in 2021 and she is coming back to form at just the right time.

Temple Joe (Candlelight King x Lemon Jane, Jun ’20) is a striking looking 77 pounder. He is a dog that would catch the eye in a show ring and he was turned out in superb condition by owner/trainer William Mullan for the fifth race on the programme.

Only moderately away from trap 2, he navigated a path through the field at the first bend where crowding took place. He emerged from the second bend about 3 lengths clear and held that advantage right to the winning line where he stopped the clock in 28.18 with Ten By Thursday 3.75 lengths back in third. 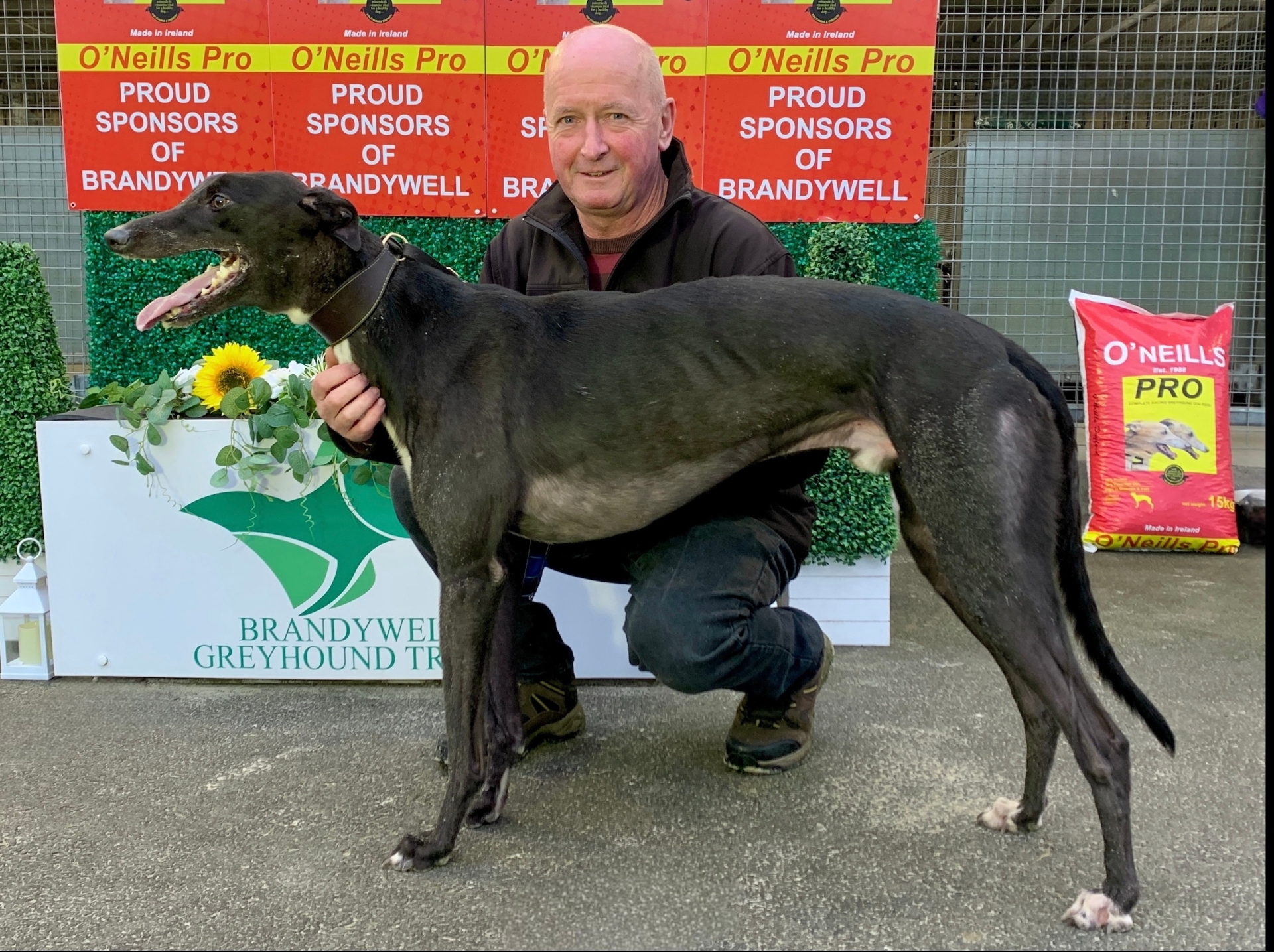 Pat Barrett with Coologue Paddy who has qualified for the final of the Daniel Canning Memorial 500.

The penny has certainly dropped with Joe as he has notched up impressive back to back wins over course and distance after 11 career starts without a win.

The bag of O’Neills dog food was a bonus prize in the sixth race and Do Little (Azza Azza Azza x Sober Princess, Sept ’19) rewarded his patient owner Kevin Conway and trainer Eddie Hurson with the second win of his career ahead of his third birthday in September.

Prior to his success on Monday he had just 1 win from 21 races and that was back in October 2021. Do Little trapped smartly from the 4 box and held a narrow advantage going into the first bend. Thereafter he ran on well to an impressive 4.75 lengths victory in 28.24 which is a career best time for him.

The Greyhound Data Sprint was the seventh race on the programme. Milos Mischief (Droopys Nidge x Roxy Music, Sept ’20) showed very good pace going into the first bend to take up a lead of 3 lengths or so. Shrewd Sapphire rallied on well up the home straight but Milo held on for a short head victory in 17.13. That brings his tally to 2 wins from 4 starts for Charles Coyle and Raymond Lecky.

Georgina Gibbons completed the second half of her double with Pennylane Syd (Droopys Sydney x Pennylane Missy, Dec ’19) who won his sprint in 16.66 which was the fastest time of the night. He ran a terrific first and second bend to and ran on strongly up the home straight to win by 5 lengths. Syd has now won 2 in a row with a tally of 6 wins from only 15 starts.

Daniel Canning Memorial 500 finalist, Lakeside Model, whose pet name is Pete, quickly settled into the family home with Shaun Eastwood, Kerrie McCay and 5 year old Colby. Shaun has been going to the Brandywell with his friend for a few months and has been enjoying watching the sport. 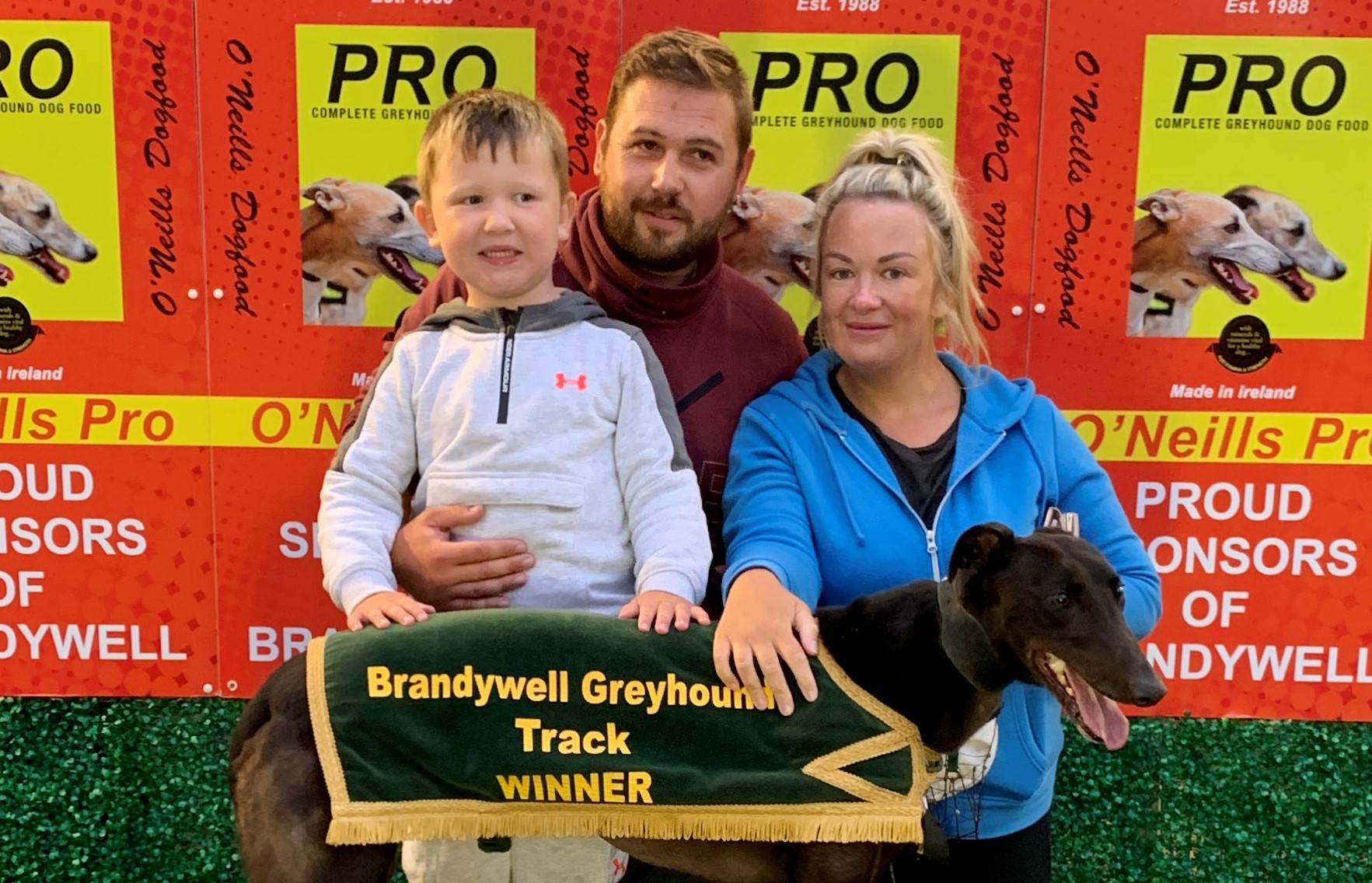 Lakeside Model who won the second semi-final of the Daniel Canning Memorial 500 in 28.00 with (from left to right) Colby McCay, Shaun Eastwood & Kerrie McCay.

He had seen Pete race each week and when the opportunity came up to purchase him, he jumped at it. Shaun has a network of friends who can advise on any training queries he may have. Pete is a much loved family pet already with the additional bonus of being a fast hound that absolutely loves the thrill of the chase and the family can now enjoy their nights out at the dogs together.

Shaun has the help of Colby to take Pete for walks and he has taken a great interest in the dog. Colby was absolutely delighted that his dog won on Monday and along with mum Kerrie they greeted Pete with hugs and kisses when he came off the track.

There was only one condition specified when Pete joined the family; he should sleep in his own bed and not on the sofa. However, greyhounds excel in their ability to manipulate their way onto the sofa so we imagine it will not be long before we see photos of Pete stretched out on the sofa with the family relegated to sitting elsewhere.