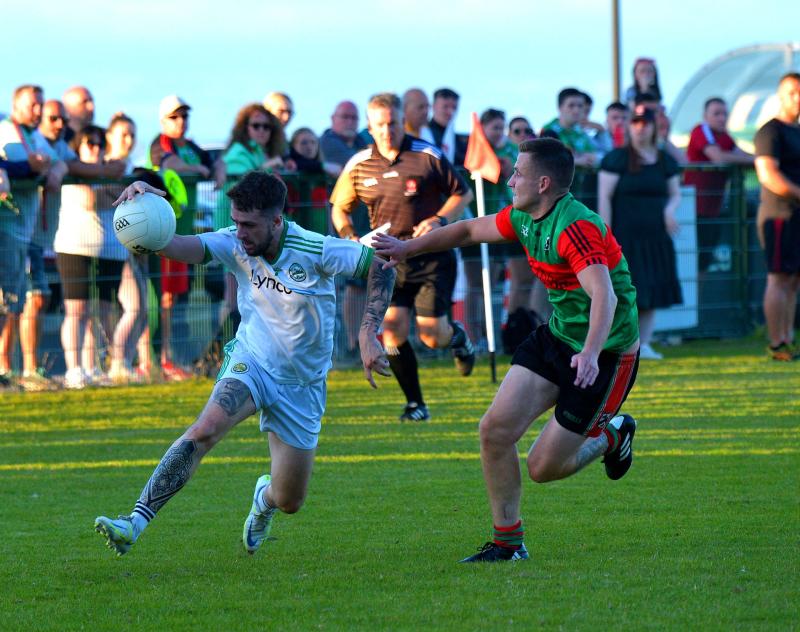 A second half red card for Shane Lyttle cost Doire Trasna dearly on Thursday past as they fell to a narrow and agonising defeat at home to Craigbane.

With the game still very much within reach, and the home side really building momentum for the first time, the red card came as a shock and really put the brakes on Pearses, who had Craigbane on the ropes at that stage.

The home side protested referee Ciaran O’Connor’s decision completely and vehemently, but after taking advice from his linesman, the official produced a second yellow for Lyttle, leaving Craigbane with a man advantage at a crucial stage in the game.

That Pearses still managed to make a game of it in the closing stages is to their credit. At the end of a day when the high temperatures had people driving off for the beaches, the heat was energy-sapping, but the Trasna players pushed and pushed and pushed and in the end were just one goal away from a draw, with all the talk about that red card come the final whistle.

Craigbane ultimately took the points to make it two wins from two in the group stages, but they will not be happy with how close this game ended, considering they were in control for long spells in the game.

While the Pearses players gave their all and deserve praise for that, Craigbane had this game all sewn up and should never be in the position they were come the last few minutes when they had to scramble the ball away from their goalmouth on two occasions.

That would not have been the case had they been more ruthless in attack, and had they let Pearses back into it, they will have looked back on the opening 10 minute as a key period, as they missed chance after chance, chalking up three wides and an open net before they finally got off the mark. 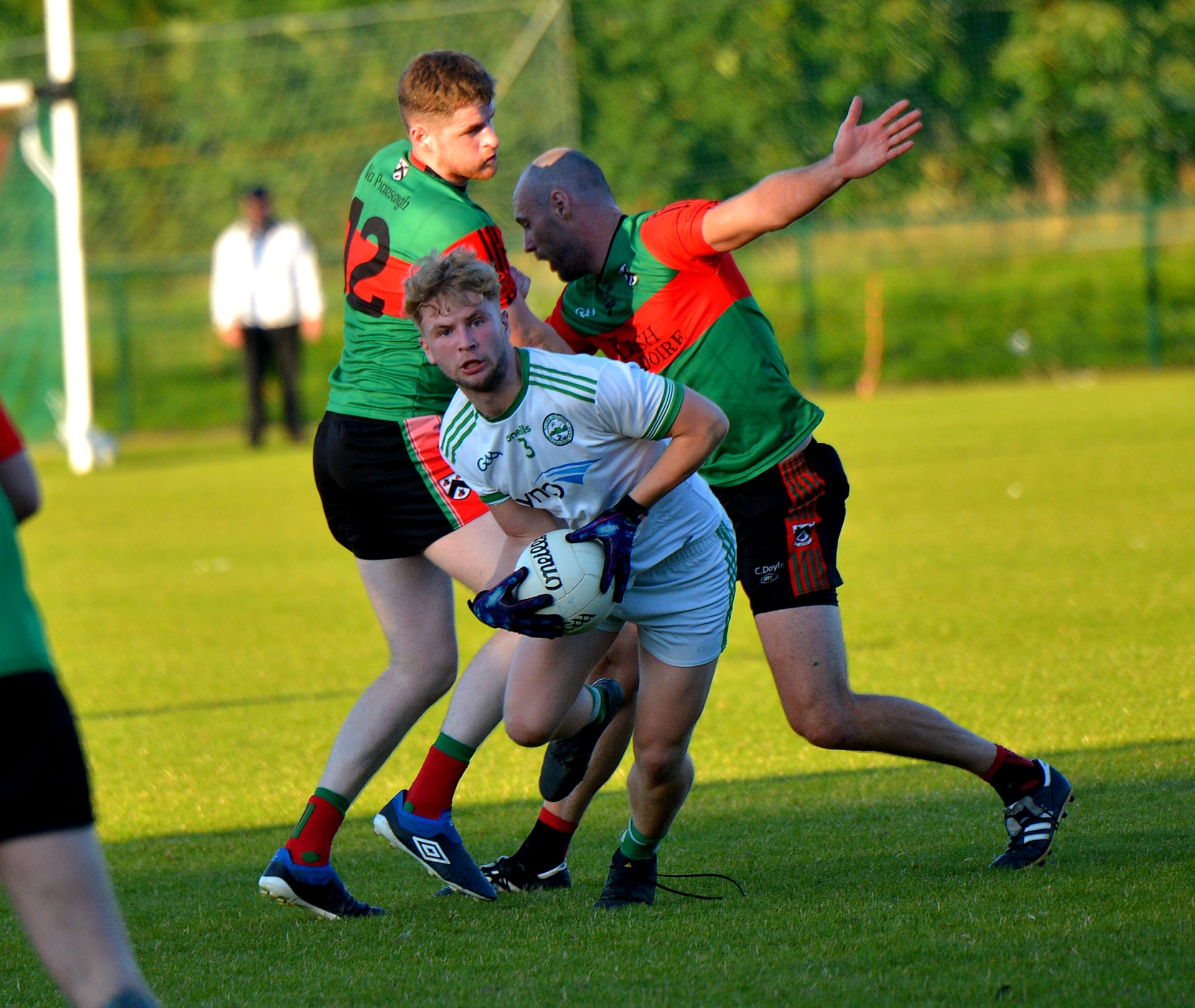 That early goal chance came when Trasna goalkeeper Gavin Bradley was caught in possession a long way from his goal, and Fergal Mortimer should have found the open net, but under pressure from a defender he shot wide of the target.

It took Craigbane five attempts to open the scoring with Mortimer scoring a free, but they were in a better position then the hosts, who took 14n minutes to have their first effort, with Conor McLaughlin shooting wide.

All of Craigbane’s spade work was ruined on 15 minutes when they fell behind by gifting Pearses a goal. Tom Casey’s shot dropped short into Paul Sharkey’s hands, but the goalkeeper dropped it and was challenged by Michael Philson, with the ball spilling across the goal to Pol Brown who had the simple task of sweeping the ball into the empty net.

Points from Mortimer and Cahir O’Kane soon brought it level at 1-0, 0-3, but the latter should have been a goal as Bradley played himself into trouble again. In his desperation to make amends, the goalkeeper dragged Brian Rainey to the ground; it could well have been a penalty but referee O’Connor waved play on and O’Kane shot over an empty goal.

It seemed that Craigbane were finally getting into their stride as the half came to an end as three successive scores, from Mortimer, Evan McMenamin and Jude Moore gave them a decent advantage going in at half time.

Doire Trasna started the second half positively, but they missed a chance to score when Tom Casey dropped a free short.

Points from Niall Feeney and Oisin McCloskey then extended Craigbane’s advantage to five points, with Pearses still to score their first point of the game.

That long overdue score finally came from Caelan O’Connell on 39 minutes, and no sooner than that happened, the home side added two more, from Michael Philson and Damien McGee as the momentum in the game began to change, with two points the difference.

Oisin McCloskey produce da timely score for Craigbane, but then came the met of controversy, with Lyttle’s red card and a great feeling of injustice from the home side, who felt that Mortimer should have been dismissed rather than their man.

The bubble looked to have burst completely and when Feeney, Moore and Lowry took it to a six-point game with just over 10 minutes remaining, this contest looked done and dusted. 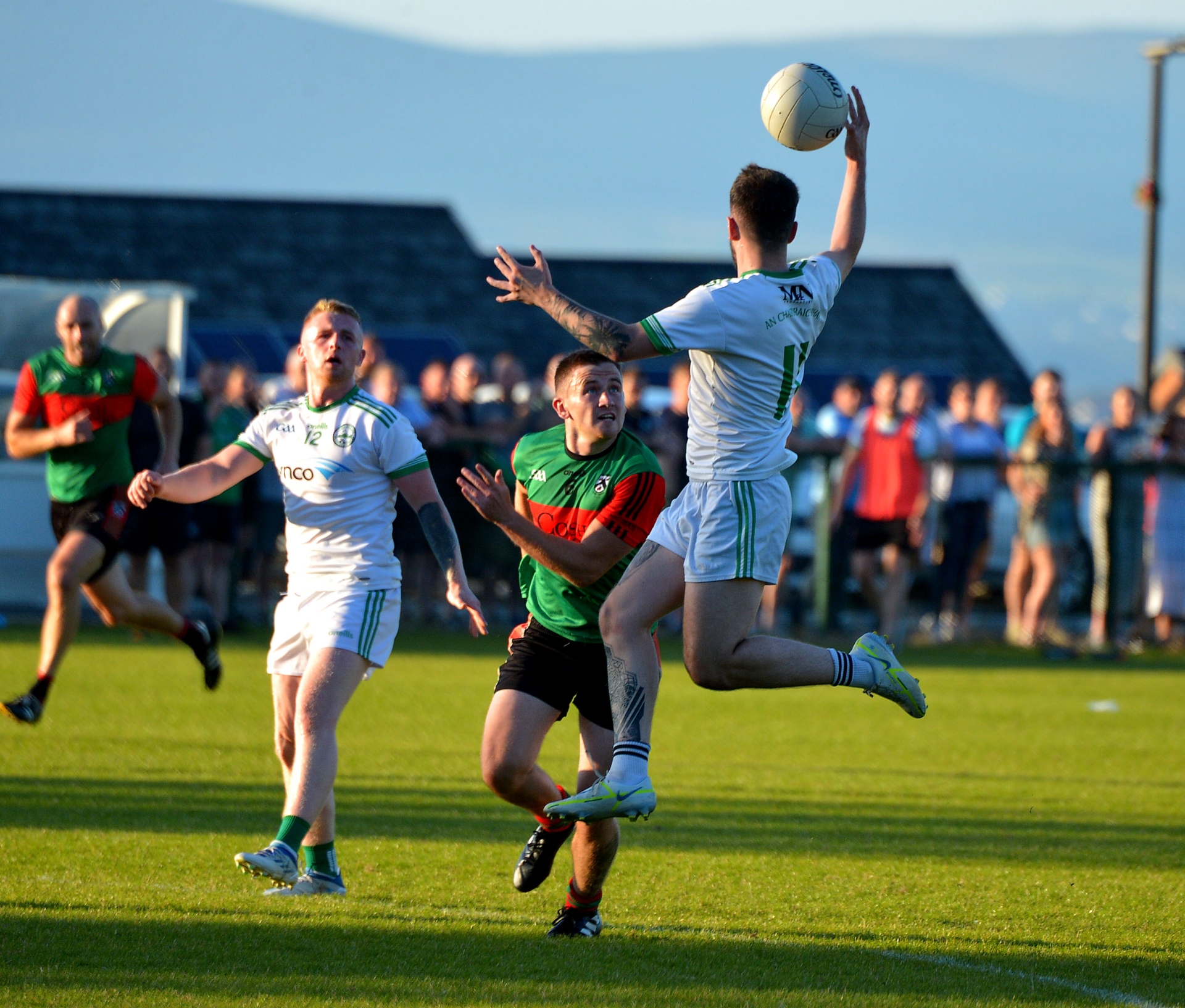 But the home side fought back brilliantly and it took a great block from a Craigbane defender to deny Ciaran McGowan a goal before Caolan Doyle got a deserved point for his efforts throughout. Colin Murray then scored his first point and Michael Philson got in on the act to leave it three points between the sides and Craigbane scrambling in the final few minutes.

There were two opportunities for Trasna to get something from this game and both times Murray launched the ball into a packed area, but each time Craigbane survived, with the final whistle bringing them more relief than anything else.