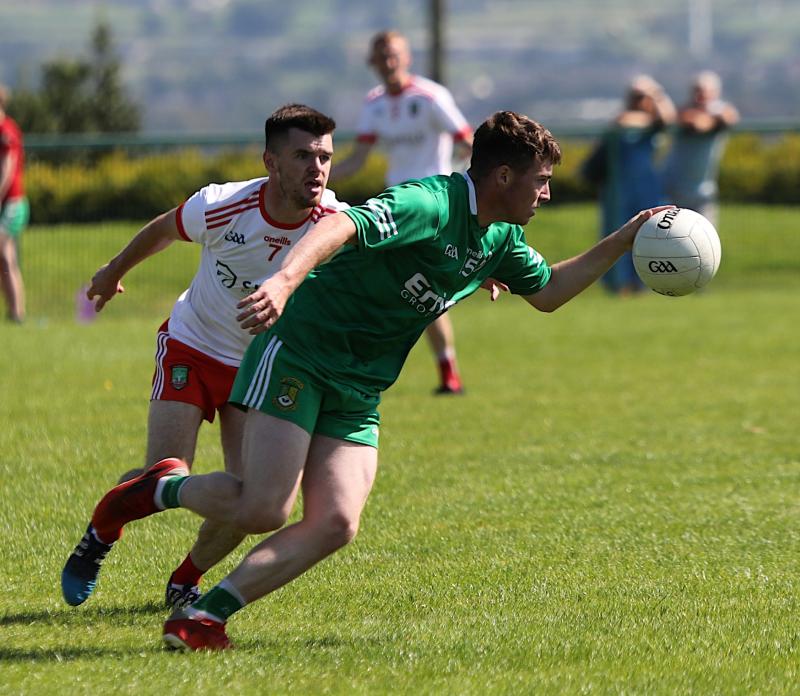 In the searing mid-afternoon temperatures, it was Drum who kept their cool to register their first points of this year's Premier Electric’s Derry Junior Football Championship at the expense of Creggan side Sean Dolan’s.

After recovering from a slow start, Dolan's fought back to level matters by the 27th minute, but a penalty on the cusp of the half-time interval swung the initiative back in the direction of the homeside.

As if this wasn’t a big enough hammer blow, the city men then imploded in the opening ten minutes of the second half and at one stage they found themselves down to twelve players.

Goalkeeper Ryan McCloskey and half forward Gearoid McDermott received black cards for dissent in the 37th and 40th minutes respectively, but what hurt them even harder was the dismissal of talisman Odhran McKane.

After picking up a yellow card in the 38th minute, McKane became embroiled in an off the ball tussle with his marker Niall Burke. Referee Damian Harkin deemed McKane to have dragged Burke to the turf and brandished McKane a red card which ended his afternoon.

It was a contest that hung in the balance to the latter stages but with Dolans unable to keep their emotions under wraps, they continue to be the architects of their own downfall.

While frustration was the over bearing emotion in the away dugout, Drum manager Rossa McManus wore a smile as wide as the beaming summer sun a few metres away.

After being blown away by Glack in their opening fixture two weeks ago, few observers outside Gortnahey would have given his side a chance from claiming the two points on offer.

Moving the ball at pace from defence to attack, the Dolans full back line struggled to contain an inside trio of Dylan Newland, James McCartney and Caolan Hazlett.

Setting up camp in front of McCloskey in the Dolans goal meant that they were acres of space for Drum to exploit. Time and time again long early ball caused havoc for the Dolans rear guard and in Hazlett in particular, took full advantage.

The former All-Ireland minor winner from 2020 finished the day with an impressive tally of 1-8 with 1-4 coming from play.

Hazlett led a supporting cast where Gavin Hasson, Barry Hazlett, Padhraic Farren and Caolan McLaughlin all emptied the tank for the cause. 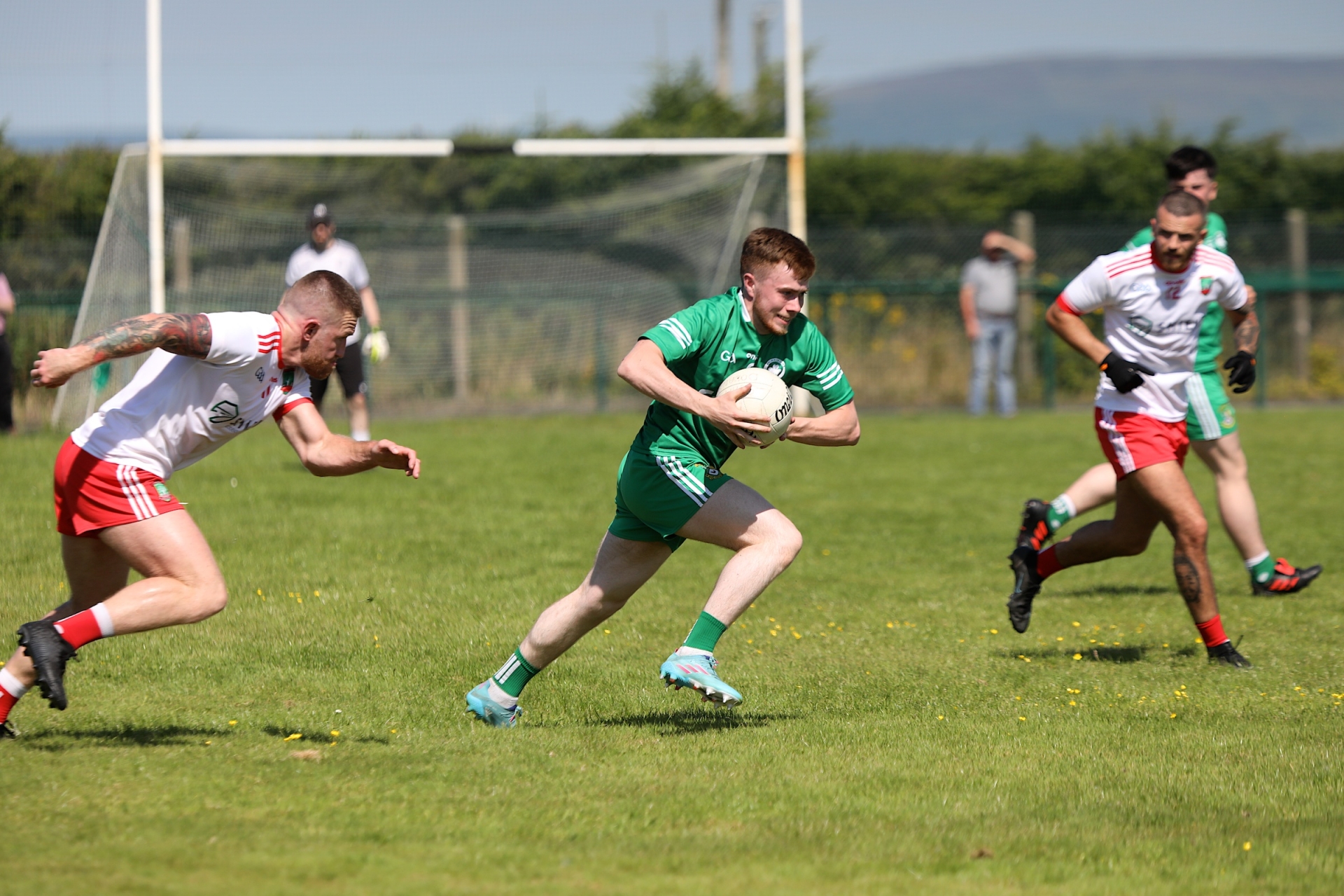 It was that quicker transition from defence to attack that proved to be the major difference between the sides.

After coming in off the back of a win over city rivals Doire Colmcille, Dolans were favourites to take the spoils from St Colm’s Park and set up a group decider with Glack next week. Bur a Drum side that for the second week running could only fill out seventeen names on their team sheet had other ideas.

Alex Moore won possession from the throw-in and quickly found Hazlett who opened the scoring after just twenty seconds.
Two minutes later and Farren doubled their advantage as Drum settled quickly into their stride.

Mark O’Kane opened Dolans account in the fifth minute but response was quick from Drum as another early delivery found Hazlett and he made the scoreboard read 0-3 to 0-1 after just six minutes.

The industrious Newland was inches from increasing Drum’s lead to three points but his effort was turned round the post by McCloskey. And from the resulting ‘45’ Hazlett took his tally to three as Drum went 0-4 to 0-1 ahead.

Dolans started to gain more possession in the middle of the park through Paul Melaugh and Paul Clifford and after forcing Francis Murphy into conceding a free. McKane pointed to cut the gap to two points after 13 minutes of play.

Despite the hot conditions both sides were serving up a good contest. While Dolans were enjoying the majority of possession, it was Drum greater efficiency rate that kept the home crowd the happier of the good-sized attendance, and in the 17th minute they were even happier.

Damien Brolly’s long ball was gathered by McCartney and he laid on another score for Hazlett as Drum re-established their three-point advantage.

It was all going to script for the home team but Dolans then started to turn their possession into scores as the game ticked into the final stages of the half.

On 22 minutes McKane converted a free and the same player also thought he converted one a minute later but the referee chose to overrule his umpire and award a wide.

Melaugh and O’Kane combined again for the latter to cut the arrears to just one point in the 25th minute before Melaugh himself got his name on the scoresheet with a deserved point in the 27th minute with McKane laying on an assist.

With Dolans well on top, half-time may have just been approaching at the wrong time for the city men but all changed in the final minute of the half. Another long ball from Moore rebounded off a post and into the arms of Hazlett who saw his effort at goal blocked by the foot of a Dolans defender. 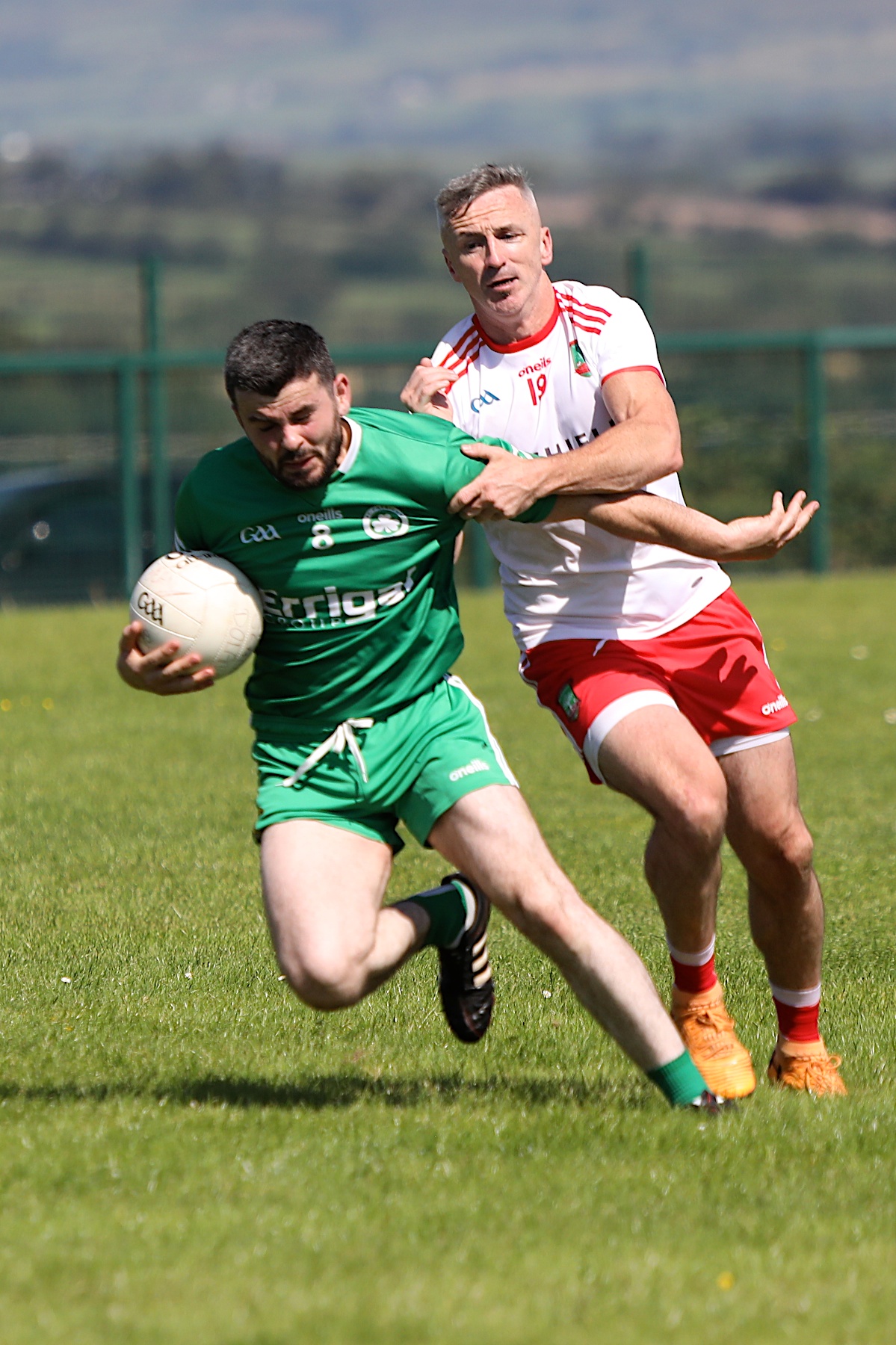 From the resulting penalty Barry Hazlett smashed the ball down the middle to give his side a slender three-point advantage at the break, 1-5 to 0-5.

Both sides made a bright start to the second half and with the score at 1-8 to 0-8, there was all to play for after 39 minutes.
Then came the Dolan meltdown as they lost three players in as many minutes.

Black cards to McCloskey and McDermott meant that they were to return to action, the loss of McKane was a body blow that they couldn’t recover from.

Resorting to long balls played into Drum’s hands as spare man Burke gathered up the breaks of any long ball played into the Drum square.

This allowed Drum to hit Dolans on the counter attack and deep into injury time the game was put to bed when Farren and Hasson combined to set up an easy close-range finish to the Dolans net to seal a deserving seven-point win.