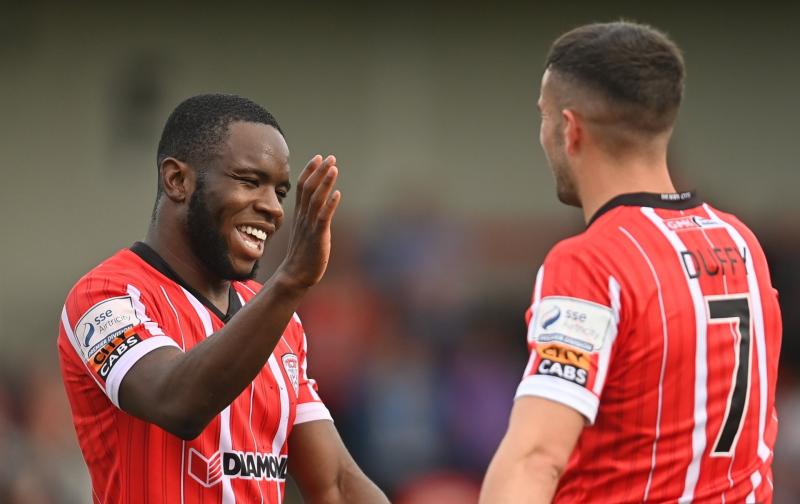 Ruaidhri Higgins admits that the form of James Akintunde has given him a good problem ahead of tonight's huge clash with Shamrock Rovers at the Brandywell.

The striker is currently in his best run of form since arriving at the club, with his goal against Dundalk last week his fourth in the last three games. But it is Akintunde's propensity to score big goals in the biggest games which has really caught the headlines this season, with the 26-year-old scoring against Bohemians, Dundalk (twice) and Finn Harps already this season.

Higgins has alternated between starting Akintunde and Jamie McGonigle in recent games, and he admits he has a difficult choice.

“Jamie had a brilliant start to the season, in the first half of the season, and he has actually looked extremely sharp this week in training. We have got food for thought but we'll base our selection around what we feel will be best for the different games."

Another option for the City boss is of course Michael Duffy, who has made a number of appearances from the substitutes' bench recently. Duffy is yet to start for Derry City since his return, but Higgins is not set to rush him back just yet.

"It would be ludicrous to do anything different," he insisted. "He's had a tough time but he's getting sharper, there's no doubt about that, and he's getting fitter and I think it's important how we integrate him back into the team."

While the late equaliser at Dundalk last week cost the Candystripes two points, City can close the gap between themselves and first place to just five points with a win against Shamrock Rovers tomorrow. After that, anything can happen.

"We just need to worry about ourselves and try and win the game," Higgins said.

"It's their's to lose without a shadow of a doubt. They are well in front and there's a comfortable gap there, but a win would make it interesting and give them something to think about, but they are by far and away the favourites to retain the league.

“They have got the biggest and deepest squad. It's great to see what they've done in Europe and I suppose it gives you that wee bit of envy, but it also shows what can be achieved."