Derry Greyhounds: Ardfert is a bright Spark for Oliver Canavan 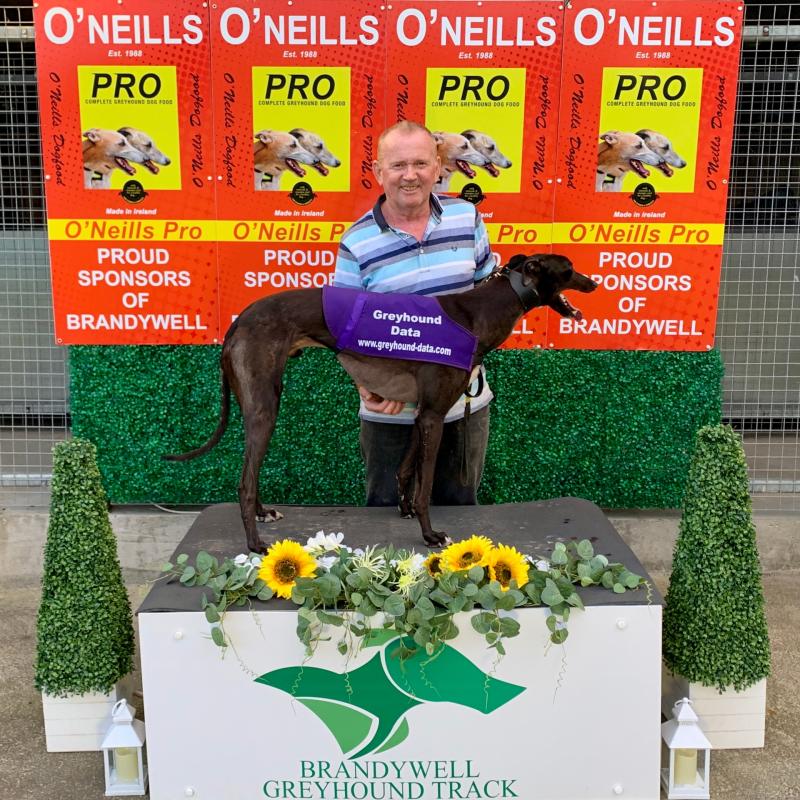 Ardfert Spark who won the sixth race in 27.72 with Oliver Canavan.

We had lovely weather for Monday night’s greyhound racing at Brandywell and the track was well watered, plated and in pristine condition for the canine athletes.

There was an 8 race programme which featured the two remaining first round heats of the Daniel Canning Memorial 500.

There was a thrilling finish to the first race over 300 yards and the camera could not separate the early leader, Neil McBride’s Tartan Red (Ballymac Best x Tartan Tumble, Jan ’21) from the fast finishing China Chas (Droopys Sydney x Mags Baby, Mar ’21) for Cathal Maguire. A dead heat was called as the clock was stopped in 16.84. Both Red and Chas were having their first career starts and both look to have exciting careers ahead.

The Greyhound Data Sprint was won by Joyces Jet (Jaytee Jet x Slaneyside Darby, Aug ’20) for Shea Cassidy. This dog has only recently arrived from Cork where he had competed 9 times without a win.

He has had one public qualifying trial over the Brandywell Sprint in 17.28 and showed his liking for the circuit to come from behind the early leader, Jumpstart Jesse, to record a decent time of 16.85 in his first race here.

He looks like he will appreciate the step up to 4 bend action. Worth noting that Jumpstart Jesse, just like last week, showed tremendous early pace from the boxes and this will be an asset to her throughout her career.

Midas Crystal (Greenwell Hulk x Chosen Wisely, Sept ’19) for owner Brian Thexton and trainer Austin Maxwell was drawn in trap 1 and was brave going into the first bend to hold her position. She emerged from the second bend with just over a length’s advantage which she held to the winning line clocking 17.03 and bringing her tally of wins to four. Three of those wins were in England and this was her first victory on the this side of the Irish Sea.

Races 4 and 5 saw the remaining first round heats of the Daniel Canning Memorial 500 played out. Quill Falcon (Droopys Jet x Galtymoore Moon, Jan ’19) for Shuaib Ali won the first of the two heats in 28.25 after determinedly overcoming some first and second bend crowding. Drawn trap 1, he was only moderately away and edged off the rail position slightly. 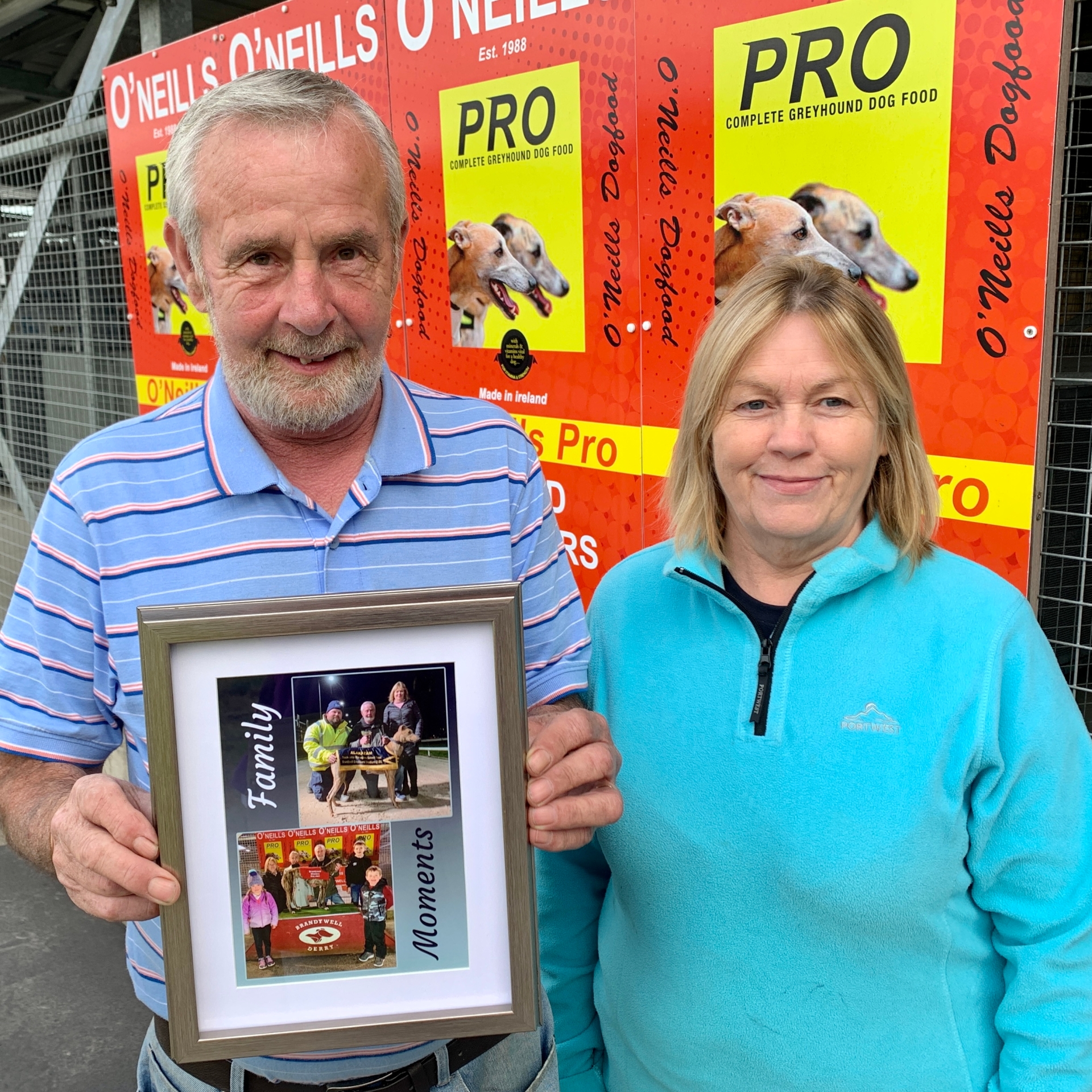 Kelsey won a framed photo in the Childrens Competition at Brandywell’s 90th Anniversary. She wasn’t at Brandywell on Monday to collect her prize but a very proud Grandad Robert and Grandmother Greta collected the prize on her behalf. Kelsey’s quiz answer was; “I love greyhounds because they are a great hobby for granda Robert”.

He may appreciate a more middle draw in the next round. Derryveen Hill ran around the outside of the whole field at the first and second bend and deservedly put herself into contention to be able to qualify for the next round 2.75 lengths behind the winner. Skirk Illusion took the third qualifying spot a further 3.25 lengths away and she did very well to navigate her path through the field after early crowding.

Boherna Vic (Ballymac Vic x Isle Of Capri, Sep ’19) for Charles Coyle and Hugh Harley was well away from trap 3 and ran on strongly after first bend crowding to win the last heat by 5 lengths in 28.36.

Midas Lassie was squeezed for room on the run to the first bend but ran on well to take the second qualifying spot with the early leader Great Flyer overcoming first bend crowding to take the last qualifying place for the semi-finals, just a length away in third. Much will depend on the trap draws in the semi-finals as to which dogs will secure those coveted places in the final on 22nd August.

Oliver Canavan’s Ardfert Spark (Kinloch Brae x Carmac Luna, Jul ’20) has been going from strength to strength and he recorded a fast 27.72 when landing the sixth race by an impressive 5.5 lengths. Moderately away from trap 4, he was squeezed for room on his inside on the run to the first bend but it did not deter him as he forged a clear path for himself. He has a terrific competitive attitude for racing and has won 4 of his last 5 races.

Temple Joe (Candlelight King x Lemon Jane, Jun ’20) has been unlucky in his 12 career starts after a series of slow starts and difficulty navigating a clear path through the field.

However he has been running well in defeat and drawing trap 1 was a sign his luck was in on Monday night. He trapped moderately, made good use of his inside berth and had enough early pace to take up a lead at the first bend.

He ran on very well to win in 27.96 for owner/trainer Willie Mullan with Illnotbethere running on well for second place. The latter is one for the notebooks as she should appreciate a step up to 525 yards. 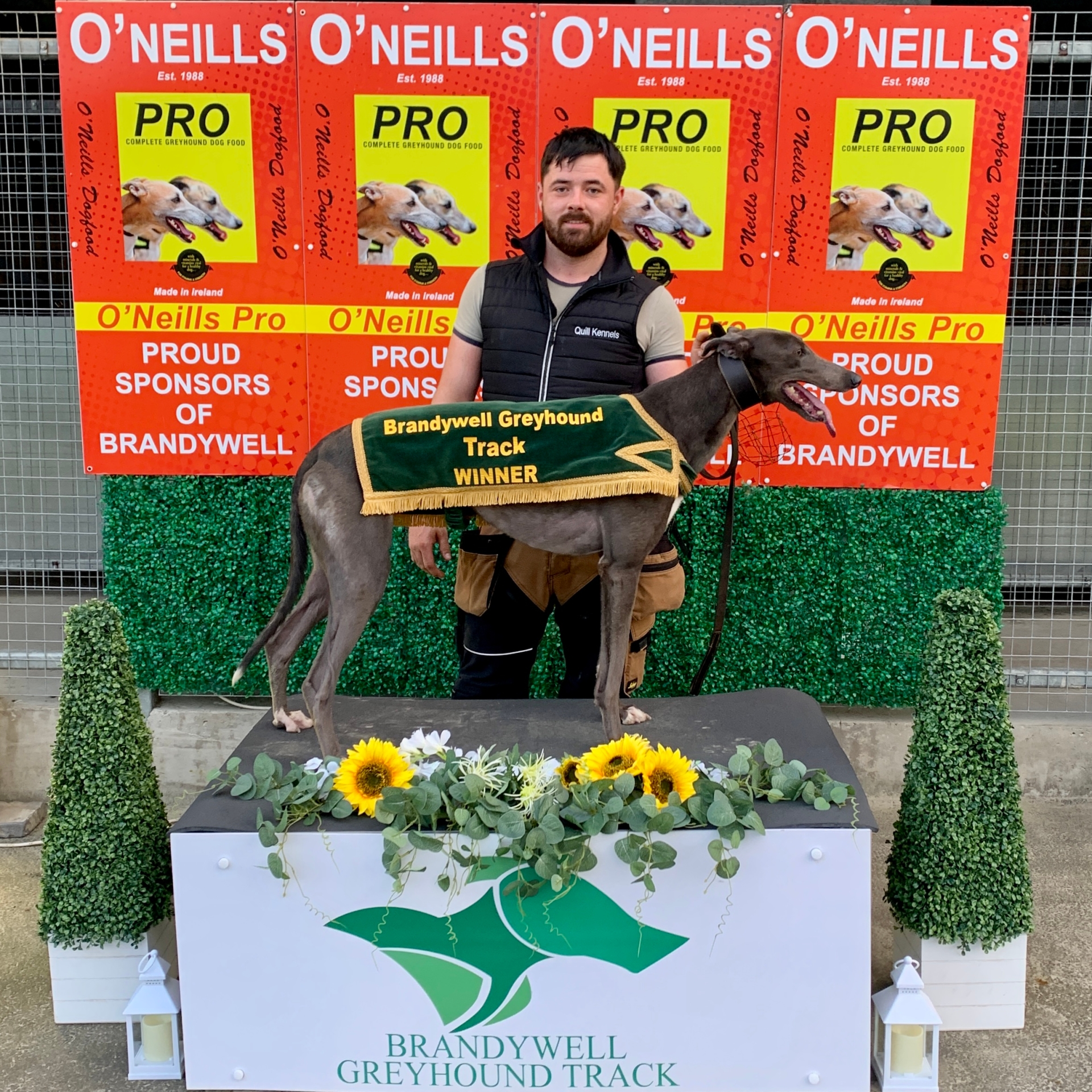 Quill Falcon who won the third heat of the Daniel Canning Memorial 500 in 28.25 with Lee Ferris.

As the lids lifted for the last race of the night, there were a few glances at the race card to see what had pinged ‘Pestana style’ from the traps. It was Paul McFaddan’s Cillians Jet (Jaytee Jet x Funny Pippa, Nov ’20) from trap 5 that had put the race beyond the reach of the others within a matter of strides and he recorded a very fast 16.61 when winning by 6 lengths. This pup is still improving with age and experience and has a very exciting future.

Manuone (Droopys Sydney x Shirocco Star, Sep ’19) has drawn trap 5 in this Classic final at Dundalk for owner Tony Maxwell and the competition carries a terrific €20,000 first prize. Local racegoers will have followed Manuone as he progressed from his first career win at Brandywell in a very fast sprint time of 16.67, through to winning the Rocking Chair Bar Open 500 in a flying 27.40 on Track Lotto Gala Night, before competing in this year’s Sprint Cup at Dundalk.

We wish all the finalists the very best of luck and are very proud to see a local dog reach this prestigious final.