Candystripes so close, yet so far 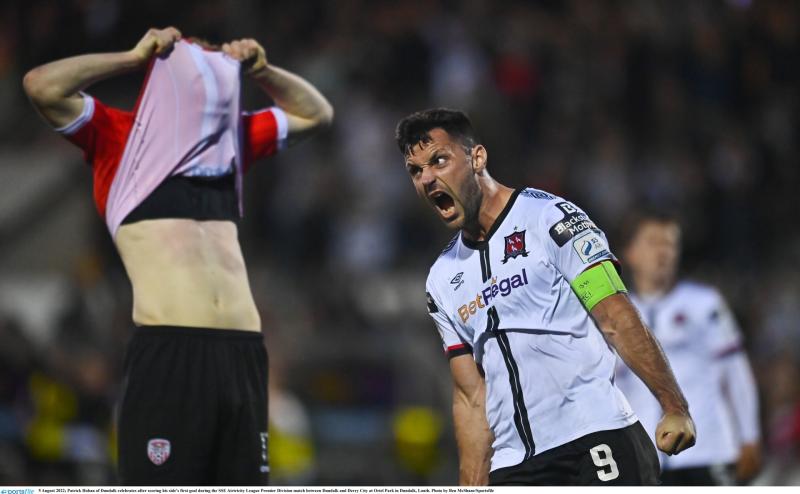 The striker struck three minutes into added time at the end of a tense game to deny City not only the three points, but also second place in the Premier Division.

Derry took the lead after just 11 minutes when Joe Thomson caught Greg Sloggett in possession deep in his own half and sent Akintunde away into the area. There was still a lot of work for the striker to do, but he turned inside Sam Bone onto his left foot, and he sent a shot low past Nathan Shepperd into the net to make it 1-0.

It should have been 2-0 Derry City on 35 minutes. Declan Glass did well to keep the ball in on the wing and he found Diallo inside. The midfielder looked to have lost control of the ball, but he worked his way past two players and slipped Joe Thomson in behind the Dundalk defence. Thomson ran through one on one with Shepperd, but took a bad touch at a vital moment, allowing the goalkeeper to smother the ball at his feet.

Dundalk came out strongly in the second half and defender Sam Bone almost shocked everyone when he took the ball unchallenged into the Derry City area, before drilling a shot just wide of the target.

Derry were so fortunate to survive when Ward played the ball across goal and it bounced around the penalty area before it fell to Benson, and the substitute would surely have scored had Sadou Diallo not stuck a leg out to take the power off the shot and it trickled kindly into Maher’s hands.

But Derry’s luck was not to last. Three minutes into added time Steven Bradley crossed into the area, and Pat Hoban sent a bullet header past Maher into the top corner to save his team a point.