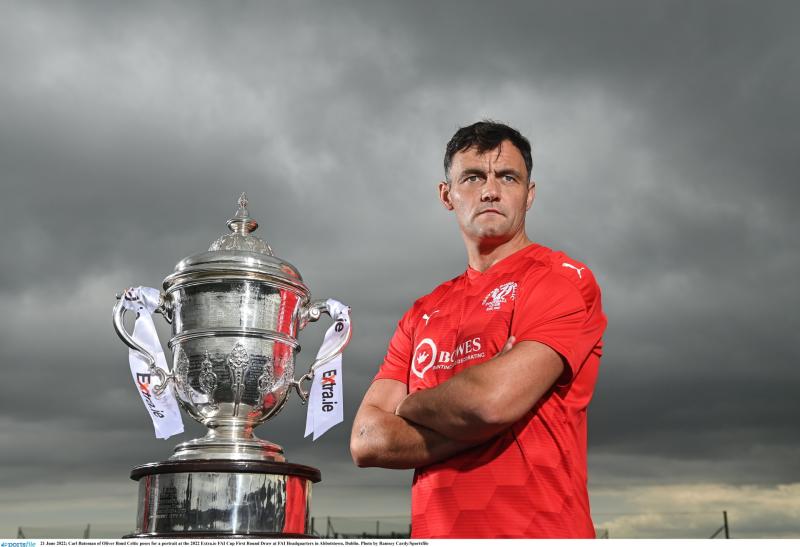 Oliver Bond are hoping for a giant-killing act at the Brandywell today.

Derry City fans of a certain vintage who still shudder when they hear the name ‘Ashtown Villa’, will not want to add Oliver Bond to that list this weekend.

Back in March 1991, non-league Villa stunned Irish football by coming to the Brandywell and winning 2-1 against a team featuring a number of players who had won the treble just two years earlier. To this day that remains arguably the greatest FAI Cup upset in history.

The Candystripes came close to reliving that infamy when, as FAI Cup holders, they could only draw 0-0 with Bluebell Celtic back in 2013 before squeezing through the replay 2-1. It is an experience, which Ruaidhri Higgins, who played in both games against Bluebell, will not want to repeat.

Leinster Senior League side Oliver Bond are hoping to just that list of giant killers today, and ahead of the biggest game in their five-year history, manager Eddie Keogh is struggling to contain the excitement amongst his players.

“It’s been five years. We started off in the lowest league in Dublin and have risen up. We have won 11 trophies in five years and won league trophies unbeaten every single year. From where we were to where we are now, it’s a Rocky story to be honest. It’s a Roy of The Rovers story and long may it go on.”

The opportunity to rub shoulders with one of the most famous teams in the country makes this a dream draw for the Dublin side, but the preparations have been far from ideal.

“We wanted one of the Dublin teams at home to be honest with you,” Keogh explained. “If we were going to go anywhere outside Dublin we would have said yeah, Derry or Cork. It’s very hard to be fair given that we haven’t played a competitive game since May.

“We’re just in pre-season so have just been playing pre-season friendlies. We did play two big games last week to prepare us, but the build up has been good. It’s been mixed with players being away and player going on holidays, so it’s been hard to get our full squads together. Dealing with a lot of reporters as well is not something that we’re used to but it’s something the lads would love to get used to.”

Whatever the outcome at the Brandywell this evening, Keogh and Oliver Bond will use this opportunity to take their club on a step further in their already incredible adventure.

“You just go up and embrace the moment,” he stated. “There’s no point in overthinking it. At the end of the day, it’s another game of football for us. We will be going up there under no pressure whatsoever, we just want to go up and compete.

“The lads are going to be on show for the whole of Ireland and will be testing themselves against one of the best teams in Ireland. As a club, we have been mentioned all over the news and the papers this week so it’s a good platform for us to be building on and to keep progressing as a club. Five years – it’s been a rollercoaster and long may it go in, and I think this game is only going to build the profile and build everything up for the club to progress even further.

“I’m proud; it’s an unbelievable achievement and it will be an unbelievable moment for us as a club just to go up and rub shoulders with them. Anything can happen, it’s football, stranger things have happened in the world. It’s eleven vs. eleven and you just never know in football.”