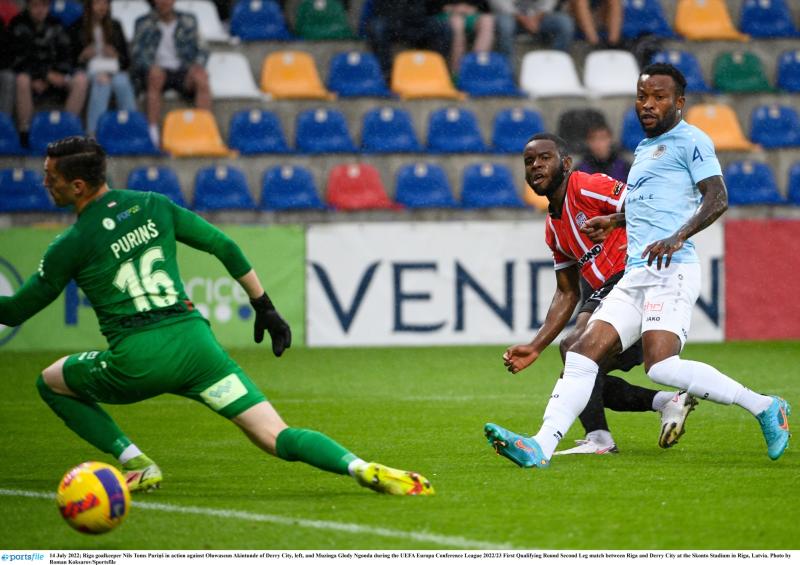 James Akintunde sends a brilliant chance wide of the target with the score at 0-0. Photo by Roman Koksarov/Sportsfile

Derry City's Europa Conference League campaign is over as they were beaten in the rain in Latvia.

After losing the first leg 2-0 at the Brandywell, chances of a comeback from Ruaidhri Higgins' team were slim, but they certainly had their chances before a double from Gabriel Ramos ended their hopes.

Derry started well and had two great chances to open the scoring in the opening 16 minutes. The visitors were showing no signs of nerves at all and they grew in encouragement after a decent start, with the first chance following on 14 minutes; Will Patching prodded a pass into the path of Danny Lafferty and the wing back ran into the Riga area before firing a shot into the side netting.

Yet the opportunity for James Akintunde just two minutes later was gilt-edged and should have given City the lead. The striker, starting in place of Jamie McGonigle, was picked out by Brandon Kavanagh, and Akintunde ran clear on goal with just the goalkeeper to beat, only to roll the ball wide of the target. It was a glorious opportunity for Derry City to get the goal they so desperately needed.

Somewhat inevitably, Derry City paid for this missed chances, as Riga scored with their first real attack of note in the game. It was a goal eerily similar to the first at the Brandywell a week earlier as Douglas Aurelio worked his way to the byline before pulling it across goal where Ramos arrived to fire past Brian Maher into the top corner to make it 1-0 on 34 minutes.

City had a chance to respond immediately when Riga goalkeeper Purins' poor pass out of his area presented Kavanagh with a chance, and it was a good effort from the midfielder but the ball landed on the roof of the net with the goalkeeper scrambling.

All of a sudden, the game looked very open and substitute Soisalo went through on goal only to be denied by Maher, before Filippov shot wide after being set up by Aurelio.

Derry had a mountain to climb in the second half, but they came close to getting on the scoresheet ten minutes in. Cameron Dummigan led City on the attack and he found the run of Lafferty who played it across goal to the unmarked Will Patching. City's talisman took a touch before curling the ball towards the top corner, but the upright denied him with Purins completely beaten.

There was a huge positive for the Candystripes despite the circumstances, and that came in the return of Michael Duffy, back after a long spell out with injury.

But Duffy was barely on the field two minutes when Riga doubled their lead in spectacular fashion. There was nothing Brain Maher could do as Ramos produced a sublime finish, running at the Derry defence before curling a beauty of a shot over the City goalkeeper and into the net with 13 minutes remaining.

That was that, with City now turning their attention to the Northwest derby with Finn Harps this Sunday.