Another trophy for brilliant Harps 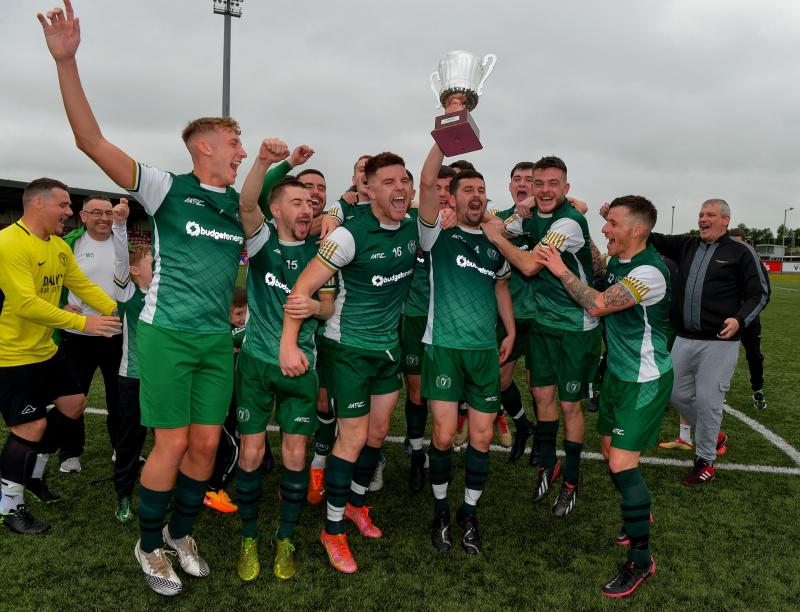 Foyle Harps’ domination of local football continues as they retained the Terry Kelly Cup at the Brandywell to make it two trebles in two seasons.

Phoenix made just the start they wanted as they shocked Harps with the opener just 10 minutes in. It was as simple a goal as they could have hoped to score with Aaron Rogan crossing from the right wing into the path of the unmarked Mo Crossan who powered a brilliant header past Connor Brown and into the net.

Phoenix were more than holding their own in the minutes following that goal but Harps are not a team which panics, and they pulled level within 15 minutes with a brilliant goal from Sean McCarron.

There seemed little danger when the former Derry City striker received the ball with his back to goal 25 yards out, but in one quick movement he had shifted it onto his right foot and drilled a low and powerful shot right into the bottom corner past the despairing dive of Darren Smyth.

Harps took the lead for the first time in the game on 56 minutes. Following a period of intense pressure, the disciplined Phoenix defence was beaten far too easily when McCallion’s corner was met by Ryan Doherty who side-footed his team into the lead from close range.

Luck went against Phoenix as Harps made it 3-1 on 72 minutes. Sean McCarron received the ball out wide and cut inside to shoot, and his effort took a huge deflection to take it beyond the reach of Darren Smyth for his second goal of the game.

Harps were flying now for the first time in the game, and they ensured another treble was theirs with the fourth goal on 77 minutes. Ryan Doherty shaped to shoot on the edge of the area, but he fooled everyone and instead slipped McCallion in on goal, and Harps’ top scorer made it look easy as he slid the ball beyond Smyth and into the net to make it 4-1.

Another soon followed as Phoenix collapsed; Smyth was unable to hold Benny McFadden’s free kick and McCallion was on it immediately, placing the ball into the net from a tight angle to make it 5-1 to end another great season on a high note for a dominant Harps team.

Harps have now won the D&D League title, the McAlinden Cup and the Terry Kelly Cup two seasons in succession and at the moment, they are absolutely untouchable in local football.