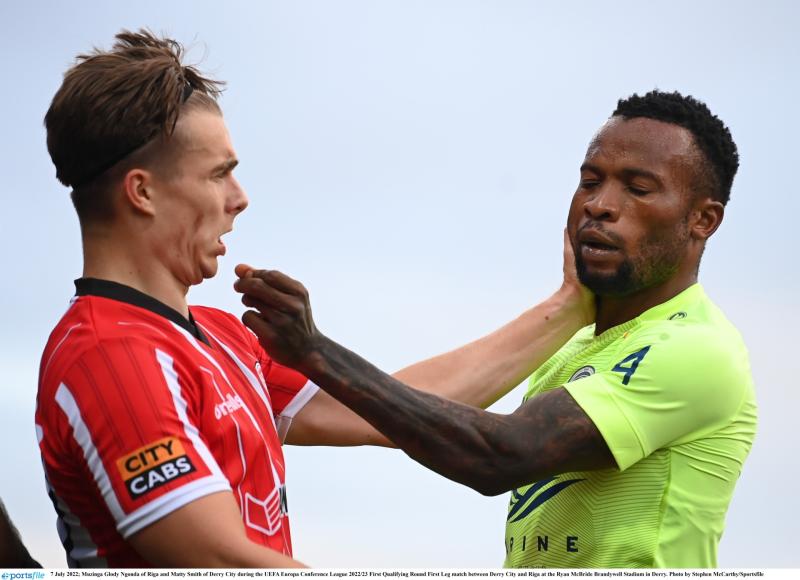 Derry City will have to come up with something special in Latvia next week after they were well beaten by Riga FC in a disappointing first leg of their Europa Conference League Qualifier at the Brandywell.

The Candystripes went into the game having returned to winning ways domestically in recent weeks, but they were found lacking against stronger opposition in the first European game played at the Brandywell in four years.

It was Riga who struck first with a goal to silence the Brandywell just before half time. A ball forward saw Oleksandr Filippov get in behind Shane McEleney, and the striker took it to the byline before lobbing a cross into the area where Gabriel Ramos met it on the volley, firing it past Brian Maher to make it 1-0.

It could have been 2-0 with 60 seconds as Riga broke forward again, and this time it was Filippov who came close himself, twisting and turning amidst a sea of red shirts before curling the ball just past Maher’s upright.

Derry had a great chance to equalise within two minutes of the restart when Cameron McJannet whipped in a superb ball which invited a header from Smith, but the Derry forward missed the ball completely and the chance was gone.

The game took a massive turn against Derry with two huge blows in the space of three minutes midway through the second half.

Smith, having won his team a throw in deep in the Riga half, got needlessly involved with Glody Ngonda and it was enough for referee Vilhjalmur Thorarinsson to show a straight red card to the City forward.

Smith had barely made the changing rooms before Riga made it 2-0. The impressive Aurelio breezed past Shane McEleney to the byline and pulled the ball back for Filippov, who slid the ball past Maher and into the corner of the net.

It could have been even worse for Derry City as substitute Yurchenko hit the crossbar in the last few seconds of the game.