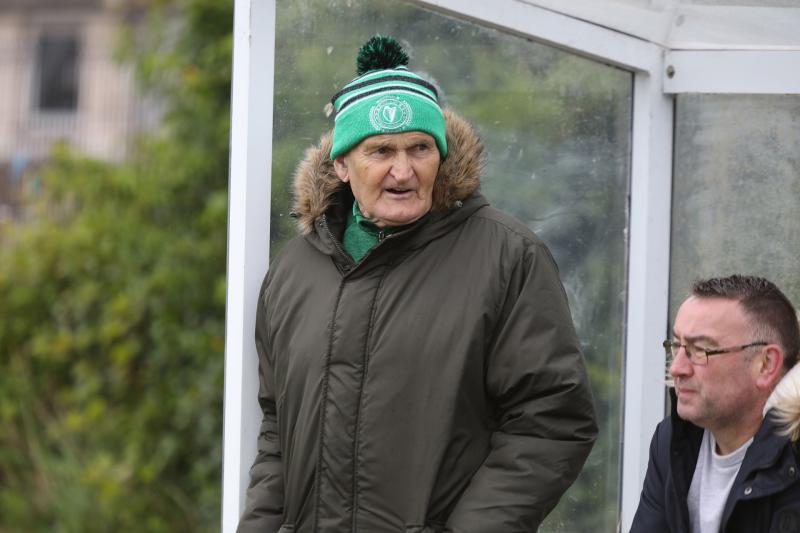 The Godfather of local football, Gerry ‘Doc’ Doherty celebrates his 80th birthday today, surrounded by friends and family plus past and current players from his beloved Foyle Harps.

After a lifetime in the sport he loves, there is still no sign of Gerry slowing down, and whether it is giving advice, dishing out stick or collecting those important pound coins, he is always to be found at a local football pitch near you, in his famous green Harps jacket.

As part of his birthday celebrations, tributes have poured in for the man who has seen and done it all in the local game. An absolute legend in the city and beyond, Gerry ‘Doc’ has forged an incredible legacy over decades in the game, and his contribution hasn’t and will never be forgotten.

“I hope you have a great day Gerry; you deserve it. You have become part of my own family personally in the last few years. You have been nothing short of amazing to me and my family; the two boys Cian and Bobby really look up to and respect you for what you do for our amazing club. It does not go unnoticed.

“The word of DOC is all around the country and further afield and it all boils down to your commitment to the game for all these years. For me personally, you have really helped as a coach. You have also given me tireless advice nearly every day and you don’t even realise you are doing it. It’s all part of your nature, so caring and always worrying about everyone else and every team/ coach that we have. From me and my family, I hope you have the best birthday ever. You deserve it. P.S Stay away from Tagg’s garlic chips!”

“Each of these young men came up through the youth ranks at Foyle Harps, all under the watchful eye of our legendary chairman, Gerry Doc. I mentioned this as a remarkable feat for te club to Gerry at the time but he was more interested in talking to me about an under 15 match he’d been at the previous day!

“While he no doubt enjoys seeing past players go on to play at the highest level, this isn’t what has motivated his remarkable contribution to youth football in Derry.

“Gerry’s love for the game of football and passion for being involved in his local community are evident to all those who have had the privilege of working closely with him as players, coaches or committee members over the years.

“His enthusiasm for the game is contagious and he has inspired many former Foyle Harps players to return as coaches and committee members throughout the years to put something back into the club. Here’s his thoughts on youth football, in his own words taken from an article he wrote back in 1992 for the club’s 75th anniversary magazine. Words which he’d still stand by today: ‘Youth football is not about winning, it gives the boys who played some great memories, good friends and a sense of discipline. A lot of nonsense is talked about the youth of today, but I have found they are no different from the boys of my own youth, if people take an interest and spend some of their time on them.’ Gerry Doc, some man for one man.”

“It is hard to put into words, as Gerry Doc is some man for one man. Doc has been rattling his pocket full of coins at me for many years now. Doc got me to Foyle Harps when I was 6 and I haven’t looked back since. He has created an unbelievable philosophy at Foyle Harps, one that the whole country talks about. Doc’s legacy will reign forever.”

“Speaking from my own perspective, Gerry ‘the legend’ doc was a strong influence on my life since I was 7 when I joined Foyle Harps, until I was 15 when I got a breakthrough and had the opportunity to go play my football across the water.

“Firstly, he got me my first trials at Notts County were he was highly thought off. He actually drove me to the airport, one of the many times he would do this. That just underlines his work ethic as he stopped at nothing to give me the best opportunity to be a success in the game.

“He opened every door possible for me and I've a lot to be thankful to him for as do many boys and men that he gave these opportunities to and continues to do. The man is a legend in every sense and this sort off commitment and enthusiasm will likely never be repeated again as the boys sing now there's only one Gerry Doc.”

“My favourite memory is at the Daisyfield playing a year up for the under 13s. I think we were winning 3 or 4 nil. We were cruising then we a got a player sent off. Doc took off his peaky blinder hat and fired it into the wind brushes. For about 10 or 15 minutes he had us looking for it at the end of the game.

“On a personal note, the man has been then from my first day and is still there today. Be it the underage or men’s summer D&D team, he is there, rain hail or shine. Hand of God, what once was a pound is now three. I couldn’t believe it the first time he asked me for it.”

“I remember Doc asking me to go to the trials for the Milk Cup and I said ‘aye no bother’. Then on the Sunday I didn’t go. He then saw me at a match on the Tuesday said ‘Saul why weren’t you at the trials?’ I said ‘I was up watching the wrestling on Saturday night so I was up all night’. You couldn’t print his reply.

“On another note, that was only the start. I wasn’t one to trust as in a semi-final at the Daisyfield against Tristar, some boy kept telling all his team to break my legs. I said ‘shut up you slabber’. He said ‘You shut up or I’ll break your legs’ so I took my top off, walked off the pitch. You could imagine Doc’s face – ‘Saul, where are you going?’

“I said ‘Over to this boy who’s going to break my legs’. I got into it with him and put my top back on but to my amazement there was a red card straight in my face.”

“He’s the grumpiest man you’ll ever meet, but he’s been brilliant for Foyle Harps. He’s a good man and my favourite memories with him are the time we won the Northern Ireland Cups. I think we won something like four cups in five years, and that was a special time for us all.”

“When you think of Foyle Harps you automatically think of Doc. He is the heart and soul of the club. My best memories would be of the tournaments in Ayr, they were always the best of crack and you could see how much it meant to him seeing the club do well over there. Also, every week you could count on him standing at the gate waiting to collect the pounds!”

“Happy 80th birthday to Gerry Doc, a true living legend. Nobody I’ve met in the beautiful game has put in so much effort, unselfish work, time and commitment, all voluntary for the cause of one club. Foyle Harps and everyone involved in this brilliant club presently, and for the past 50 years, owes everything to Doc. Many have come and gone over the years, but Doc has remained loyal and steadfast.

“On behalf of our coaches and players, I want to wish you a big happy birthday. It has been an honour and a privilege to have known and worked alongside you for the past 26 years. We all owe you so much. Roll on the next 80 years!”