'We need that winning feeling back': Derry City manager Higgins 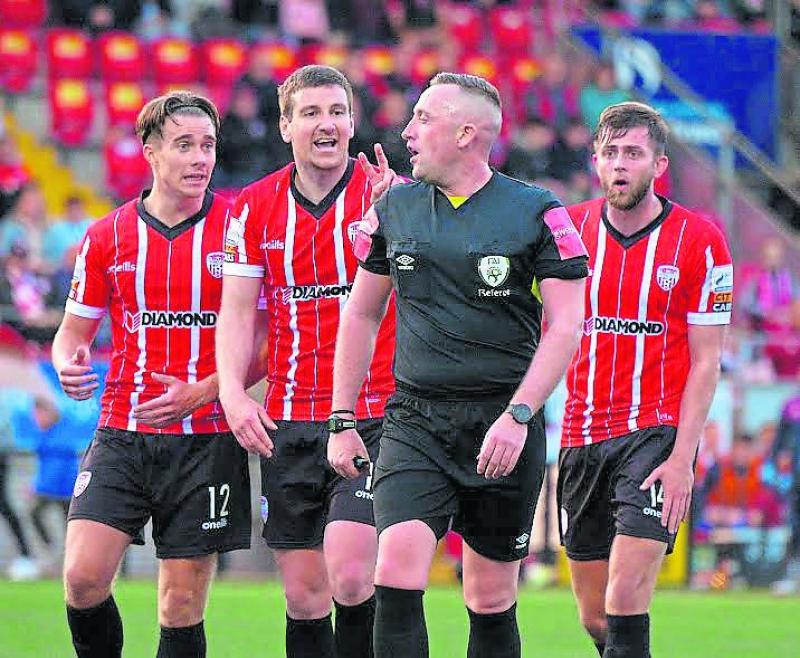 Patrick McEleney remonstrates with referee Alann Patchell over his decision not to award a last minute penalty to City. Photo: George Sweeney, nwpresspics

Derry City manager Ruaidhrí Higgins believes his side need to get back to winning ways as soon as possible after the Candystripes winless run was extended to seven games.

City returned to league action on Friday evening when they welcomed Drogheda United to the Ryan McBride Brandywell Stadium, but despite dominating possession and chances in the game, a first half strike from Mattie Smith was the only goal they could manage.

But the real controversy came late in the second half when Drogheda levelled the game through a Dean Williams penalty after Ryan Brennan was adjudged to have been fouled by Patrick McEleney. And in the final moments, the Candystripes had penalty claims of their own waved away by referee Alan Patchell.

In the end, a frustrated Higgins admitted that his side’s inability to take their chances also contributed to the dropped points.

“That’s what happens in football – especially when you’re not on a brilliant run. We need that winning feeling back. I know we didn’t play brilliantly in the second half, but we did create two or three really good chances and if you base it on chances and possession we should have won the game comfortably, but we didn’t.”

When it came to the moment that ultimately decided the game, Higgins was very clear about what he thought of the referee’s decision to award Drogheda a penalty that ended up being one of only two shots the visitors had on target over the 90 minutes.

The Candystripes’ manager also felt his side were denied a penalty of their own late on.

“We’ve been punished with a penalty that shouldn’t have been a penalty. We could have had two penalties in the one incident – there was a hand ball and then there was a foul. We never got that one and they got theirs,” insisted Higgins.

“I’ve seen it back. You have to know your players and do your homework, and it’s not a penalty. Ryan Brennan has used his experience and manufactured a penalty for himself, and we got punished for it. When we’re in those moments of difficulty, we have to be better and show a bit more composure but we move on.”

In the absence of the injured Eoin Toal, Patrick McEleney was the man who led City onto the pitch, donning the captain’s armband. The concession of the penalty that decided the game is ultimately not the mark he wanted to have on Derry’s return to league action, but he supported his manager’s views on both the referee’s decisions, and where his own side went wrong.

“I can’t figure out how he gives theirs and not (the one for us). I don’t feel it was a penalty for them anyway, but you have to have a balance of it,” he stated. “We didn’t take our chances and it gives them a bit of momentum so it’s disappointing.

Although we lost a wee bit of control in the second half, I still didn’t think they were going to score anything. But if you don’t take your chances, they’re still in the game.

“There’s ups and downs the whole way through the game but if you take another chance and you go 2-0 up that’s it done and the game’s buried, but we didn’t.”

Derry now have to dust themselves down and prepare for a trip to UCD this Friday looking to end what is currently a seven game winless run, but McEleney knows it won’t be any easy task.

“There are positives there, there always is. I think the main thing tonight was putting the ball in the net and obviously we got our goal but we didn’t really kick on enough and we missed chances after it, so we just got punished. There’s no easy games, especially in our league,” he concluded.