Inaugural Sean Mellon Under 11.5 Festival of Hurling a huge success at Na Magha 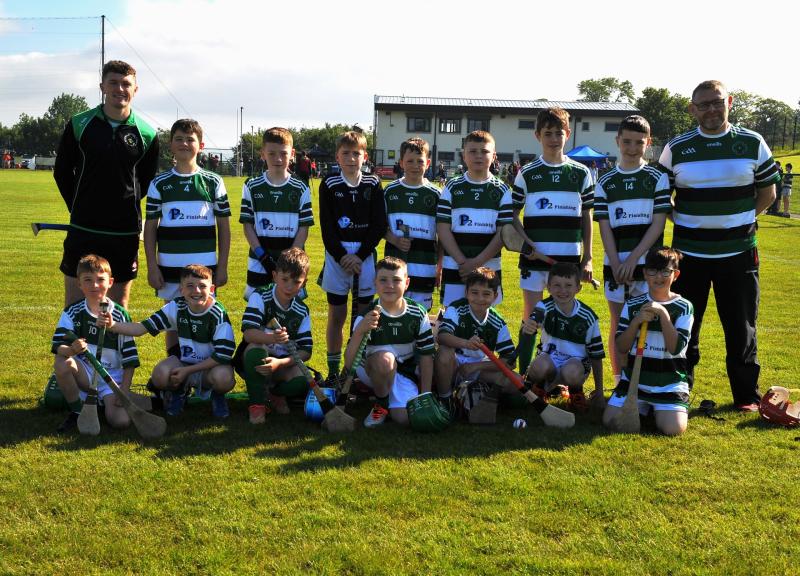 The Na Magha team which participated in the Festival of Hurling at the weekend. Pic by George Sweeney, nwpresspics

‘Hopefully Sean is up in heaven smiling down’.

A magnificent crowd of 240 descended on Pairc Na Magha at the weekend for the inaugural Sean Mellon Under 11.5 Festival of Hurling.

Sounds of laughter, camaraderie and friendship mingled with bright sunshine as teams from Derry, Donegal, Antrim and Cork came together to honour Sean, who sadly passed away last November.

On a day that meant so much to everyone at Na Magha, everything went to plan as clubs throughout Ireland paid the perfect tribute to a truly legendary gael from the city.

For Na Magha Chairperson Eamon Harkin, it was the culmination of six months of hard work.

“We’re really, really happy because 240 kids, coaches and parents turned out on a beautiful day at Pairc Na Magha for the games,” he said. “It was great to finally get here because a lot of preparation went into it, we’ve been flat out for the last six months putting everything together.

“Sean Mellon had built up a great relationship with a fella Al Coughlan from Black Rock in Cork City. They have been taking groups of children down there from the eighties and they have come back up, just to play games and improve their hurling, and there’s been a great relationship built up over the years. A couple of teams came up for this and it’s great to cement those relationships and keep them going now that Sean has passed.”

A new generation of leaders and coaches are now ready to take the club into the future, but always with Sean on their minds, the man who made the club everything it is today in 2022.

“Sean means everything,” Eamon agreed. “He was a well-respected teacher and he was from a family of committed gaels so it was natural that he ended up in the GAA. He played hurling at county level, but where he really excelled was as a coach; he coached hurling in this city for over 50 years. It’s no exaggeration to say we mightn’t have a club with Sean, we mightn’t have hurling in this city without people like Sean. Him and a group of fellow hurling enthusiasts got together in the eighties and formed Na Magha and we were around every pitch in the city before we got our home here.”

The fabulous facilities at Pairc Na Magha proved the perfect setting for the festival on Saturday, a dream which took years of determination to make a reality, thanks to the work of Sean and others.

“It’s a great home and a great base and we are able to put on days like this because of people like Sean Mellon,” Eamon continued. “His legacy lives on because the majority of coaches at the club now have come through under Sean. They are back here training and they have their kids here also so it’s great.

“A special word of thanks has to go to Gerry Matthews, who has been central to organizing all of this. He has done an amazing amount of work on behalf of the club over the last six months and he deserves recognition for that.”

“It’s about continuing on and trying to build and expand now. We have great plans for the future; it’s building that legacy and making hurling as strong as we possibly can in Derry. The U11.5 group was the last age group that Sean took. He was really fond of this team; they are great hurlers and hopefully he is up in heaven smiling down.”