Harry Gregg U15 Cup success at the Brandywell 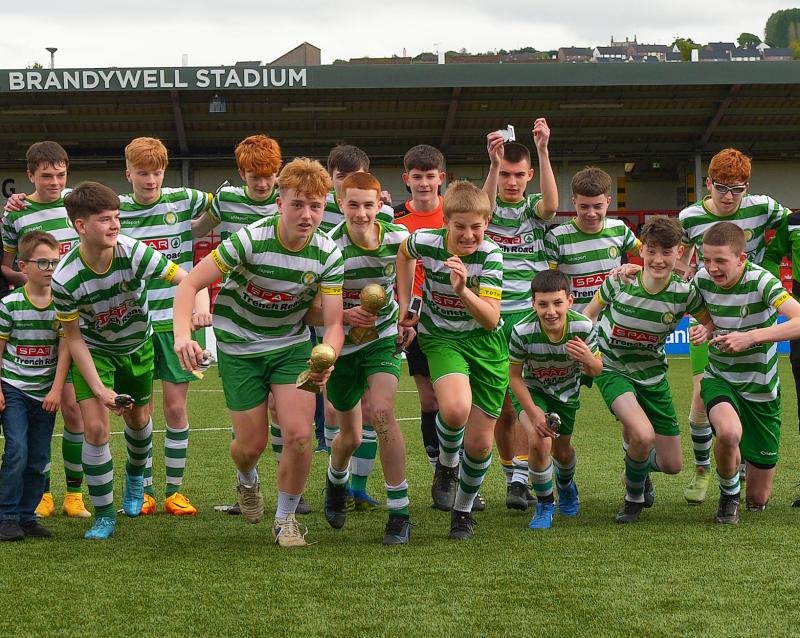 Top of the Hill Celtic 1

Top of the Hill Celtic made it a League and Cup double by beating Tristar to win the Harry Gregg U15 Cup at the Ryan McBride Brandywell Stadium earlier today.

The only goal of the goal was scored by Jack McCarron just before half time, and that looked to be enough until the very last minute of the game when Tristar were awarded a penalty. Conor Parke stepped up to take the kick but despite a well-hit effort, he couldn’t beat Celtic goalkeeper Shea Smyth who guessed right to save the penalty and ultimately the game for his team.

These teams were no strangers to each other having played each other four times during the season, and on each occasion there was very little between them. But it was Top of the Hill who came into the final on a high having won the league title, hoping to make it a double against a very well organised and talented opponent.

There was nothing to separate the two teams at all until the final few minutes of the first half when Top of the Hill took hold of the game and scored the important breakthrough goal. The goal was down to the sheer persistence of substitute Leighton Shulberg, who won the ball on the byline before swinging a cross into the area where Jack McCarron arrived to rife the ball high into the roof of the net to make it 1-0.

Tristar were much more lively at the start of the second half and they threatened an immediate equaliser when the skillful Tejada latched onto a loose ball and curled a shot towards the top corner, forcing goalkeeper Shea Smyth into his first save of the game.

Top of the Hill responded very well to that Tristar threat by enjoying a period of threat of their own, with Shulberg providing the trickery on the left wing and Coyle dictating in the middle. Oran Donnoly was not afraid of a shot either as he sent a low effort just past JP McCafferty’s goal from distance. McCafferty then had to save his team when a free kick into the area by Coyle was headed into the air, falling perfectly for Shulberg, whose volley into the ground had to be well saved by the Tristar goalkeeper.

Time was running out for Tristar but then came the late drama. With just a minute remaining, Duddy attempted to bring a high ball under his control but was bundled to the ground from behind by defender Conor O’Donnell, and referee Damien Stewart pointed to the penalty spot. Conor Parke stepped up to send the game into extra time, but goalkeeper Shea Smyth guessed correctly, diving to his right to gather the shot, winning the Harry Gregg Cup for his team in the process.