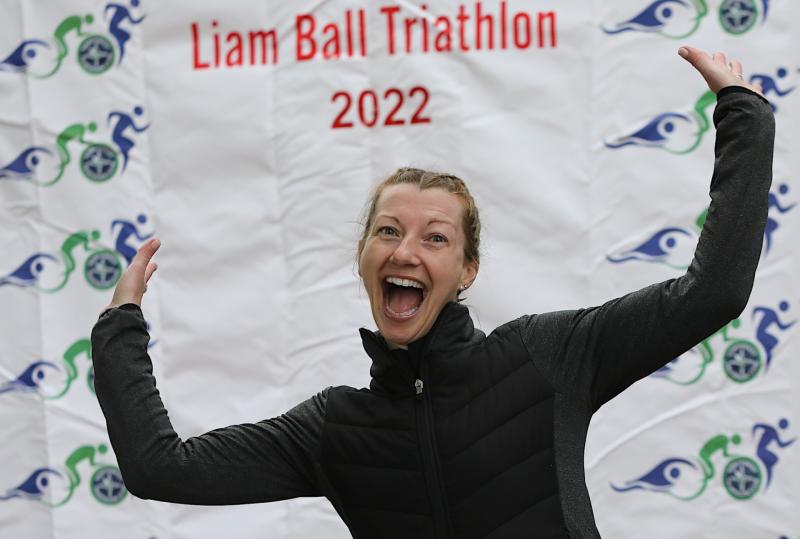 This year’s Liam Ball Triathlon may have been smaller than usual, but the return of the event ensures that the door is now open to make future races bigger and better than ever before.

The popular event, held in honour of the late Olympic swimmer, returned on Sunday past after three years with 103 participants converging on Templemore Sports Complex to not just compete but to catch up with familiar faces from the triathlon scene.

Now in its 36th year, the event was won by North West Triathlon’s Sean McLaughlin, meaning there was the boost of a local winner on the return of an event that has only grown in popularity since it first began.

“It’s just brilliant to get it back up and running,” Race Director Shauna Mullan said. “Everybody in the club was really keen and we have a brilliant team in the committee. All club members, everybody pitched in. We kept it a wee bit smaller this year. We had more demand but we purposely kept it doable because when we did plan it, we didn’t know where we were going to be with covid. We just thought that we wanted to run an event but we won’t go overboard, but hopefully we’ll build back bigger again next year.”

There were no setbacks on the day, and the success of the event has only galvanized those who want it to return to its former glory pre-covid.

“It went brilliant thank God,” Shauna stated. “You’re always a wee bit anxious – biking is always dangerous, but everybody has been very supportive; the police, St. John’s Ambulance, we had the guards – everybody has pitched in and been very, very supportive and it was brilliant. One of our local club members came first and we’re just delighted.”

Triathlon has certainly grown in stature locally in recent times despite the pandemic with multiple ‘Try-a-tri’ events taking place across Derry, not to mention the high-profile success of former North West Triathlon club member Danny Quigley, who has this week been conferred the ‘Freedom of the City’ after his amazing Iron Man success last year. The Liam Ball Triathlon continuously promotes the sport and interest in the event is returning steadily after covid.

“It’s a great legacy and it’s great to have it back,” Shauna continued. “We have a lot of initiatives running throughout the town to try and get people interested again and get people out and doing stuff and being active, with all the focus on how people were being affected by covid and being isolated. It’s just great to have opportunities to get people out and about and be active again, more than anything just meeting each other again.”