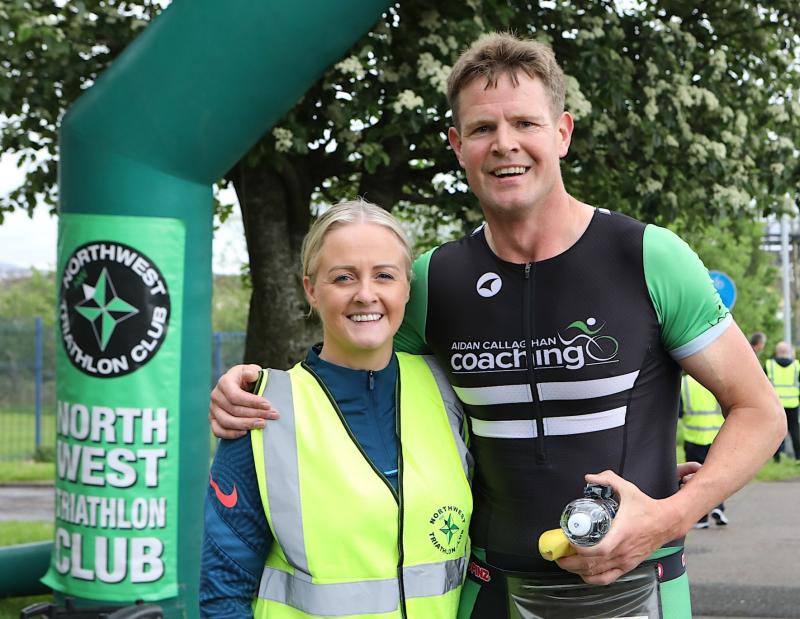 Sean McLaughlin of Northwest Triathlon Club took the honours as the Liam Ball Triathlon made its return today after three years away.

Templemore Sports Complex was a hive of activity this morning as triathletes gathered in celebration as much as competition for the return of the popular event which is now in its 36th year.

For McLaughlin, it was a pleasant surprise in what was his sixth Liam Ball.

“It is a special day,” he admitted.

“It’s nice to put my name in amongst a handful of locals who have won it, so to join that group is amazing. Eight years ago was my first triathlon and it’s my favourite triathlon for that reason, even though it’s a full swim.

"Where I’ve come from in eight years to now is a nice feeling and to be honest, I’ve only really started to let it sink in. I was a bit of a disaster eight years ago with drink and whatever else, so it gave me the kick up the arse I needed to stop everything and push on with triathlon.”

Sean admits that he set out with no lofty expectations, but had belief that he could put in a good performance which could help him improve on his previous best of fourth place.

“I knew I had to swim within a minute or so of the front pack,” explained. “When I got out of the water, I could see them up the hill and knew I was in the race. I knew I was within striking distance.

"Over 750 meters and the sprints, it suits the fastest swimmers, so I never enter these races with really high hopes. I knew if I biked well and ran well, I wouldn’t be far away. It was a nice feeling coming over the line.”

The Covid-19 pandemic saw all local sporting events cancelled for two years, with today’s event allowing Sean and his club mates to reconnect with plenty of familiar faces in a familiar environment.

“2019 was the last time it was on so it’s great to be back racing, especially local races and seeing people about,” he agreed.

“It’s great for everybody.  During Covid we were running wee local duathlons over in Gransha and even wee sprits down at Ludden, just for people to have something to train for. There’s very few people love training all year round with no races, there has to be an incentive at the end of all the training.”