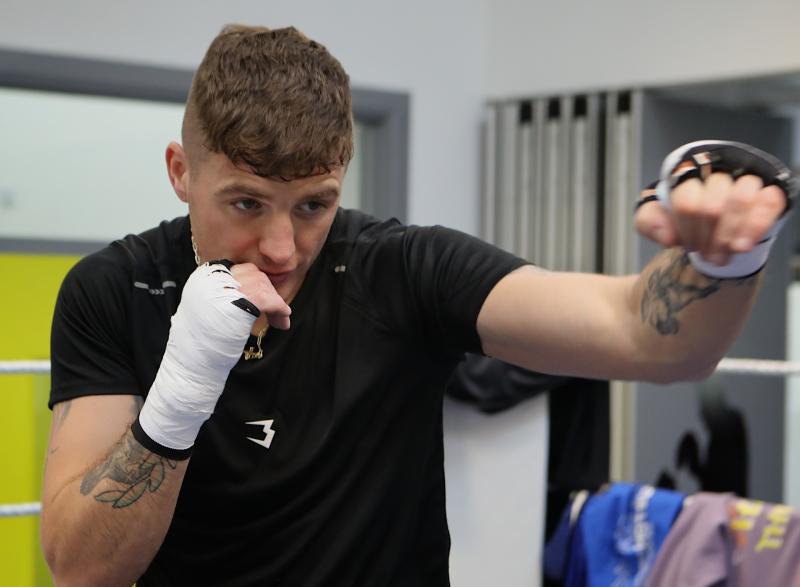 Connor Coye is expecting an explosive fight when he faces Antonio Todd tonight for the NABA Middleweight title.

‘The Kid’, who has a 15-0 record, is ready to take the next step in his career as he aims to break onto the top ten in the world as he continues towards a world title.

Just one man stands between Coyle and his long-time goal of breaking into the top ten and that is a man who shocked many when he defeated Hugo Centeno at the start of the year. Unheralded before that, Todd’s stock has risen since, but Coyle remains confident.

“I’m ready to get going and push on up the ladder,” he said. “Antonio fought a good contender in his last fight, he was at a high level a few times and he beat him so I know he won’t be a pushover but we will be ready for what he has to bring. There will be fireworks on the night and it’s going to be an outstanding performance from myself. Antonio Todd is going to come and bring it so it’s going to be an explosive fight. It will be good viewing and it’s a stepping stone for a world title. That’s how big it is for me – I’m treating this as my world title fight.”

Coyle has put in so much hard work and so many miles travelling to and from America, that he feels he has come too far now to be stopped, and when Antonio Todd steps into the ring with the Derry man in Orlando, he will follow the other 15 opponents Coyle has faced down on his way to this moment, as nothing more than a step in the path of a boxer who firmly believes he belongs at the top.

“Without a doubt this is the biggest fight of my career,” he says. “This is my world title fight. This is a WBA title and this puts me right in the mix to have the opportunity to fight for a world title so this is massive.

“We will get that fight out of the way and we’ll just progress forward from there. I’ll be coming back to Derry after this fight but I don’t know how long I’ll be home for because I could get a phone call just a few days after the fight, which I probably will because I’ll be number 10 in the world. I don’t know when I’ll be back in America, but I’m pretty sure it will be soon.”

At this stage of the game, Coyle will meet more skilled and dangerous opponents than ever before, but he is so eager to be tested at a higher level than he is certain it will only bring the best out of him. He wants the best, because he feels he can beat the best.

“I’m always confident in my own ability. With the level of opponents I’ve been in the ring with so far, I’ve always known I’m better than them. I know the opposition is going to step up, but I know with the top fighters in the world as well, I know that I can beat them. I have the tools to beat them, I have the ability; I’m a middleweight fighter and I have the speed and the power and I have good footwork so I know I have the ability to become a world champion and that’s why I’m confident.”