City stay on top with four-goal display at Inchicore 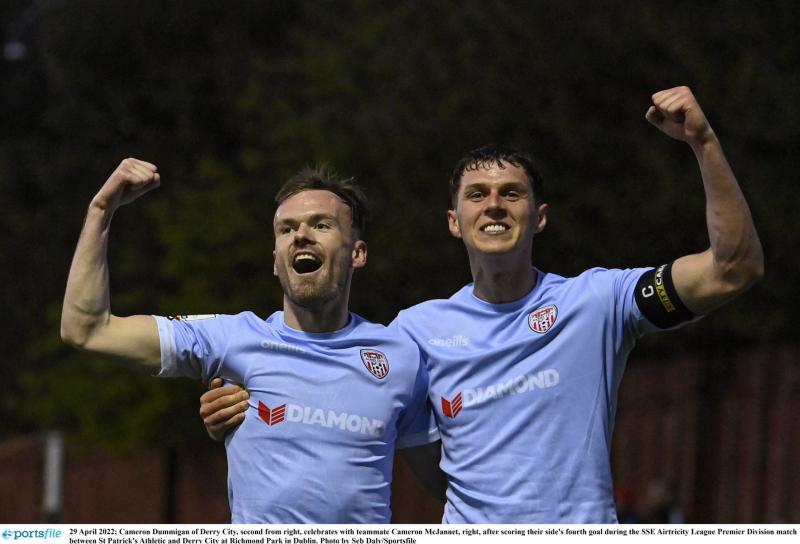 Jamie McGonigle took his tally to nine goals for the season as his double helped Derry City dominate St. Patrick’s Athletic in Dublin.

Ruaidhri Higgins’ men turned on the style again this evening to make it four wins from four visits to Dublin this season.

St. Pat’s could have moved to within four points of Derry City with a win, but they never came close, as the Candystripes were dominant from start to finish.

Derry got off to a sensational start by taking the lead after just four minutes. A cross from the left was deflected out to the edge of the area where Brandon Kavanagh cushioned a pass into the area for Matty Smith and the former St. pat’s man poked the ball past Joseph Anang for his first goal for his new club.

It should have been 2-0 just two minutes later but the officials combined to deny Derry a perfectly good goal. Adam O’Reilly panicked in possession just inside his own area and his rushed clearance hit off Tom Krivosti straight into the path of Jamie McGonigle who hooked the ball over Anang and into the net from close range. It was a beautiful finish but the goal was incorrectly ruled out for offside much to McGonigle’s dismay.

Derry City were well on top and it took a sensational tackle by Krivosti to deny McGonigle on 22 minutes, after the Derry City striker looked to have outfoxed the defender to create a shooting opportunity.

The first half hour was nearly perfect for Derry City and they doubled their lead in classy fashion as Pat’s chased shadows. The ball fell to Will Patching just inside the area and he dummied and feigned to shoot before setting up Smith whose ball across goal was finished off from close range by McGonigle who got the goal his early play deserved.

Pat’s, out of touch completely to that point, finally woke up and could have hit back straight away when a well-worked corner saw Joe Redmond head back across goal and Jack Scott could have done better but volleyed well over the target.

That was a rare chance in a blue wave at Inchicore and Derry City made it 3-0 on 42 minutes with another sweeping move. Cameron Dummigan won the ball in midfield and found Kavanagh who immediately picked out the run of McGonigle, sending the striker through on goal and he made no mistake, finishing expertly past Anang for his second of the game.

It didn’t get much better for Pat’s in the second half. Despite a spirited opening after the restart, the hosts couldn’t get back into the game, and the points were secure on the hour mark when Cameron Dummigan found the net with a spectacular effort from 30 yards to make it 4-0.