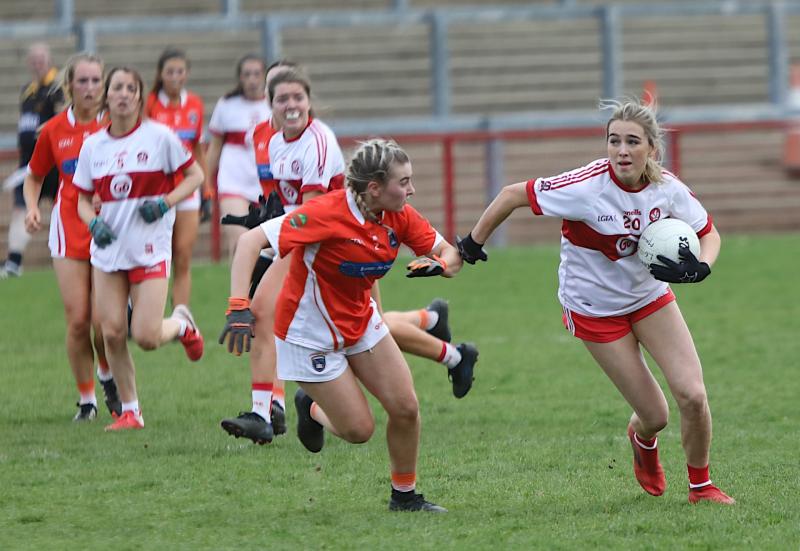 For so long, this game looked to be going Derry’s way as they dominated in possession and scores, at one stage leading by seven points heading into the latter stages of the game. But Armagh refused to give in despite the difficult circumstances, and they finished the game powerfully, chipping away at the score and Derry’s confidence to win the game deep in added time in dramatic scenes at Celtic Park.

Derry were stunned right at the start as Armagh found the bet just 22 seconds into the game. Caitriona O’Hagan was able to run forward unchallenged and she simply passed to Sinead Quinn who rifled the ball into the roof of the net past a shocked Ellie Conway.

The response from the hosts was a good one however as they dominated the ball for the next 10 minutes and scores from Clodagh Moore (2), Dara McKeever and Caoimhe McNally put Derry ahead. It got even better for the hosts when Moore, having just passed up a chance at a goal, took her second opportunity with aplomb, powering the ball high past goalkeeper Niamh Henderson from a tight angle to make it 1-4, 1-0.

Armagh had to work hard to stop Derry from completely running away with it and important scores from Sadie McCusker and Caitriona O’Hagan put them right back in the game ahead of the first half water break.

It seemed that Derry were on their way to a comfortable half time lead when points from McKeever, McNally and Moore took them five points clear by minute 20, but that was a spark to Armagh to start playing. The visitors were much the stronger in the final 10 minutes of the first and scored four of the next five points; Millie Lavery, Kiana Donnelly and two from Maeve Lennon closing the gap significantly with only McNally able to respond for a suddenly tired looking Derry.

A quick score from Lennon made it a one-point game right at the start of the second half, but as they did in the first period, Derry dominated in the aftermath. The Oakleafers threatened to blow their opponents away with scores from the impressive McNally, two from McKeever and then a brilliant goal from Eva Ferguson, who really stood up to help her team through a difficult period to make it 2-11, 1-7.

But there was just no shaking off Armagh and Sinead Quinn got them back on the score board. Jeanette Slevin cancelled that point out with a quick point for Derry, but Armagh began to build some momentum and substitute Rachel McCabe made an immediate impact scoring her team’s second goal with her first touch to make it 2-12, 2-8 right before the water break.

It was all Armagh after that, with the visitors finishing the game so strongly scoring 2-4, compared to 0-2 from Derry.

Annie Kilpatrick started it off well for Derry but it was all Armagh after that, with scores from Lennon and Lavery preceding a goal from substitute Eimear McConaghey which levelled the game at 2-13, 3-10 with just five minutes remaining.

Derry struggled after a yellow card to Eabha Mullan but they still had a chance to win the game when Clodagh Moore went through on goal, but she only managed a point when a goal may have killed off Armagh psychologically.

As it was, they just wouldn’t give up, and another McConaghey point levelled the game again before substitute Ella Reid blasted into the net deep in injury time to put Armagh ahead for the first time since the early stages of the game.

Rachel McCabe put Armagh four points ahead, making the win all but guaranteed in the time remaining, and Derry’s miserable day was compete when Anna McDaid was yellow carded with just seconds remaining.