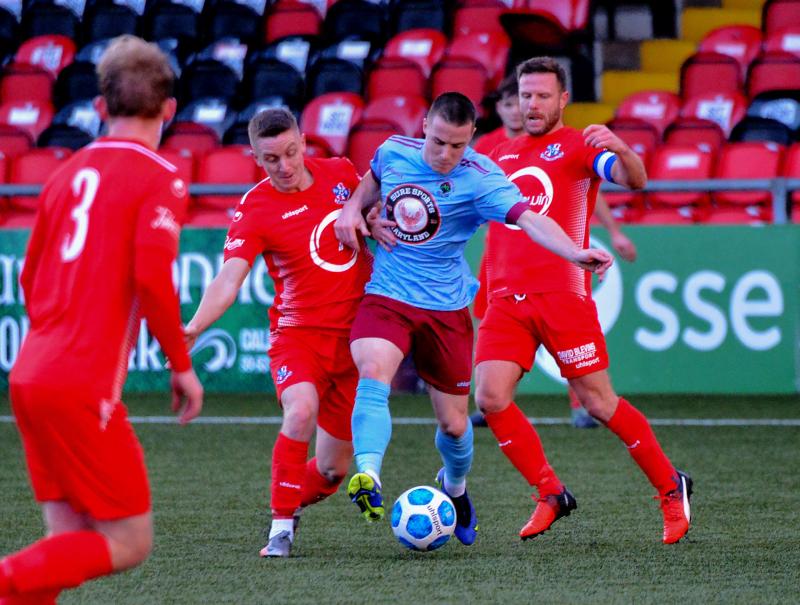 Benny McLaughlin has scored late winners in the last two games for Institute.

Brendan McLaughlin believes that victory over Queen’s at the Brandywell this weekend would all but ensure safety for Institute this season.

‘Benny’ has been the star of the show for ‘Stute this season, scoring 15 goals as ‘Stute have overcome a horrendous start to the season, a change in management and numerous setbacks.

But just when they needed it most, just when it seemed as if the club was in desperate danger of a second successive relegation, things suddenly changed.

Since losing 1-0 to Queen’s at home last month, Brian Donaghey’s team have won three successive league games for the first time, and those wins over Annagh, Knockbreda and Ballyclare have taken ‘Stute out of immediate danger at the foot of the table.

McLaughlin, who has scored last-minute winners in the last two games, including a bullet header against Ballyclare last Saturday, believes that the fitness in the squad is helping them finish games strongly, hence the upturn in recent results.

“Definitely, we’ve found our form at a very important time of the season because we have won the last 3 games,” he agreed. “The players themselves I think, we are the ones on the pitch who are in control of these games. We’ve worked hard in training and improved our fitness so that shows when we’ve scored late in games this season.”

That defeat to Queen’s at the Brandywell last month was a real kick in the teeth for Donaghey and his players, and it also tightened the noose at the foot of the table. It was a bad day all round for ‘Stute.

“Well yeah it was a disappointment to lose to them because it meant they were gaining 3 points on us and it also put more pressure on us then trying to keep that distance from them,” McLaughlin said. “But you have to give them credit for what they are doing because it’s not easy to get the results when you are in bad need of the points.”

McLaughlin has developed a habit of scoring important goals this season but there is no denying his contribution overall, having become an undoubted talisman for the team. Brian Donaghey continues to push him to improve however, and McLaughlin knows that despite his ability to find the net, he can never be guaranteed of his place in the team.

“I’ve been happy with most of my performances this season to be fair but yeah I’m happy to be scoring as long as we are getting results with it,” he said. “It’s a big part of my game and I hope it will continue to help the team.

"Brian and Aidy have been a big help for me definitely he has helped me improve as a player and he has standards that he expects from his players. Even though we joke about how sore he is on me I’ve definitely improved as a player under them.”

Interestingly, ‘Stute meet Queen’s this weekend with both teams amongst the form teams in the division. While ‘Stute have won three on the bounce, the Belfast side are now unbeaten in five winning three and drawing two.

That win at the Brandywell last month really helped kick their opponents into gear and they have now left the foot of the table for the first time, overtaking Knockbreda. With points still to play for, ‘Stute cannot take their safety for granted just yet.

“Definitely there is still a lot to play for at this stage and we’re not safe yet,” Mclaughlin agreed. “But if we get the win this weekend, I would be confident that we are safe then with the form we are in.

“Hopefully all goes well this weekend and that we can enjoy the last few games of the season.”