Seven try win not enough for City of Derry 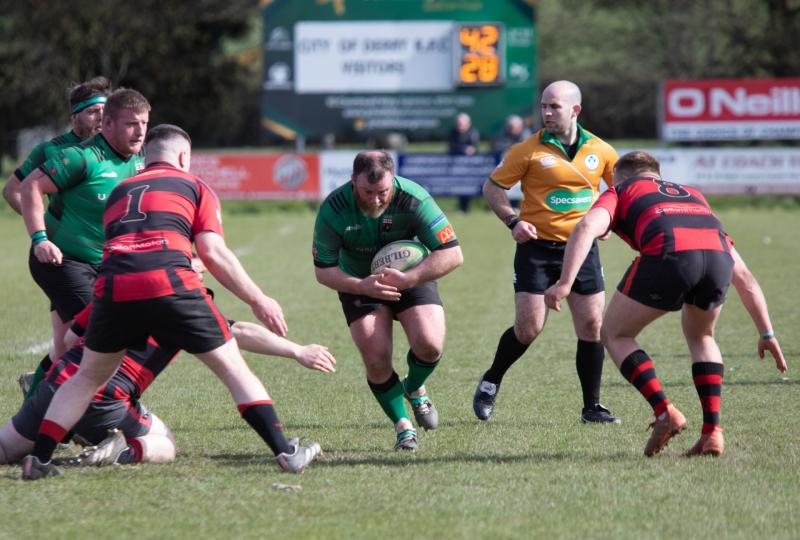 City of Derry Gerard Doherty prepares to break through the Tullamore line.

Richard McCarter remains confident that City of Derry have what it takes to remain in senior rugby, despite a devastating finale to the All-Ireland season which saw Sundays Well kick a 90th minute penalty to consign the Judges Road sign to a play-off.

Whatever happened at Judges Road on Saturday, what happened at Clonmel was equally as important, with few actually expecting the league’s bottom team to do Derry a favour.

But it looked like that was exactly what was happening as Clonmel led 24-22 heading into added time.

250 miles north of the action in Tipperary, City of Derry players were anxiously checking their phones, content that their job was done after an incredible 49-28 victory over Tullamore, thanks in large part to a hat trick from Davy Graham.

The 80th minute became the 85th minute and still there was no sign of a final whistle, but eventually, on 89 minutes, 9 minutes beyond the normal finishing time, word filtered through that Fabien Loughrey had kicked a last gasp penalty to win the game for Sundays Well.

It was a devastating finish for McCarter and his players who now face a two-game play-off, starting at Clonmel on April 23, with the return leg at Judges Road on April 30. 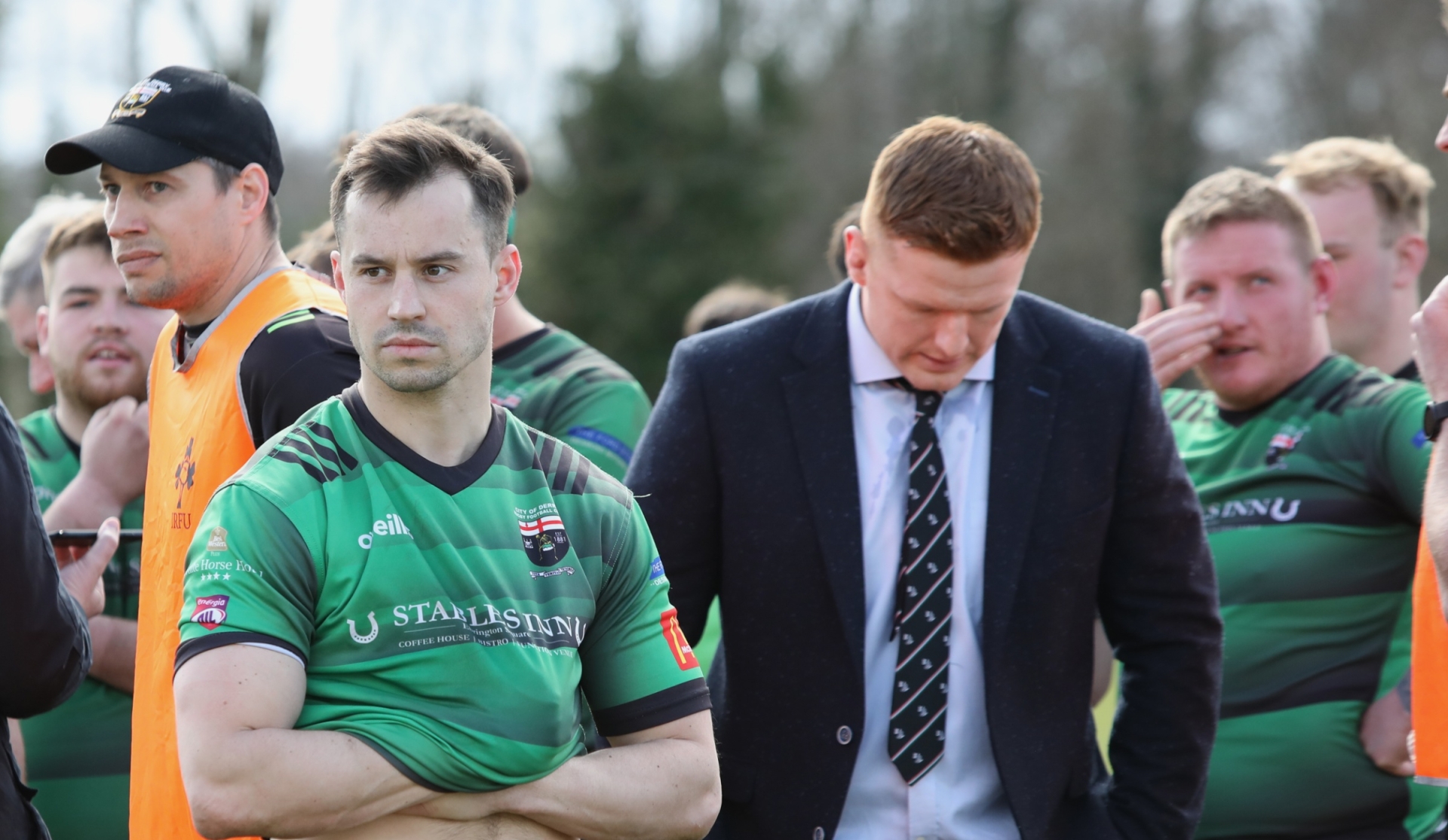 City of Derry head coach Richard McCarter and players after winning their game, not happy that they will still need to have a play-off in the coming weeks. (Photos - Tom Heaney, nwpresspics)

“It was pretty agonising to be honest,” he admitted. “You really want to celebrate and that performance deserved to be the last game of the season. Ultimately, we knew at the end of the game that there was another match down the road deciding our fate. Everything seemed to be going to plan for 90 minutes in that other game, but it’s unbelievable how 30 seconds can change your mood when you hear that Sundays Well have kicked a late penalty. I can’t take away from what we did but it felt pretty difficult.

“Our performance was outstanding at times. The attacking rugby that we played was some of the best I’ve ever seen. We scored seven brilliant tries. If I was being a wee bit critical it would be that defensively we could tighten up a bit but I can’t remember the last time that scoreboard had 49 points on it so we have to take the positives from that and there were absolutely loads.”

It hardly seems fair that Derry suffered this fate given their improvement over the past few weeks, and given the scintillating rugby that they played on Saturday. This seven-try performance was undoubtedly the best of the season and the first time in a number of years that they had hit such high numbers – the previous best this season being 31 points scored in the win at home to Bruff in February. 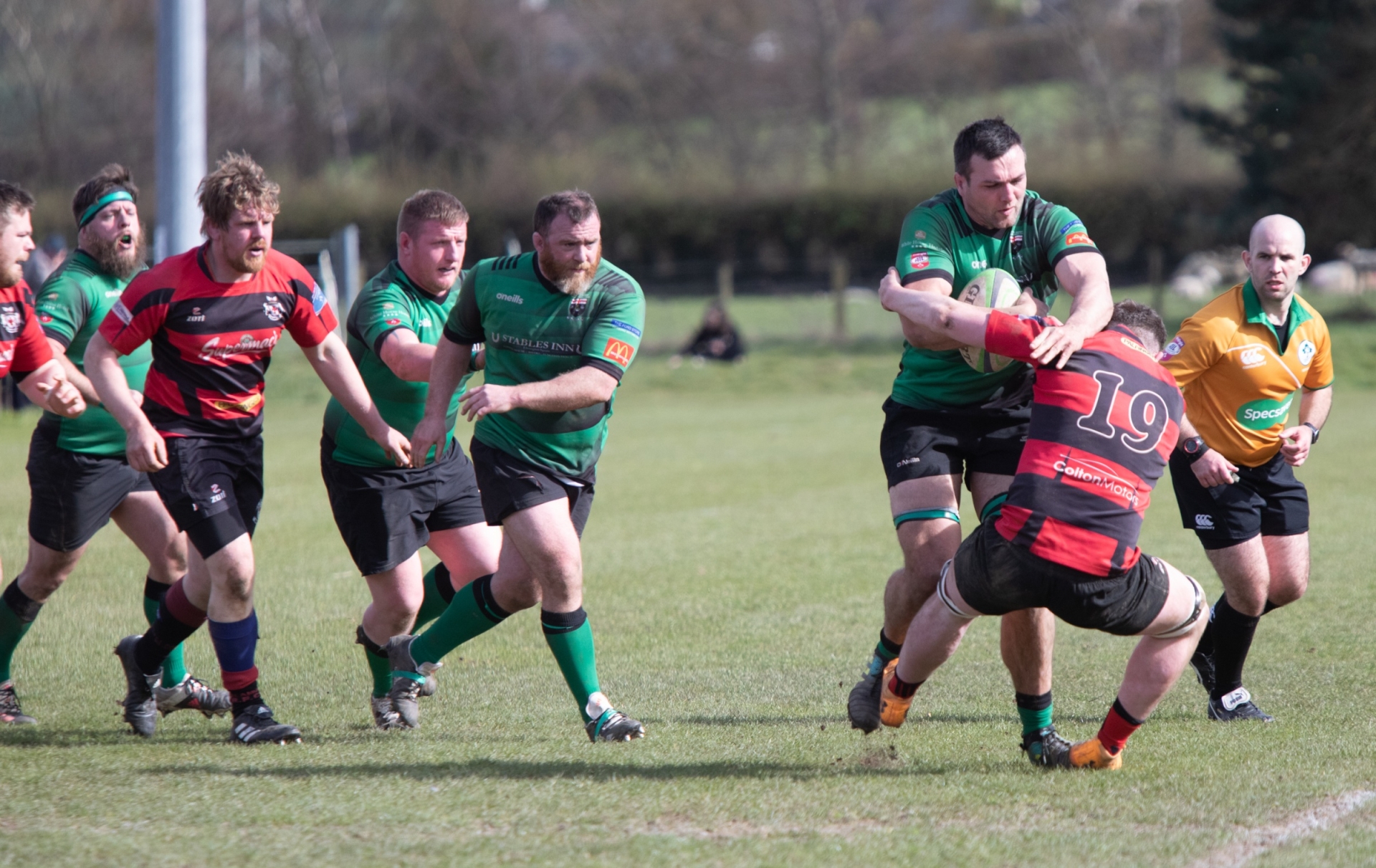 Action from City of Derry v Tullamore at Judges Road.

Not for the first time this season, City of Derry had to come from behind to get the job done. It became apparent very early on that this would be a high-scoring game as both teams launched themselves into attack.

Defensively, it wasn’t an ideal start to the game for Derry, as Conor McGuinness scored two tries either side of Graham’s first, which was set up by the brilliant Simon Logue. With full-back Gerard Doherty yellow-carded, Derry weren’t fully settled and Tullamore took advantage to lead 12-7.

Doherty eventually returned to the field and played a part in his team’s second try, finding David Lapsley who ran in around the back to give Alex McDonnell an easy conversion to make it 14-12 in Derry’s favour on the half hour.

That lead lasted just two minutes before Karl Dunne’s penalty put Tullamore back in front, but a yellow card to Liam Farrell cost the visitors as Derry finished the half strongly with Cathal Cregan finishing off the hard work of Callum O’Hagan to get the ball over the line and give his team a 21-15 half time lead.

Successive penalties from Dunne at the start of the second half brought the sides level at 21 apiece, but that was just a precursor to a dominant second half showing from the hosts.

The flurry of scores started when the bandaged up McDonnell created a try from nothing, breaking through a gap in the Tullamore back line to score before converting his own try. But the best was yet to come, and as usual Simon Logue was at the heart of it. Gathering a long forward kick from Tullamore, Logue raced through half-hearted challenges before producing a scintillating pass to fool the Tullamore defence, giving Lapsley the chance to score his second of the day.

Liam Farrell responded with a try for Tullamore to leave it at 35-28, but that only stoked Derry who finished strongly, Davy Graham showing his talent and determination with two more tries to complete his treble. With McDonnell converting every single one of those seven tries, it was almost the perfect attacking performance from Derry, after which came the nervous wait for news from Tipperary.

“I said to the players before the game, that no matter what happened we couldn’t have any regrets about the season,”

McCarter said afterwards. “At the minute we’re in good form and we have won three of our last five games. I think that shows the ability we have and it also shows the mental strength we have too. 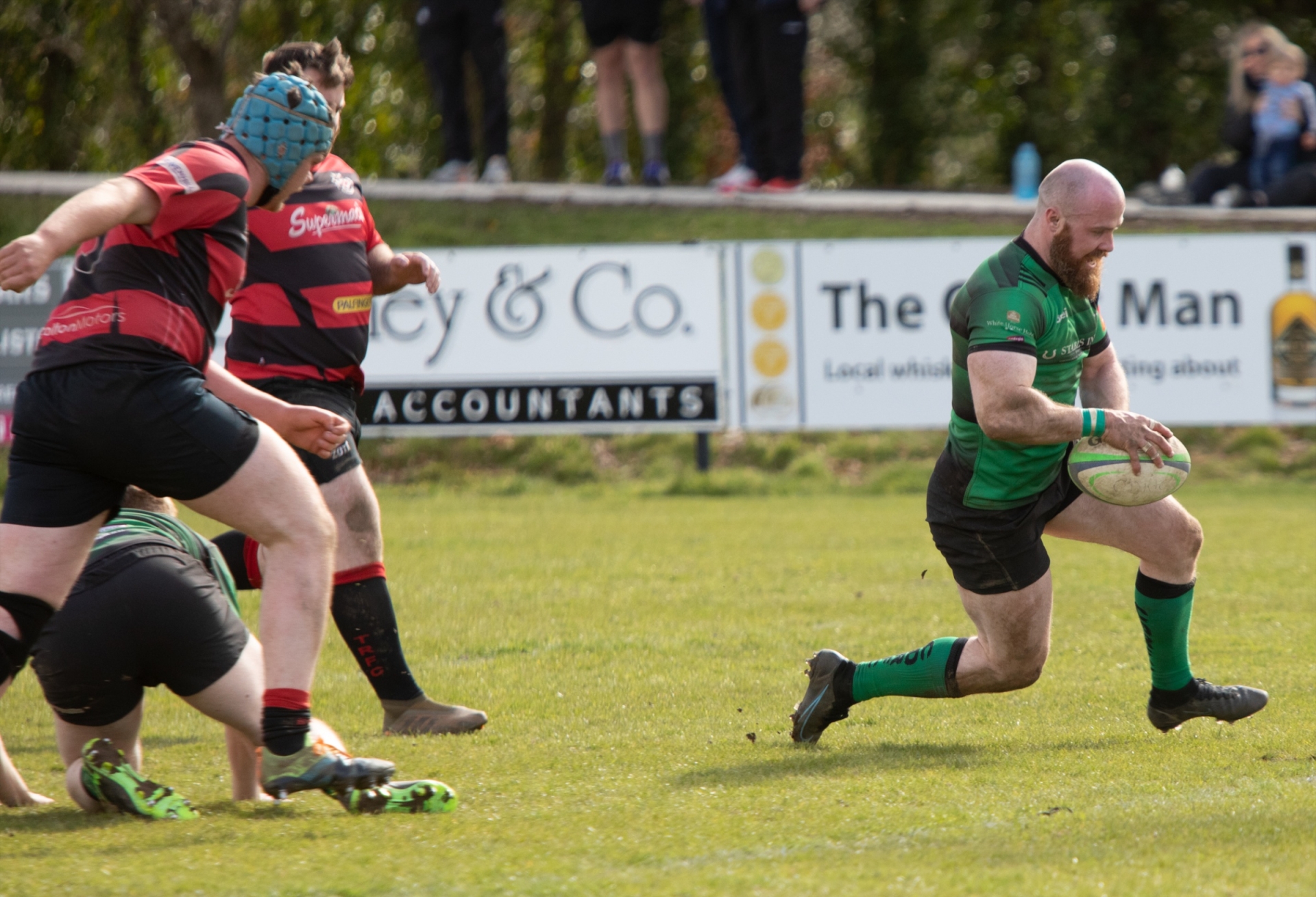 “After we lost to Clonmel down there, that was probably the first time this season that I had a few doubts, but they were quickly erased because we have turned up since then and in the five games since that Clonmel defeat we have won three of them and picked up losing bonus points in the other two that we lost. We go into this play-off now with good form and we have got to look at it positively.

“I think there’s a new focus to us now, and we have to see this as two massive cup finals. Everybody needs to be available to travel and if we do have a full squad I‘m pretty confident that we will get through this. It will be tough at the same time, but we have to back ourselves in this situation.”