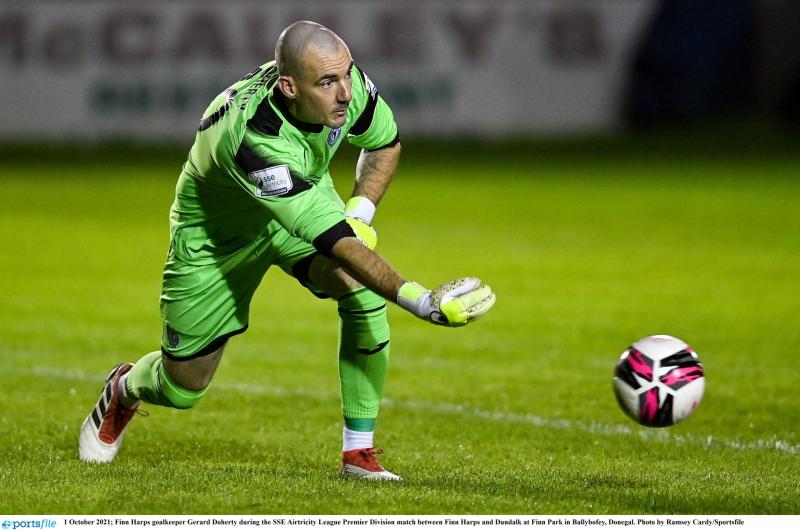 Gerard Doherty is set to play against Drogheda United.

Forty-year-old Gerard Doherty is set to be drafted in between the sticks for Finn Harps’ big game against Drogheda United at Finn Park on Monday.

The veteran goalkeeper is expected to make his first start of the season in the Harps colours as Ollie Horgan has to plan without first choice netminder Mark Anthony McGinley who was sent off in the 3-0 defeat at home to champions Shamrock Rovers last night.

McGinley was shown a straight red card after Rory Gaffney went down as he tried to round the ‘keeper with six minutes left on the clock.

He made eight appearances for Harps last season, making his debut against his old club in August as the Donegal side recorded a historic first ever FAI Cup win over Derry City with Tunde Owolabi getting the match-winner with a 73rd minute penalty.

Doherty played an important role in helping Harps to stay up and was in goals for the 2-1 away win over Bohemians, the 2-2 draw at home to Dundalk, the 2-2 draw away to St Patrick’s Athletic and the 5-0 drubbing of Longford Town on the last day of the campaign.

Harps go into Monday’s game against Drogheda United one place and two points behind the Louth outfit who are eighth in the table.

Drogheda earned a very good point at Richmond Park on Friday as they drew 1-1 with St Patrick’s Athletic, with former Finn Harps captain Keith Cowan being a key figure in defence for the Kevin Doherty managed visitors.