'Bohemians game is all that matters to Derry' - Kavanagh 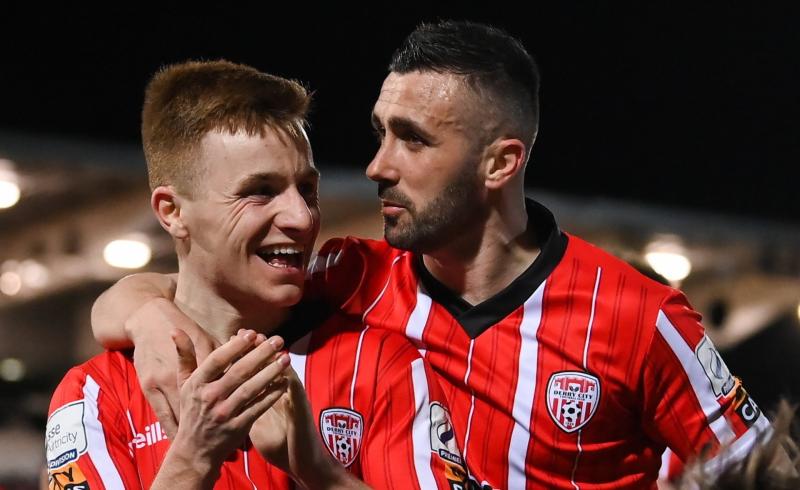 Brandon Kavanagh says his team mates are not looking beyond this evening (Friday) at Bohemians despite the fact that Derry City face a daunting schedule of three away games in eight days.

After a two-week break, the Candystripes are straight back into a heavy programme of fixtures with tonight’s trip to Dalymount Park followed by a return to Dublin on Monday to face UCD.

After that, it is a trip to Finn Harps next Saturday, making it the first time City have played three successive away games in league competition since June/July 2019.

It will be a true test of Ruaidhri Higgins’ team this early in the season, but Kavanagh insists that the only thing that matters to the players at the minute is tomorrow night.

“We’ve had a really tough start to the season with some tough games in there but we’ve loved every minute of it,” he said.

“We’re just looking forward to every game every week but you can’t take your eye off the next game.

“We know it’s going to be a fight. We know Bohs are a brilliant side but we’re just ready to go. We obviously got the few days off with the international break, but we’ve been training and we’re refueled and ready to go.”

Derry City sit top of the Premier Division with 14 points from six games so far, and a key feature of their season so far has been their ability to score late, late winners, which turned potential draws against Shamrock Rovers and St. Patrick’s Athletic into dramatic wins.

Kavanagh believes that the hard work done off the field of play is paying off in key moments.

“It’s unbelievable but it just shows the character in that group and in that dressing room,” he continued.

“We fight ‘til the very last minute. We know the fans are with us; you can see when it hits the 94th or 95th minute there’s not one fan leaving because they expect something to happen. That’s the way we are as well; we fight right ‘til the end and we’re delighted that we’ve been able to win games so long may it continue. As you can see as a squad we’re just really, really fit and we’re playing really well.”

That ability to strike late has been a feature of Higgins’ tenure in charge at the club, with Will Patching’s late winner against St. Pat’s the 21st goal the Candystripes have scored beyond the 70-minute mark in the manager’s 38 games in charge.

Kavanagh agrees that the mentality to keep going right to the death comes from the coaches at the club.

“I think it comes from the top, from Ruaidhri and the staff,” he said. “It’s like dominoes, it just knocks on to the next person and it gets passed through. You hear it before the game – you might not score in the first 10 minutes but it could be the last minute and that’s the winner so we just take that with us and whenever we get the chances we just try and take them.

“We don’t look too far ahead. The chances come about in the games and we have played really well in the games. We had chances we could have taken earlier on in those games, but we’ll take the three points with us and we’re delighted.”

On their last visit to Dalymount Park last September, Derry City were involved in a 3-3 thriller with Georgie Kelly scoring a last-gasp equaliser to deny the visitors the win.

Both teams have been involved in many memorable battles over the years and while Kavanagh knows that another tough game lies ahead, he insists that whatever the circumstances, the three points are all that matters.

“We’re obviously not hoping to concede three goals but we’ll just take the games as they come,” he stated.

“We’re going to work as hard as we can and at the end of the day we’re just going down there to play another game and try to get another three points and that’s what we’re looking forward to.”