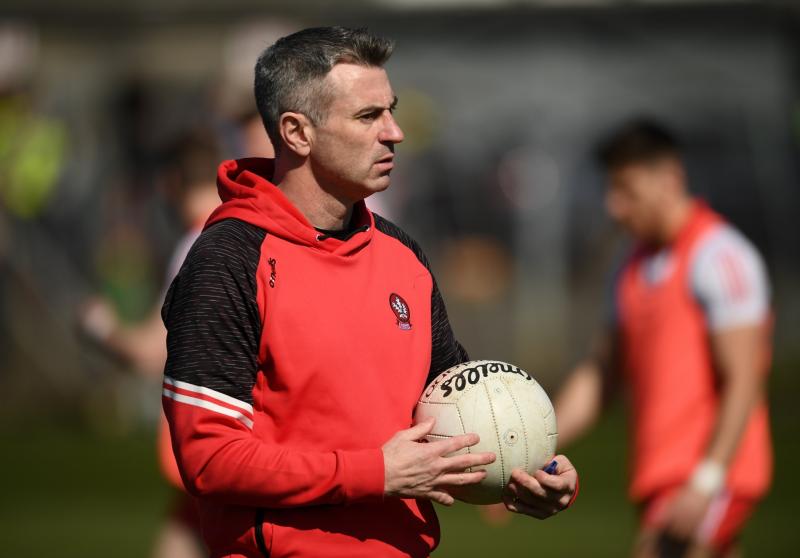 Derry manager Rory Gallagher saw his side miss out on promotion yesterday but believes that important lessons have been learned by his players in recent weeks. Photo: Philip Fitzpatrick/Sportsfile

Rory Gallagher believes that Derry’s league campaign was ‘a serious success’ despite a frustrating conclusion which saw his team miss out on promotion to Division One.

Victory over Meath yesterday saw the Oakleafers create an unfortunate bit of history as they became the first team to finish on 11 points and not win promotion since the new format was implemented back in 2007.

Derry showed plenty of character again in yesterday’s win, overcoming a five-point second half deficit to win, but with Roscommon overcoming Galway, it meant a third-place finish for Gallagher’s team. Reflecting back over a contentious few weeks, Gallagher believes that things could have been so different.

“If you go back to Roscommon where I feel we were very badly wronged,” he said. “Shane McGuigan should have been on the field to kick the inning score. Last week we made a lot of mistakes and we made some today as well.

“I thought this time we came out and we showed a lot of mental strength and we started the game really well, but then we conceded a goal from our own mistake, but that’s the way it goes. I felt in the second half we controlled a lot of the game and missed a lot of chances but we have 11 points having come out of Division 3 and we were in Division 4 not that long ago so it’s not the worst result.”
There will be a short break now before Derry head into the Championship and the lessons of the past few weeks will not be forgotten.

“I think we’ve only suffered one defeat in 14 league games, albeit we want to play against better quality teams,” Gallagher added. “We have a very committed group of players and we enjoy spending time with each other and we can’t wait until the Championship now. There was unbelievable heart and desire today and a lot of quality as well. Overall, I’m very, very pleased.

“There are lessons to be learned, even today, but particularly down in Roscommon. With 12 or 13 minutes to go we probably should have seen it out and Shane’s sending off shouldn’t have counted. But we are where we are; 11 points usually gets you up but it doesn’t now. We have the Championship now but if you had asked me at the start of the year would 11 points be enough, I would have said yeah.”

Despite his evident frustration with events in Roscommon and Galway, Gallagher very much believes that the county is heading in the right direction.

“We didn’t cover ourselves in glory last week and we got a point out of that. It was a test and any good team faces tests. The Dublin six-in-a-row team just didn’t arrive, and Tyrone just didn’t arrive, they had tough days and when I was involved with Donegal, we just managed to stay up on the last day of the year in 2012 and we went on to win it so you have got to make the most of the wee breaks you get.”

Heading into yesterday’s games, the odds of promotion were slim, but looking at the picture overall, Gallagher believes it has been a very positive campaign.