Setback for Derry minors with defeat to Donegal 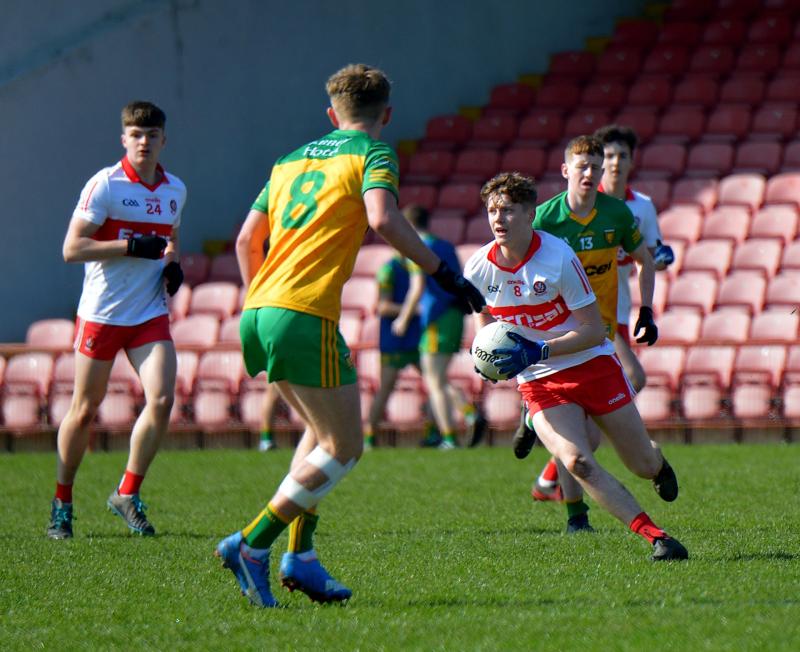 It was a disappointing day for Derry minors falling to a three point defeat at the hands of neighbours Donegal at sun-kissed Celtic Park.

The result ended the Oakleafer’s winning run at the top of the league, with victories over Sligo and Cavan already on their ledger. Victory in their final outing against Fermanagh now appears all but critical if they are to progress to this year’s league final.

Derry led by three at the break, but in truth failed to get out of second gear after the interval, with a late Karl Joseph Molloy goal ultimately separating two well matched sides in Donegal’s favour.

Missing star man Ruairi Forbes and a number of others, free-taker Ryan McNicholl top scored for Derry, with Cahir Spier and Ciaran Chambers also catching the eye and bagging a brace of points apiece. Goalkeeper Ben O’Connor also impressed under the high ball and pulled off a stunning save midway through the first half.

Centre half back James Murray was the pick of the Oakleaf defenders, diving heroically to deny a Donegal goal late in the first half, an effort that ultimately brought an early end to the Magherafelt player’s day through injury.

Unbeaten Derry promised much in the opening thirty minutes and should have been further ahead than the 0-8 to 0-5 half-time score.

Glen’s Johnny McGuckin opening the scoring, with points from Cahir Spier (with two) and Ryan McNicholl racing Derry to an early 0-4 to 0-1 lead.

However, a fifteen minute power play, with five consecutive scores either side of half-time, pulled Donegal level at 0-8 each by the 40th minute.

Derry found some composure and hit three of the next four scores to lead 0-11 to 0-9 as they approached the home straight. McNicholl swung over his fourth and fifth free of the day before Slaughtneil cub Conor Coyle accounted for Derry’s final point of the day.

Momentum in sport is a wonderful thing to have but a deadly one to lose, and Donegal worked themselves on the right side of it with the game approaching its denouement.

Towering midfielder Lorcan McGee, brother and clone of Donegal senior star Jason McGee, pulled a couple of high balls from the skies and nailed a crucial late point. McGee’s midfield partner Cian McMenamin followed suit with a point of his own to level the sides at 0-11 each.

But Derry never convinced. They’re opponents had the bit between their teeth and, roared on by a vociferous travelling support, produced the winning move of the contest. The Tír Conaill won a very debatable free, not their first of the day either, which found its way to Karl Joseph Molloy who ghosted through Derry’s rearguard to fire home the game winning goal in the 60th minute. 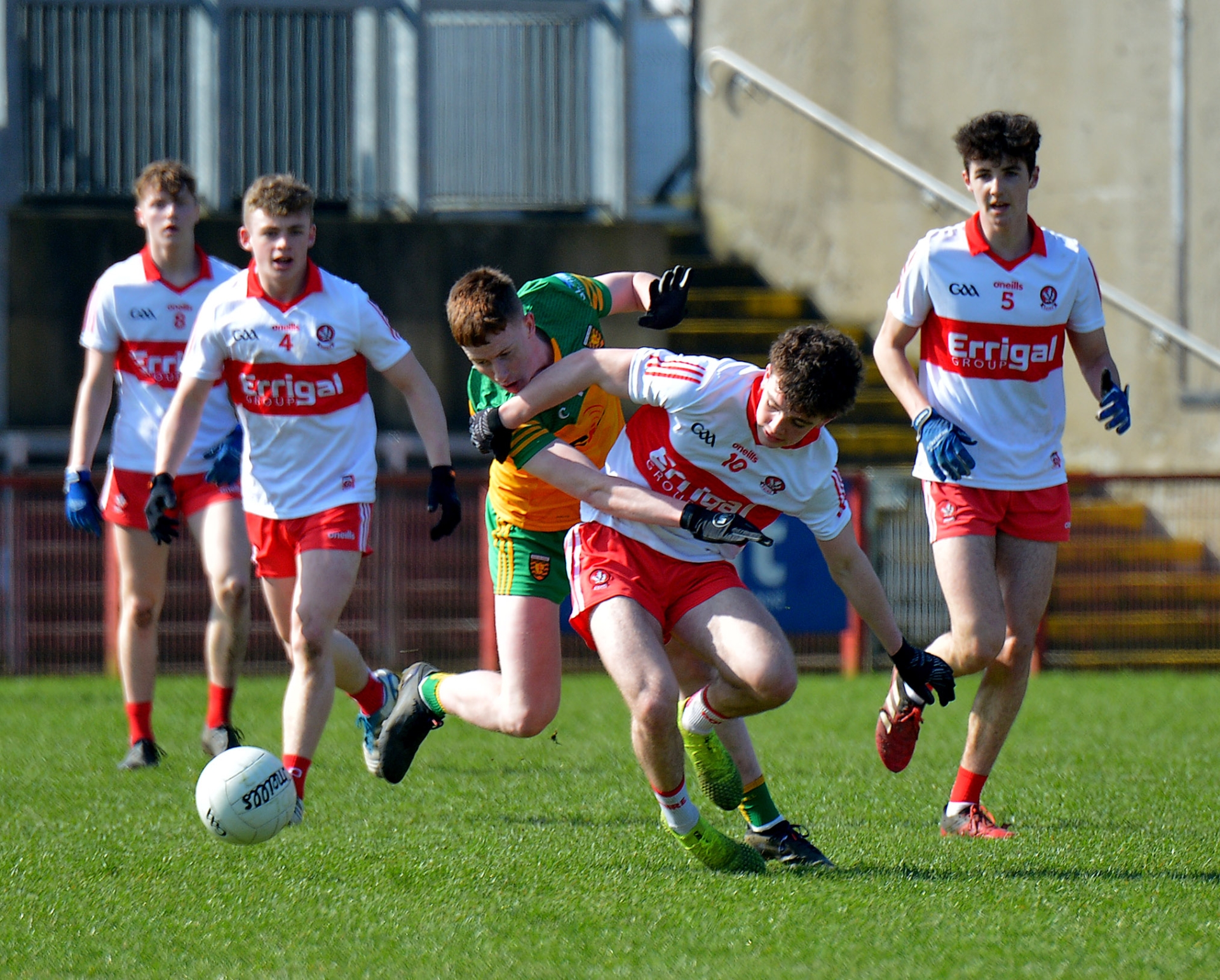 The Oakleafers had enough time to work another score but their error prone second half continued to dog them right to the end with Donegal running out three point winners.

Derry manager Martin Boyle cut a philosophical figure after the game, and was happy to take any lessons from defeat. “I’m delighted with the game because we’ve played weakened Sligo and weakened Cavan sides and you learn absolutely nothing. There was a real bite to this game, a bit of a championship edge to it.

“To get a game like that a month out from Championship is invaluable,” continued the former All Ireland winning manager. “There will be serious learnings for our boys in terms of the standards required – physically, athletically, tactically – from a really good Donegal team.”

The Ballinascreen man accepted that, having led by three at the break, his side struggled to find any rhythm in the second half. “They’re cubs, they’re sixteen, seventeen years of age,” he explained, “and they have to learn at this level and taking your chances is a big part of it. I was disappointed with us in the second half.

“In an attacking sense we didn’t really get going,” he continued. “We have to learn from that, you don’t get that in the training field and that’s invaluable for our preparation. We’ve only had the boys three weeks since the schools’ football finished. A defeat, where they’re a wee bit down - that’s where character comes into it.”

The result now leaves a tightly contested bottleneck at the top of the table with victory away to Fermanagh still offering up the proposition of a league final for Derry. 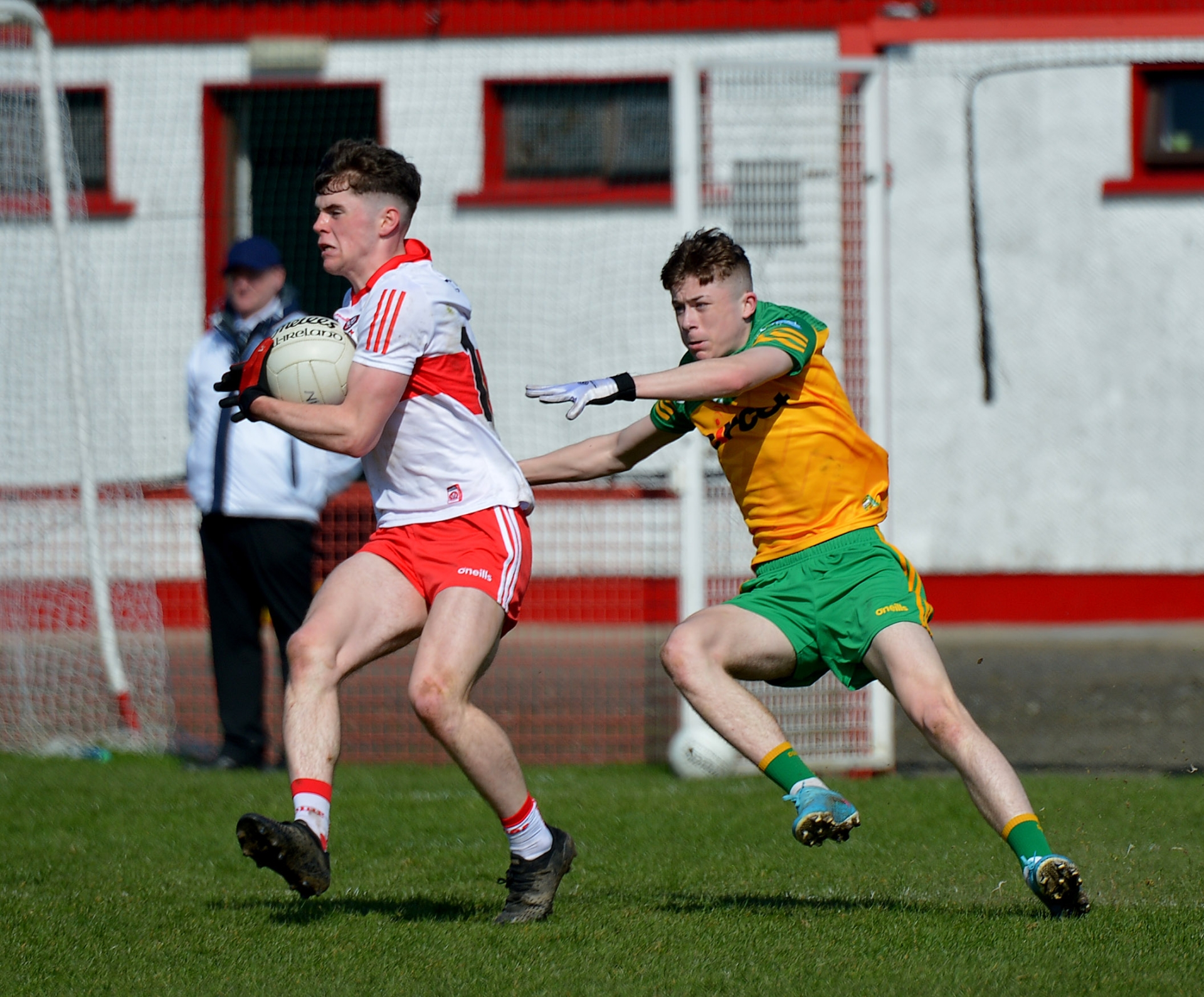 Derry travel to Fermanagh this Saturday, with a noon throw-in for that must-win game.