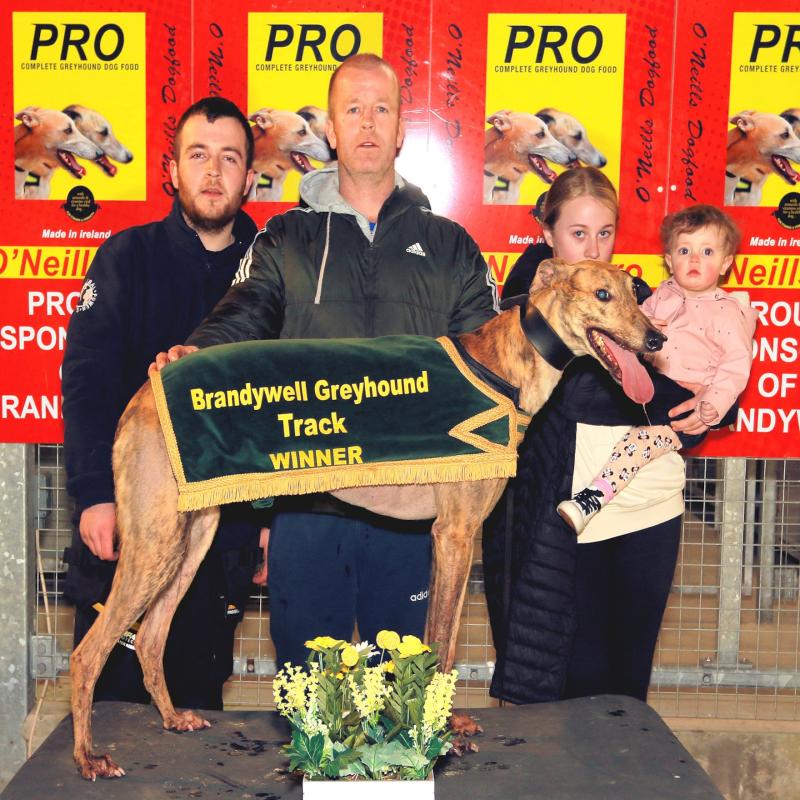 There was an exciting 7 race programme at Brandywell on Monday and the prizemoney was boosted by the Track Lotto Team who do excellent fundraising work at the track.

Smearla Brae (Eden The Kid x Ballyfidora Brae, Jun ’20) won the first race for Michael Farrell in 17.28. He used his trap 1 draw to good effect by tracking around the inside at the bend and took up the lead from Tullys Luna on the home straight to win by 1 length.

The second race was won in impressive style by Kenyan Flame (Laughil Blake x Wee Tee, Oct ’20) who was fast away from trap 3 and won in 16.71. It was a fast run by this pup who finished 7.25 lengths ahead of her nearest rival for owner Sean Hughes. This was the first pup from her litter to race and there will be plenty of interest in her siblings when they make their track debuts.

Black On Black (Magical Bale x Generous Daisy, Oct’20) won the third sprint for Peter O’Kane in 16.91 from trap 2. This pup set off in hot pursuit of the early leader Smokey Louie who moved middle coming out of the second bend and Peter’s pup took full advantage of the gap on its inside and ran on strongly up the home straight to record her first career win. She is also the first pup to win in her litter.

We switched to 500-yard action for the fourth race. Titanic Jay (Droopys Roddick x Titanic Lizzie, Jul ’19) was moderately away from trap 5 and was looming large on the shoulder of the early leader Dyno Magic as they approached the third bend.

Jay rallied around Magic’s outside and ran on strongly up the home straight to win by 4 lengths in 27.97 for James Campbell from the running on Indian Swift. It was an impressive performance by Jay and he has shown that he has a competitive attitude which should win him plenty more races.

Deeneys Delight (Droopys Roddick x Burma Milly, Jan ’20) trapped well from the 2 box and led all the way in the fifth race for owner Rodger Hegarty from Letterkenny. Patience has been the key to this lad who won his first race almost 6 months ago and he delivered a career best performance with his 6 length, 28.12 victory on Monday. You can read an update on Deeney’s dam, Burma Milly, later in this article.

The only 525 yard race on the programme was won by Constanza (Good News x Kelseys Queen, Jul ’19) in gritty fashion. She trapped well and was challenged throughout by a tightly packed field but she dug deep up the home straight to win by 1 length in 29.80 for owners Pius McIntyre and Stephen Radcliffe.

The striking looking 72 pound, white and fawn bitch, Hunters Bella (Crafty Gonzalo x Following Lights, Jan ’19) won the last race in 16.81 for the O-C-C Syndicate. Fast away from traps, she opened up a lead going into the first bend and ran on well to win by 3.25 lengths from her nearest rival.

This was a first career success for Bella and she ran the Brandywell circuit very well. Hopefully plenty more success to come as she gains more racing experience as she is lightly raced for her age.
The privileged life of a greyhound from puppy to retirement.

Anyone who follows greyhounds on the internet over the years would be familiar with Facebook (FB) sensation, Burma Milly. Her owner/breeder, Mark Duffy, shared footage of Milly as she grew up in Letterkenny and embarked upon a successful racing career.

The stunning fawn puppy captured the hearts of many across the world and she had a large fan club who celebrated her 9 career wins.

Mark had posted a FB video of part of Milly’s training routine which involved regular physio checks and massages to ensure she was fit for racing. 5 years later and the video has almost 8 million views and is still being shared on FB.

Race 5, 500 Yds. It was won by DEENEYS DELIGHT in a time of 28.12. Pictured from left we have Mr Andrew White & Mr Roger Hegarty, from Letterkenny Co. Donegal. Photo courtesy of John Killen.

Milly went on to have a litter of pups to carry on her legacy when she retired from racing and last year she was adopted by one of her biggest fans, Jutta Hochgrafer, who lives in Germany.

Deeneys Delight is one of Milly’s pups and he treated us to a wonderful athletic display when winning the 5th race at Brandywell on Monday.

As Milly looks forward to her 7th birthday, she is keeping active with Jutta and her other dogs in a lifestyle that she loves.
It has been lovely for her fans to be able to follow her life since the day she was born and we thank Jutta for sharing her adventures in retirement with us.