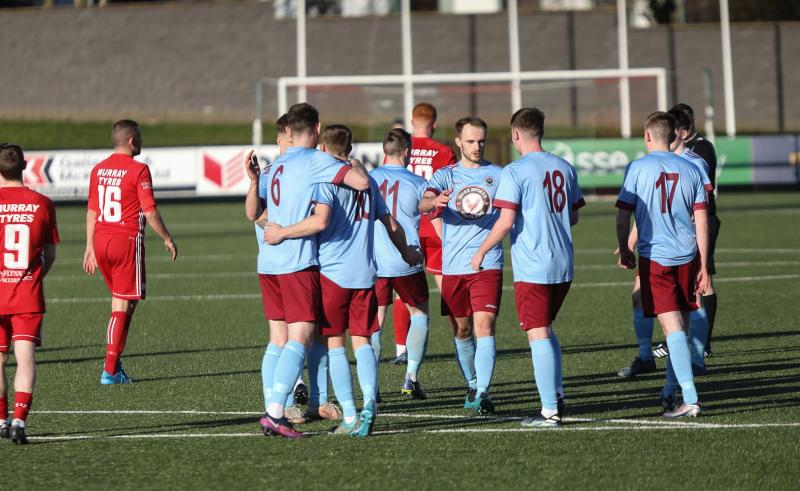 Institute head into this week’s game against Knockbreda on the back of their biggest win of the season against Annagh.

Institute’s fate is in their own hands as they head to Knockbreda this weekend with the exact same number of points and the exact same goal difference as their opponents.

On the same day that Knockbreda were conceding five goals at Ards, ‘Stute were hammering five goals past Annagh at the Brandywell, really tightening up things at the foot of the Lough 41 Championship.

Having lost so poorly to Queen’s just a week earlier, no one, not least of all Annagh, expected much from ‘Stute against a team pushing for promotion, but an Ivan Parkhill hat trick in a dominant display earned ‘Stute a massive 5-1 victory and three very valuable points.

It was an inspiring display from ‘Stute at just the right time.

“We just looked as if we were going to score every time we went forward,” manager Brian Donaghey said. “It was just chance after chance and block after block and their goalkeeper does well. It was brilliant that we were very forward thinking and we looked dangerous in our attacking play.

“We spoke before the game but I didn’t have much to say, but the one thing I did say was that ‘It is not about ability in this changing room’.

“Maybe it was about mindset, belief or confidence, but definitely not ability. It is so frustrating because against Loughgall we played just as well and got beat and then we had Ballinamallard and we thought that was going to be the game to turn our season around then we had a blip.

"But if we get that level of consistency and that level of performance – and the work rate was unbelievable as well – it shows when your tails are up and you smell blood which we did.”

Wins have been few and far between for ‘Stute this season with last Saturday’s only their eighth in 32 league games. Yet it was the manner of the performance, perhaps even more than the three points, which has really stayed with the manager since.

“We have to take it into the next game because it means nothing if you’re not going to continue in that vein,” he insisted.

“The boys will feel good about themselves and hopefully that’s a confidence booster.

"It was down to one thing and that was aptitude and their intensity in their play. That should be a given and I have stressed it to them – they are a talented bunch of lads, and I’m telling them that week in and week out. That’s why I’m pulling my hair out at times, but it came together against Annagh and I’m so happy for every single member of the squad and the staff.”

‘Stute have a real opportunity to move out of the bottom two this weekend just in time for the end of season split. To do so would be a significant boost psychologically.

“Instead of looking back let’s look forward and try and get a run of results,” Donaghey continued. “The next game is absolutely huge, and you can’t play it down. If we play like we did against Annagh I am very, very optimistic of getting a result.

“Knockbreda are fighting for their lives as well and they always score. They have scored something like 70-plus goals. I know they have probably conceded a lot but they score on average 1.7 goals a game.

"They will put it down like a cup final, while I will try to play down the importance of it, even though there’s no getting away from the importance of the game. You only get three points if you win 1-0 or 5-1, but I think it’s a message and I’m just glad for them. They deserve it because they work really hard.”